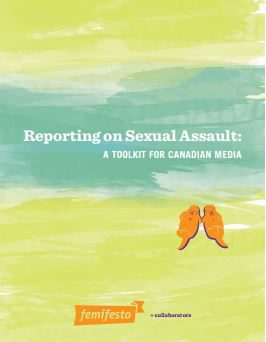 A grassroots organization has developed a toolkit to help Canadian journalists do a better job of reporting on sexual assault.

According to members of Femifesto, a Toronto-based feminist organization that aims to end rape culture, reporting about sexual assault often uses language and frameworks that make sexual assault seem like a normal or even inevitable part of life.

“We recognize that the media is really important in shaping conversations around sexual assault because they report on it so often,” said Shannon Giannitsopoulou, one of the toolkit’s creators. “We were interested in having a resource—a really easy-to-navigate resource—for people who are trying to cover sexual assault.”

The group’s toolkit—Reporting on Sexual Assault: A Toolkit for Canadian Media—was inspired by an American report on sexual assault for the media.

Its goal is to spark a conversation about how sexual assault is reported on in Canada and suggest how journalists can cover such stories without shaming or blaming the survivor.

The toolkit includes an explanation of rape culture, the legal definitions of sexual assault and consent in Canada, a checklist about the use of language, tips for interviewing survivors and examples of published reports about sexual assault, both good and bad. Femifesto created the toolkit as a living document; the first draft was released in December and they are now asking for feedback from journalists.

David Ball, an award-winning multimedia journalist at Tyee Solutions Society, a solutions-oriented news organization based in B.C, writes about sexual assault issues on a fairly regular basis. He’s read the toolkit and said the checklist is particularly helpful.

“It’s not uncommon for journalists to face the anger of the feminist community, but this checklist provides some tools that can actually change reporting in a very concrete way,” he said.

The toolkit doesn’t blame journalists for perpetuating rape culture. Instead, it acknowledges that journalists work under many constraints and provides some useful, concrete solutions to help them do better.

The checklist offers 14 practical suggestions such as: instead of using words like “victim,” the journalist should use the term “survivor” as it conveys agency and resilience. The toolkit also advises journalist not to downplay the crime by calling it “sexual activity” or a “sex act,” or to sensationalize it by referring to it as a “sex scandal,” and to be specific about the nature of the crime and the charges.

Ball said journalists should take this issue seriously. “I’ve heard more journalists this year talking about rape culture than I have before,” he said. “Not all accept that it exists, but I think there is an awareness that the way that we talk about sexual assault and sexual violence impacts how people perceive it to be acceptable or not.”

Feedback on the toolkit can be submitted until Aug. 30 and the final draft of the toolkit will be released on Nov. 25. About 100 people took the initial survey, and many quotes from those will be incorporated into the final draft.

“I think what we’ve realized is that sexual assault is really difficult for journalists to report on and that obviously they’re trying to navigate it as best they can,” said Sasha Elford, one of the group’s co-founders. “I think having a resource is really helpful because they might not know how to talk about sexual violence in a way that’s supportive.”