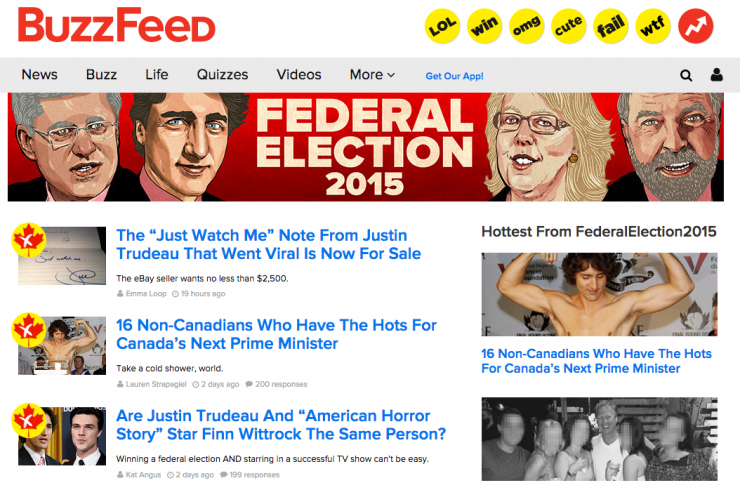 How BuzzFeed Canada covered the election, one gif at a time

Of all the coverage BuzzFeed Canada produced for the election, it was the Pokemon story that raised the ire of some of its readers.

“There were some people—journalists, usually people who have often come from a long-time newspaper background—who looked at it and said, ‘Well, this is a waste of the talent of a good political reporter,’” said Craig Silverman, editor of BuzzFeed Canada. The list, written by reporter Emma Loop, compared Canada’s political leaders to the Pokemon characters they most resembled.

During the election, BuzzFeed Canada posts not only compared candidates to whimsical Japanese pocket monsters, but also to seahorses and kittens—Loop would later contribute another piece explaining the Munk debate with Pokemon cards.

Was it funny? Yes. But it was also a perfect example of how BuzzFeed Canada is trying to reach an audience that may otherwise never read political news.

“We think that doing the high stuff and the low stuff and mixing the two and having some fun is important. I think it can cut through to people who maybe aren’t paying attention to the hard core, traditional political stuff,” said Silverman, who noted that many more people also really liked the Pokemon piece.

And at the bottom of that story, for instance, you can click through to another story by Loop about Canada’s aged fleet of fighter jets malfunctioning or injuring pilots. BuzzFeed also broke several important political stories during this campaign, mostly the work of politics editor Paul McLeod and Loop, including scoops like MP Rick Dykstra’s staff trying to pay off an underage girl so she’d deny that he drank with her.

That BuzzFeed Canada has contributed so much in the way of political reporting just two months after joining Canada’s media landscape is both good timing and good planning.

“We felt that a federal election is a really good opportunity for a new news organization,” Silverman said. “It’s very rare that you get an event where a good portion of the country’s attention is focused on one thing for a decent amount of time that has really huge implications across the country.” It was a chance to ensure that people knew BuzzFeed had landed north of the border.

However, BuzzFeed’s reporting also offers politics with a side of fun—an unusual combination in Canada. “We definitely felt in looking at [the media market] that there was space for a voice that at times could be playful and fun and satirical, but also there is always room for places that are able to break stories and do reporting,” Silverman said.

From day one, Silverman looked for staff who have a good sense of humour but are also great journalists.

McLeod was the Ottawa bureau chief for the Chronicle Herald before joining BuzzFeed. “Most of my friends back home never really read any of the stories that I wrote,” he said. “So I was hoping with BuzzFeed to get more people to care about this stuff.”

While McLeod and Loop do the bulk of the site’s political reporting, they were supported by two Toronto-based social news editors, Ishmael Daro and Lauren Strapagiel, and a team of staff writers who contribute more humorous, non-reported political content. Elamin Abdelmahmoud, the social media editor, also provides much of the voice of BuzzFeed Canada’s twitter feed.

okay okay i know we have a new pm and everything but LOOK AT THIS CHILL BABY FOR A SECOND #elxn42 pic.twitter.com/z9mdAIzCn8

The end result is a mix of short pieces that pick up on what is trending online and stories that are developed over time. Social media, according to Silverman, is treated as a serious place to find stories.

In practice, on a night like a debate night, Loop and McLeod would provide much of the serious reporting and live-tweeting while the rest of the team would look for funny moments to turn into gifs to go up on Twitter and later to be used in stories, while tweeting and promoting their other election content.

when your parents have visitors and you try to go to your room but your mom is like tom come say hi and you're like pic.twitter.com/gztus9sNse

That included a drinking game, now infamous to those who suffered hangovers the next day.

Because BuzzFeed isn’t a paper of record, there is less pressure for its journalists to write a news story about every single thing that happens and hit a word count. Instead, they can focus on what’s important, and, according to McLeod, what people want to read and share with their friends. “It’s just a totally different style of presenting the news most of the time,” he said.

Silverman wants to send the message that BuzzFeed Canada is here to do real reporting, while also having a playful approach. That other media follow up on stories BuzzFeed has broken  and go to McLeod and Loop to participate on political panels, exceeded his expectations of what the organization could accomplish.