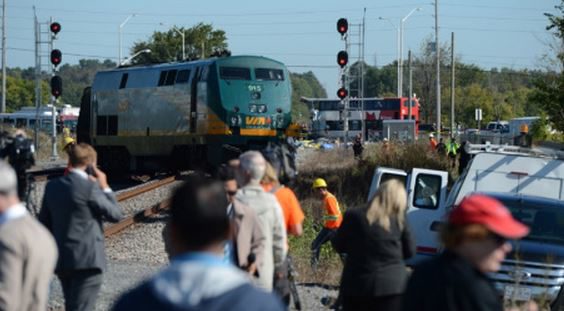 Jane Anido, managing director for CBC Ottawa, explains how the newsroom collaborated to tell the fast-developing story of Ottawa train crash and the challenges they encountered along the way.

By Jane Anido, managing director of CBC Ottawa, for the CBC Editor’s Blog

It was 8:55 in the newsroom on a bright, still September morning. Our assignment editor was getting ready for the daily 9 a.m. story meeting when she noticed a flashing BBM message from a friend. It read “Big crash bus train Woodroffe.” Her friend had been driving nearby, right after the bus and train crashed into each other.

Immediately, the assignment editor dispatched a camera operator to the crash site. One of our web writers called paramedics to confirm the story and learned there were multiple fatalities and injuries. A reporter, just arriving in the newsroom, was told to keep his jacket on, turn around and get out there as fast as he could.

So began our coverage of this tragic event.

We knew this was going to be a story of some magnitude. We immediately switched direction to focus the bulk of our resources – reporters, producers, writers, camera operators, and technical crews – on telling this one story. Our Parliamentary reporters and producers, who normally cover politics, jumped in also as a key part of our integrated coverage. This was an Ottawa story but it was also a national story. We wanted to serve our audiences, locally and across the country, the best way we could with a story that was quickly evolving and shifting.

A great volume of new information started to tumble in – from passengers on the bus and the train, from our first reporters on the scene, from the police, the bus company, the city, Via Rail, hospitals, and also from friends, neighbours and sometimes loved ones. (One of our executive producers guesses she received around 800 emails that first day.) What did we know? What were the facts? What information could we trust? What was our story thread going to be?

Our challenge was to make sense of all this in a clear and thoughtful way. We needed to ask all the right journalistic, ethical and moral questions that would help us decide what we were going to publish on the web, show and say on television, and air on radio.

For example, early on, bystanders and people who’d been travelling on the bus and the train tweeted photographs of the crash site. Some of the pictures were raw, close up and deeply disturbing with bodies scattered on the train tracks. It was an easy decision not to show the more graphic pictures to our audiences because we needed and wanted to respect those who’d died and their families. In some senses the crash scene had become something of a sacred place. We felt it would have been a tasteless and gratuitous act to publish these pictures when they added nothing of substance of the story. We did however, broadcast pictures taken from further away that showed the damage to the bus and the train and we also let people know there had been a number of deaths. At this early stage we didn’t know how many people had died.

By 11 a.m., we learned from a reliable source the full name of the bus driver. We’d been told he was among those who’d perished. We then double confirmed this, with two other reliable sources. Usually, when we’ve double confirmed other important information, we go ahead and broadcast it. However, in the sensitive case of a death, we almost always hold back. We want to be sure the police have contacted the family and conveyed the difficult news to them first. In this situation, we waited three and a half hours to publish Mr. Woodard’s name. This was when it was released by police.

Sometimes in a fast shifting story such as this one, the rush to be first with the news can sometimes overwhelm the need to be right. Early in the morning of day two, one of our reporters at the crash site announced on air that the number of dead had risen from six to seven. The news flew across our news service in a flash and it was broadcast and tweeted immediately. One of our web writers however, knew this was not the case. She had just checked with the hospitals, where the injured had been taken, and none of them was in critical condition. In some parts of CBC News, we corrected the misinformation within minutes through Twitter. However, it took longer to get that message across into other areas. This mistake stood as a valuable editorial reminder to everyone working on the story to check and double check new information before going live – especially in such a quickly shifting environment.

While our reporters and producers were gathering and reporting the story as it unfolded, our listeners, viewers and readers were feeding back to us through email, social media and phone calls. Many told us how shocked they were by the crash, some sent notes of condolence through our website to the families affected, and others raised questions about the safety of level crossings.

However, on the second day, one part of our coverage in particular caught the audience’s attention and they wrote to us in numbers. They focused on our decision to talk to the bus driver’s widow and then broadcast the full emotional interview on our morning radio program. In short, they told us that CBC had overstepped the bounds of decency by airing a conversation with Ms. Woodard the day after her husband had died.

While we appreciate and respect the many differing comments and opinions we invite from our audiences, we also feel it’s important to help people understand why and how we made some of the decisions we did. In the case of the interview with Ms. Woodard, here’s the story in question along with an explanation of what we weighed and balanced.

As the story continues to unfold this week, we will see the emotional roll-out of a number of funerals honouring those who’ve died. And while family, friends and the city continue to mourn their loss, our attention also turns to the questions we don’t have answers for. How safe was the bus? How safe was the level crossing? Who will be held accountable? What role may the bus driver have played? When will the Transport Safety Board’s investigation be complete? Do we need to change the rules and regulations governing level crossings in Ontario?

This article was originally published on the CBC Editor’s Blog and reprinted here with permission.