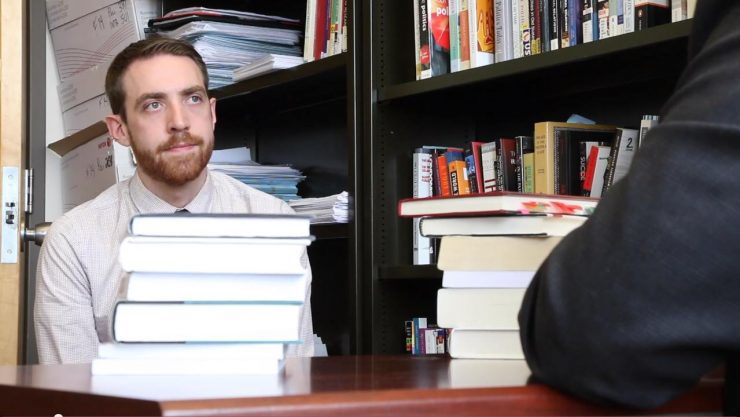 Recipient of the 2015 Michelle Lang Fellowship explains how his five-part Calgary Herald series came to be.

Dylan Robertson may have a regret or two when he looks back on his year-long investigation into homegrown terrorism in Canada for the Calgary Herald, but saying yes again and again to coffee invitations—from every “friend of a friend of so and so” who was available to him—was never one of them.

“It was a lot of work to break into this local subculture,” he said. But as the recipient of 2015 Michelle Lang fellowship—an award named in honour of the Calgary Herald journalist who was killed while reporting in Afghanistan in 2009—he’d set out with his series “Radical Reality” to understand how and why Canadians become radicalized. Earning the trust of Calgary’s local Muslim community meant getting to know everyone he could.

Each new person he met offered a new perspective. “You’d sit down and it would be like, ‘I was very close to this person who did something horrible,’” he said. Robertson’s willingness to listen, his to openness to their questions about how and why reporters do what they do, his knowledge of the Muslim faith and a grasp of basic Arabic all helped him gather his findings on the huge social issue.

His five-part investigation, which ran in print in late September and early October, revealed “cracks in Canada’s strategy to stop young Canadians from fighting abroad and attacking at home.” It also found that friends and families of people at risk of radicalization don’t know how to spot the signs, and that communities are struggling to work with police to help.

For Robertson, a journalist who graduated from the University of Toronto and Centennial College’s joint-journalism program in 2013, interned at This Magazine and The Gazette and spent more than a year as a radio room reporter at the Toronto Star, this was his most ambitious reporting assignment so far.

The spark: When Robertson initially applied for the fellowship, he’d submitted a proposal to investigate Aboriginal education issues. Then, in June 2014, Calgary’s chief of police announced that an estimated 30 Calgarians had gone abroad to join terror groups.  Robertson woke up at three o’clock one morning shortly after, wrote a brand new one-page proposal and submitted it before the application deadline: he wanted to investigate how and why Canadians become radicalized.

Lang fellows spend six months at Postmedia’s Parliamentary bureau at the Ottawa Citizen and six months in Calgary. In Robertson’s case, this meant that he was working in Ottawa when Michael Zehaf-Bibeau shot and killed Cpl. Nathan Cirillo at the War Memorial and then stormed the Parliament Buildings. “Luck,” isn’t the word to use, he says about being in the capital. When the topic he was investigating came to life in such a horrifying way, it gave his reporting a new urgency.

Throughout the year, Robertson was coached and supported by his editor, Chris Varcoe, politics editors at the Herald, and by Christina Spencer, the executive producer, politics, at the Citizen. In Calgary, where two of Michelle Lang’s best friends still work in the newsroom, he had a daily reminder of the importance of his work. “The mentorship was one of the most important things for me,” he said.

Leaving all of the writing for the month before the series ran was one of Robertson’s big regrets. “I would have drafted sooner,” he said with a laugh. The series featured one or two main stories over five days with several sidebars, anchored around five themes: an overview of the past year, a look at how Canadians are radicalized, how families struggle with the issue, a look at intervening before radicalization happens and how communities are trying to be resilient. These were far more words in one place than he had ever written before.

In hindsight, he said he should have written a couple of the pieces in the spring.

“There were one of two stories I thought I had in the bag,” he said. When Robertson sat down to write in August, however, he spotted problems. “There were key voices that just really weren’t there. And that’s a horrible feeling. You don’t want to have that feeling at a desk in August when everyone is on holiday.”

Looking back over his year, Robertson has a lot to feel proud about. But becoming accepted in a community where people are reluctant to talk with reporters, he said, is high on his list.

His starting point: “Not showing up with a notepad and looking scared,” he said. He listened a lot. He had many off-the-record conversations. He worked to explain to people the story he wanted to tell and why. “It was an exercise in trust,” he said.

His favourite story in the series, “Black cars and trouble questions,” is an example of how this kind of reporting paid off. Robertson met a young man at a political event who, in a private conversation later on, explained he was under surveillance. “This was the trickiest story to know what to do with,” Roberston said. Was he being investigated? If so, why? He had been talking about Iraq and he had known people involved with terror groups. “This person is showing a lot of signs,” he said. Still, he had yet to be charged with any crime.

Robertson sought to tell the story of why he was being watched and what this looks and feels like with the goal of being fair to both the man and the police. Since publication, Robertson understands it was a success: both the two young Muslim men quoted and the police agree that the piece did a good job of explaining how difficult this issue is to navigate. ”I’m proud because it’s a story that’s not out there,” he said.

While reporting on such a timely and important issue as homegrown terrorism is important, the pace of the issue itself over the last year meant that keeping up with all of its facets was difficult. Before his shifts on the city desk in Calgary—fellows also work as general assignment reporters a few days a week—he’d spend his early morning hours reading up on events as they developed. A tougher challenge for a reporter working on a series set to be published in months out in the distance: other media would run stories he’d be working on for his series. “I would get scooped,” he said with a laugh.

Robertson, who is now a full-time freelancer, wants to continue to report and research in this area. He’d like to report on the effects of C-51 as it comes into force, for instance, and on the hundreds of Canadians and their family members who are still affected by radicalization. He has two magazine ideas on the go about stories that have yet to be told.  “I’m a lot more interested in these broad questions,” he said.

[[{“fid”:”4823″,”view_mode”:”default”,”fields”:{“format”:”default”,”field_file_image_alt_text[und][0][value]”:””,”field_file_image_title_text[und][0][value]”:””},”type”:”media”,”link_text”:null,”attributes”:{“height”:1000,”width”:800,”style”:”width: 75px; height: 94px; float: left; margin-left: 5px; margin-right: 5px;”,”class”:”media-element file-default”}}]]Julie McCann is a professor of journalism at Algonquin College. Previously, she was a staff writer at National Post Business and Marketing magazines and a contributor to Chatelaine, Canadian Geographic, Applied Arts, The Gazette and The Ottawa Citizen. Photos by Angela Gzowski.