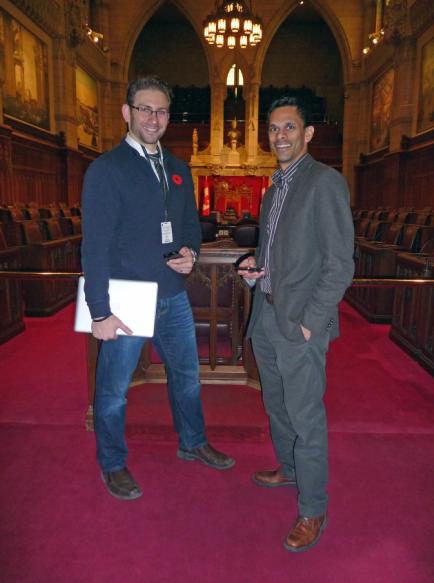 In this behind-the-scenes look, Postmedia News reporters Jordan Press and Mike De Souza explain how they tag-teamed to cover the rapidly evolving senators' suspension debate. They explain the technical and logistical problems they encountered along the way, and the techniques that served them well.

Regardless of what you think about the upper chamber and its bright red carpet, golden ceiling, wood-carved walls and murals depicting moments from Canadian history, the scandal involving senators Mike Duffy, Patrick Brazeau and Pamela Wallin—and the debate to suspend them without pay—has been a political drama unlike any other in the Senate’s history.

The only people able to see the debate happen in real-time were those sitting in the Senate chamber. As cameras were not allowed, press gallery reporters armed themselves with smartphones and laptops.

Here’s what we learned live-tweeting and live-blogging the Senate hearings:

1. Everything can be important

Much of the debate was procedural wrangling with senators referring to the convoluted rules of the Senate that are not easy to understand, even if you’re a senator. But that procedural wrangling is part of the debate. Without cameras, the debates became mostly inaccessible. Every word, action and argument was key for our followers. They wanted to know everyything—“dead air” was annoying and unnerving because they thought we were missing something crucial.

Colour from the chamber, such as body language or other behaviour, was helpful in illustrating and evaluating what was really going on. We added links to documents referenced during debate. We didn’t think that was a tall order, but doing that while listening to the content of the debate is tougher than it looked.

After chamber adjourns, Brazeau walks out with his files and a smile on his face. Sitting to resume at 8pm #cdnpoIi #SenCa

Unlike in the House of Commons, senators don’t speak in 30-second sound bites. They tend to speak in 300-second sound bites. Having one person keep tabs on the debate while the other person goes searching for value-added content was a helpful tactic. Press kept track of content with a little bit of colour; De Souza focused on everything else going on in the chamber, chiming in with debate details periodically. However, we feel this could have been better coordinated given deadlines and technical difficulties.

Autocorrect, premature tweeting before completing a message and spelling errors caused some problems.  An errant tweet can also distract followers from the debates going on. For example, when De Souza tried to catch a bit of colour during a speech by Sen. Claude Carignan, he noticed the government Senate leader waving a pen in his hand. The problem for De Souza was that his tweet missed a space between the words “pen is,” giving the illusion something else was floating in the air.

This was a complicated debate that at times left more than a few reporters and even senators trying to figure out whose suspension was being debated. When we weren’t too sure what was going on, we simply said three words: “I don’t know.” We followed that with “looking into this” and then tweeted out an answer when we had one. It made sure that while there was “dead air” online, our followers didn’t leave—they knew we were coming back with details. Other times, we just needed a mental break ourselves and did that through an irreverent tweet or observation, which also became a great way to draw more people into our feeds.

From a technical standpoint, here’s how we did it:

Tweeting was one part of an ambitious plan for our newsroom to cover the scandal from all angles, with videos, audio, alternative story formats and live blogs all working together. We have live-tweeted events before—we do it in the House of Commons regularly — but the Senate debates were different and we made a few mistakes along the way. It was, to say the least, a humbling and enlightening experience.