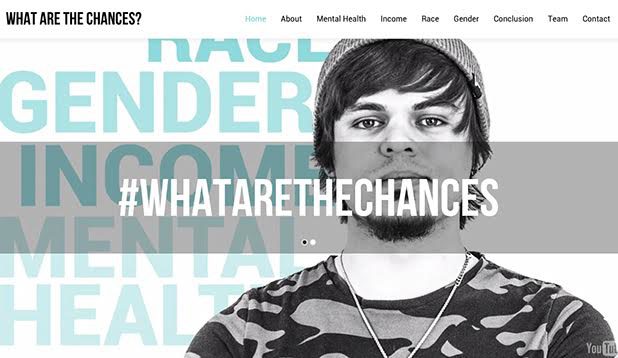 How Sheridan College got nominated for an Online Journalism Award

#WhatAreTheChances project among those recognized by the Online News Association this year.

What are the chances a group of second-year community college students could create a website that is internationally recognized? Apparently, pretty good.

The site won a national Emerge Media Award back in the spring and was a finalist for an Online Journalism Award, handed out at the Online News Association Conference in California in Sept. 2015.

We were the only Canadian school in the running. The three other finalists in our category come from two high-profile postgrad programs in the United States. For a small journalism program that developed a project with no funding, the nomination itself is a major accomplishment. And it’s not the first time our students have been in the spotlight.

Back in 2014, a project called Digitally Dependent Relationships, created in the same course, was nominated in two categories at the GEN international Data Journalism Awards, losing out in one to The New York Times. You can read more about that project here, and how flipping a classroom, using flexible teaching and learning strategies, and engaging students by making them decision-makers results in quality content.

Another big factor in the quality of content produced in this course, and its success in general, is that although Cheryl and I share much of the same skill set, my primary strength is editorial and Cheryl’s is web design. Where we might be able to supervise a project individually that could be really strong in one area and adequate in another, together we can teach students how to create a project that excels on all levels.

With any class, though, there are bumps along the way. We had to rejig timelines and due dates of assignments leading up to #WhatAreTheChances to make sure this particular group of students could manage the workload. And when the course was technically finished, the website still wasn’t ready to go public.

However, despite having received a final mark for the project and the course, with our encouragement and advisement, the students decided they’d fix the problems so the site could be published. Led by two superstars, Nick Kattis and Maria Ramage, who are now both working in the industry, they made the necessary changes that resulted in an incredibly insightful and visually engaging piece of work.

So, really, chance has nothing to do with it. Creativity, flexibility, ingenuity, and plain, old hard work are the keys to success–for this project, and a small program trying to make a big impact.

This story is republished with permission from Redefining Journalism’s blog.