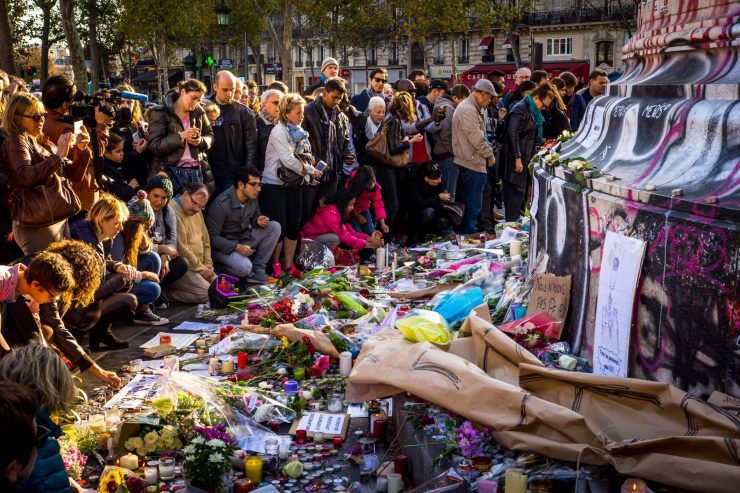 How three Canadian reporters told the stories of the Paris attacks

Rachel Browne, Carmen Chai and Cynthia Mulligan had their vacations and lives disrupted when terrorists attacked several locations in Paris on Nov. 13.

On Nov. 13, Carmen Chai, a Global News reporter on a sabbatical, was getting ready to meet friends. They were going to a restaurant not far from her apartment in Paris’s 3rd arrondissement—Le Petit Cambodge. Nestled in a quiet area in the French capital, the restaurant is in the same neighbourhood as the charming Canal St. Martin captured on celluloid in Amélie.

Just as she was getting ready to leave, her friend Suzan Yucel, a Dutch journalist Chai  had met while on an exchange in England as Ryerson University journalism student, came back to the apartment accompanied by a French friend, Agathe Moreaux. They were panicked—neither would sit down or eat, and both had tears in their eyes. They had witnessed gunfire near the restaurant. “We thought it was just an isolated shooting,” said Chai.

A few Metro stops away, Vice Canada reporter Rachel Browne was enjoying dinner with her partner. Before leaving Canada for her five-day vacation, Browne had tossed her press pass in her luggage—she didn’t normally bring it on personal trips, but she decided to pack it anyway.

When Browne got back to her hotel near the Louvre at about 11:30 p.m., her phone had been deluged with text messages and emails from her Vice colleagues, asking if she was all right. Outside, on Rue de Rivoli, one of Paris’s main arteries and tourist destinations, there was no indication that anything had happened. People still strolled the streets and sat in cafes, finishing their dinners.

Sound of sirens along Rue de Rivoli…some couples still out strolling like it's a normal Friday night.

Another country away, Cynthia Mulligan was exploring the streets of Florence. The City News reporter, well known to Torontonians for her coverage of city hall, was on vacation in Italy.

When she arrived back in her hotel room, she, along with the rest of the world, watched on the news as a terrorist attack gripped Paris. Among the targets was a soccer stadium where France and Germany’s national teams were in the midst of a match, a concert hall and several restaurants, including Le Petit Cambodge and nearby Le Carillon.

Mulligan knew what she had to do. “I instantly emailed my newsroom and said, ‘I want to go.’” The borders, however, were closed. She had to wait until the next day to find a flight to Paris.

It was different for Chai, whose apartment is so close to some of the shootings she only needed to listen to hear some of what was going on. “We live so close to the Bataclan,” she said. A famous concert hall, The Bataclan was the site of a hostage taking where 89 people were killed by three terrorists—two died using suicide bombs, and the other was killed by police.

“We could hear sirens all night,” Chai said. “And I don't know if they were gunshots or not, but you could hear what was going on outside.”

After connecting with her Global News editors, Chai filed a web story using quotes from her two friends and did radio interviews until close to 4 a.m.

The balance between a reporter’s instinct to follow the story and the necessity of staying safe was something all journalists in Paris grappled with. That night, if Browne had decided to walk towards the Bataclan, she would have done so not knowing where any potential gunmen were. In the end, she stayed close to where her hotel was. “I just tried to do the best I could with what I felt comfortable doing,” she said. “I wasn't going to put myself in any danger or go too far out of my comfort zone. At that point I was nervous for my safety.”

She walked the streets near her hotel for some time, but found that people still weren’t aware of what happened—she even had to update the hotel concierge about what was happening. “People seemed to be pretty oblivious to what was going on,” she said. It was later, as the police presence grew across the city and the hotels went into lockdown, that a tense mood took over the city.

The next morning, both Chai and Browne were finally able to walk freely through the neighbourhoods where the attacks took place. At the Place de la République, the sight of solidarity demonstrations and memorials for those killed in the earlier attack on Charlie Hebdo, Chai saw just a row of candles placed by mourners when she passed through the area at around 9 a.m.

But the scene on Rue Alibert and Rue Bichat, where Le Petit Cambodge and Le Carillon are located, betrayed the horrors that had erupted the previous evening. “You could see the stains on the ground,” said Chai. “You could see the bullet holes in the windows.”

Outside of Le Carillon today #ParisAttacks the aftermath of a terrible shooting.. pic.twitter.com/3kIl4EXqAD

Neither Chai, Browne or Mulligan had expected to be thrown into reporting, so all had to rely on resources they had at hand. Vice France didn’t have a videographer available, so Browne was paired with a cameraperson who had, she said, no journalism experience—he had only directed television advertisements. “He was with me for the rest of the week and I was just dragging him around all over the place,” Browne said.

On her flight to Paris on Nov. 14, Mulligan found a Parisian willing to talk to her. She recorded her story on the only piece of equipment she had and would have for the rest of her time in the city—her cell phone. “I could only shoot interviews in two-minute intervals,” Mulligan said, because the clips needed to be small enough to be emailed back to City News newsroom.

She often relied on the kindness of cafe and bistro owners who would let her recharge her phone while she drank cup after cup of cafe au lait. “As soon as I told them I was a journalist from Canada, they opened up their arms and they would do anything they could to help because they were happy we were there telling this story,” Mulligan said.

A moment of generosity in this great city. Owner of a bakery gifts me baguettes when she sees my press pass. pic.twitter.com/DPo5MODdY2

Reporting during a crisis is always made difficult by the rumours that abound both on the ground and on social media. Chai was careful not to tweet anything until she was sure it was true. “A big policy that I learned at Global was to make sure you are right before you say anything.”

When a series of fireworks set off near Place de la République were mistaken for explosions on Nov. 15, Mulligan found herself in the middle of a stampede. “All of a sudden people started screaming,” she said. “I've never heard screams like that in my life, and they just started running for their lives.” Instinct made her pull out her phone and start snapping photos and recording video.

Later that evening at Notre Dame Cathedral, Browne became aware of a shooting scare at St. Paul Metro station in Le Marais. “I was very careful not to tweet about breaking gunshots fired at such and such a neighbourhood,” she said.

It’s never easy to report in a high-stress situation, especially not one where you are far from home. But all three reporters found that people in Paris were willing—sometimes even eager—to tell their stories.

“People…had so much emotion,” said Mulligan. “They wanted to talk about it and they wanted the world to hear what they had to say.”

She was also surprised by the amount of media access French authorities allowed in the wake of the attacks. On Nov. 18, police raided Saint-Denis, a suburb of Paris, and killed two men allegedly connected with the attacks and arrested seven others. A woman also reportedly killed herself with a suicide vest. Mulligan, who arrived while the raid was in progress, was able to run alongside police as they carried out the raid.

Latest video of #Paris standoff from @CityNews reporter @CityCynthia. @BTtoronto will speak with her live pic.twitter.com/EymLMDrZSl

“They didn't stop us; they didn't keep us away. They were so focused on what they were doing that it was sort of like, if you want to come along for the ride, just duck if you need to,” Mulligan said.

During an event of this scope, the more reporters available, the fuller the story that can be told. Chai, who has lived in Paris twice, was able to tap into expatriate networks to find Canadians in the city affected by the attacks. Mulligan looked for tourists and even found a bar, The Great Canadian Pub, while she sought Canadians for on-the-ground stories. Browne’s reporting supported the multi-national team that covered the attacks for Vice, and she sent daily reports back to Canada for Daily Vice.

Mulligan departed Paris on Nov. 19; Browne on Nov. 20, a full five days after her vacation was supposed to end.

“I never regretted going,” said Mulligan. “Not even for a moment.” She said that during her reporting in Paris, and since, she received messages of support from Torontonians who appreciated seeing a familiar face on the scene.

Chai’s sabbatical continues until the New Year. She’s watched as flowers and pictures buried the stairs leading up to the statue in the centre of Place de la République. The same has happened in front of Le Petit Cambodge and Le Carillon.

She has had a unique vantage point watching Paris return to some semblance of normalcy. “I don't want to say that it is safe,” Chai said. “But we are going about our regular lives; going on the metro every day; sitting in cafes outside still. Life has resumed.

But I'm not sure what it looks like from the outside.”