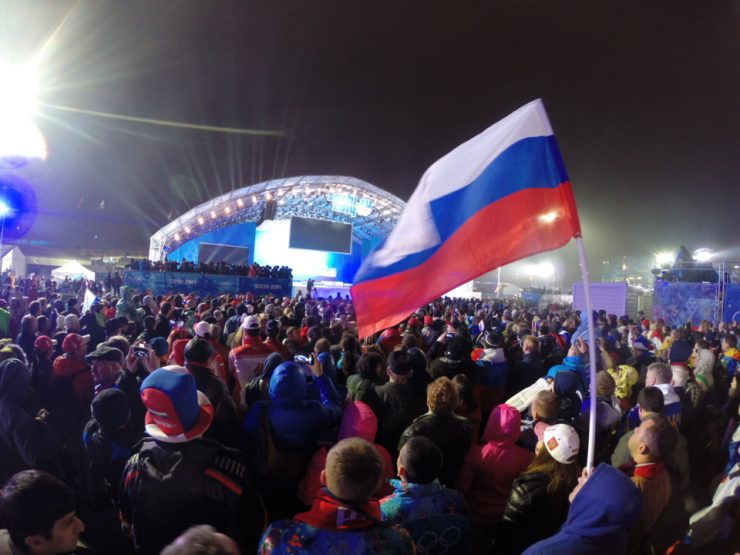 How to cover the logistical beast that is the Olympics

What was it like to be part of the CBC machine covering the Olympics? David Common reflects on reporting from the ground in Sochi and the logistical beast that is the Winter Games.

The Olympics is a beast. Next to war and mass refugee exodus, it is perhaps the largest undertaking of human logistics in modern times. The task is huge. Create a city to impress, host the top athletes in world-class spectacles and broadcast everything around the world in dozens of languages.

It is also the opposite of what I’ve spent most of my career doing. I thrive on last-minute assignments, where planning is done on the hood of a car just before meandering down a dusty road. I have always worked in small groups, sometimes alone. As a result, decisions can be made quickly and without much concern for reverberating repercussions. The Olympics can’t be like that—and that was a huge challenge.

First, there’s learning all about these athletes and their crazy sports (like skeleton: who got drunk on a mountain and dreamed that up?!). Then there’s understanding the context surrounding the Games: an Olympics neighbouring a conflict zone, where the rhetoric all but guaranteed a terror attack, where ordinary Russians had been displaced from their homes while others were brought in for the mammoth construction projects and sometimes weren’t paid. The rights of gays emerged early as an issue, alongside human rights, and then the weather—how could such a temperate climate host something with the word “winter” in the title?

But never mind all that. Think instead about the sheer volume of television signals. Cameras mounted on drones tracking skiers’ up-in-the-air descents, and cable-mounted lenses that moved across the vast Olympic Park itself. The Olympics are built not for the spectator, but for the television viewer. Networks around the world pay substantially for the rights to broadcast these events and in return they can access venues and video of amazing feats.

You heard a lot about hotels…the ones that weren’t quite finished. Admittedly, my ceiling wasn’t zipped on when I arrived, and, yes, I have that right. The ceiling was fabric made taut by a zipper that ran from the top of the walls. The tiling was, let’s say, incomplete. But on the whole, it was fine. And it must be measured by a Russian standard, which is not at the same level as we might expect throughout North America.

Food was often eaten on the fly. It was not unusual to work 15 or more hours in a day. Outside the park, eating could be a real treat. But inside, not quite as much. For many, McDonald’s was the healthy option because it had salads, yogurt and fruit. Otherwise, hot dogs, baked potatoes, beet salad and Russian pancakes were the mainstay.

I flew over to Sochi with Craig McMorris, CBC’s snowboard analyst and brother to the sport’s emerging superstar, Mark McMorris. Craig was worried. His brother had broken a rib in a hard crash at the X-Games only weeks earlier. It didn’t bode well. And on his first Olympic competitive run, Mark had another crash.

I was with Mark’s parents, who had just arrived from Saskatchewan, during that first run. When he went down, the excitement on their faces was flushed away, as they registered what they knew would be their son’s disappointment.

And yet, Mark’s stellar subsequent runs would earn him a bronze medal. He was ecstatic in the whirlwind of press interviews that follow a medal win. And though he was clearly the centre of attention, and has a profitable career ahead of him, just chatting with Mark made me realize how grounded he is.

Just days before the closing ceremonies, as journalists and much of the world were taken in by the notion that Russia had “pulled it off,” dark clouds surrounded Ukraine’s capital. Vladimir Putin was in Sochi, smiling as much as he does, confident that Russia had demonstrated it could host a world class event, free of security or logistical nightmares. But the goodwill built up would soon evaporate.

Snipers opened fire in Kiev’s Maidan Square. Russia and the West have long tussled over influencing Ukraine and this was a climax. In just two weeks, Russia would go from showing off to seeming-aggressor. Just 500 kilometres down the Black Sea coast from Sochi, Ukraine’s Russian-speaking region, Crimea, would become the new fault line.

The attention of the world has not shifted far on the globe, but the story is vastly different.

David Common is the host of CBC’s World Report and a correspondent with CBC News. He’s reported from more than 50 countries, from the beaches of the Seychelles Islands to eight separate trips to Afghanistan. He helped cover the 2003 invasion of Iraq, toured the Arctic on a Canadian icebreaker, covered the devastating earthquake in Haiti, the tsunami in Japan and elections in the US. Common has received several awards, was nominated for a Gemini twice, winning once in the Best Reportage category. He’s also one of the CBC’s multi-skilled journalists, able to shoot and edit his own stories as needed.