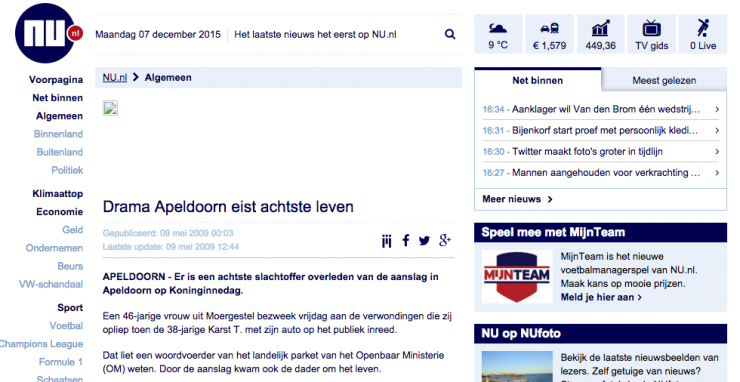 In some European countries, not naming those accused of a crime is the norm

In the spring of 2009, the Dutch royal family was riding in an open-air caravan to celebrate Queen Beatrix’s birthday when news cameras filming the celebration suddenly caught Karst Tates smashing his car through police barriers and hitting spectators as he drove wildly toward the parade.

His car crashed into a monument, but before losing consciousness, Tates told police he had intended to assassinate the queen. He killed seven bystanders and injured 10 more. Tates died the next day of head injuries. News of the tragedy travelled the world.

Just weeks later, one of the authors of this article, Maggie Jones Patterson, stopped at the Hague headquarters of the Dutch press agency, Algemeen Nederland Persbureau, with a group of American journalism students touring Europe.

“We did not include Karst Tates’ name in the stories we sent out,” ANP’s news manager and editor Liesbeth Buitink told the group as she explained coverage of the incident. While the full name was in a second computer file that was attached to the story document, but had to be opened separately, most Dutch media chose to refer to the would-be assassin as Karst T. or by initials only. Some chose not to name him at all.

The surprised Americans asked Buitink to explain. Her answers were consistent with those from journalists in the Netherlands and Sweden as part of a research project launched by Buitink’s account. In the Netherlands, Sweden and many other countries in northern and central Europe, the default in crime coverage is not to name persons accused, and in some cases, convicted of crimes.

In most cases, this journalistic practice is an ethical choice, not one required by law. It’s a stark contrast to how we in the United States and Canada cover crime, and it led us to explore reporters’ approaches and motivations, as well as the effects of differing crime coverage practices in a variety of similar democracies.

To date, we’ve interviewed 170 news professionals in Canada, the United States, the Netherlands, Sweden, England, Ireland, Portugal, Spain and Italy. In each, journalistic habits reflect differing assumptions about the presumption of innocence, the public’s right to know and the execution of justice.

In each country, we read a sample of the major crimes stories, consulted the prevailing ethics codes and accountability practices and conducted in-depth interviews with journalists, editors and media academics.

Journalists in the Netherlands and Sweden cited three major reasons for their practice of protecting criminals from the public spotlight:

As Morgan Oloffson, head of news at Swedish Public Television, put it, “We have to weigh that pain we inflict to the person and their family against the benefits society can render from naming that person… and [it’s] especially hard if the suspect has school age children.

Innocent until proven guilty and rehabilitation

Remarks by Martin Jonsson, managing editor for Sweden’s Svenska Dagbladet, were echoed by virtually all of our interview subjects. “If you publish the name and the photo and he is found innocent, the damage may have been greater. The person’s name may be remembered, and people think where there is smoke, there is fire,” he said. But their concern extends to a faith in redemption. “When a criminal has done time, he or she has the right to be reintegrated into society” without having to hurdle a damaged reputation, Daphne Koene of the Dutch Press Council said.

Trust in the state and the role of journalism

Surveys show that the Swedes and the Dutch trust their governments and their criminal justice system. Reporters do not describe themselves as watchdogs, as they do in North America. While North Americans treasure their individuality,

Most Dutch and Swedish journalists were as surprised to hear about North America’s “tell-all” style of crime reporting as we were to hear about their practices.

The comparison of one country’s practices with another is unlikely to change many minds, but it can persuade reporters and editors to lift journalistic practice out of rote custom and look more thoughtfully at what they do.

[[{“fid”:”5129″,”view_mode”:”default”,”fields”:{“format”:”default”,”field_file_image_alt_text[und][0][value]”:””,”field_file_image_title_text[und][0][value]”:””},”type”:”media”,”link_text”:null,”attributes”:{“height”:257,”width”:240,”style”:”width: 75px; height: 80px; margin-left: 5px; margin-right: 5px; float: left;”,”class”:”media-element file-default”}}]]Maggie Jones Patterson is a professor of journalism at Duquesne University, Pittsburgh, and a former reporter for the Pittsburgh Press.  Her academic interests are in media ethics and media and gender issues.  She has co-authored Art Rooney: A Sporting Life (University of Nebraska Press, 2010); and Behind the Lines: Case Studies in Investigative Reporting; and Birth or Abortion? Private Struggles in a Political World. [[{“fid”:”5128″,”view_mode”:”default”,”fields”:{“format”:”default”,”field_file_image_alt_text[und][0][value]”:””,”field_file_image_title_text[und][0][value]”:””},”type”:”media”,”link_text”:null,”attributes”:{“height”:157,”width”:150,”style”:”width: 75px; height: 79px; margin-left: 5px; margin-right: 5px; float: left;”,”class”:”media-element file-default”}}]]Romayne Smith Fullerton is an associate professor in the Faculty of Information and Media Studies at the University of Western Ontario and the ethics editor for J-Source. She is an interdisciplinary scholar whose research interests and publication list broadly encompass gender, minority issues, and journalism ethics. She is the co-editor of Covering Canadian Crime: What Journalists Should Know and the Public Should Question, forthcoming with the University of Toronto Press in the spring of 2016.

Professors Patterson and Fullerton are working on a book-length study that compares crime coverage in a selection of western European democracies.