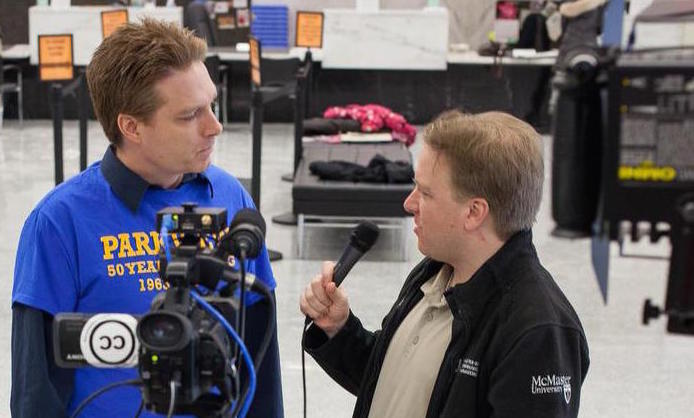 Joey Coleman has decided to resurrect his independent news website, the Public Record, after shutting this summer it down because of mounting legal costs.

Touting himself for many years as Canada’s only crowd-funded journalist, Coleman provided intensive daily coverage of city hall meetings and issues in Hamilton, Ont., first at JoeyColeman.ca, which he started in 2004 and began news reporting on in 2012, and then at the Public Record in 2014.

With the financial backing of funders from several different crowd-funding campaigns, he live-streamed almost all of the meetings of approximately 160 committees and subcommittees, and of course, Hamilton city council. As councillors debated hot topic issues like bringing a casino to the city and whether to build light rail transit, the service Coleman provided was welcomed by many locals who could not attend meetings in person.

Coleman was no cub reporter when he decided to go independent. He had already worked for The Globe and Mail and Maclean’s and was well known in Hamilton. “I had a very high community profile,” Coleman said. “And even with that profile and 9,000 Twitter followers, I've only got 1,000 people to give me money.”

Coleman’s plans began to unravel in 2014 when he said he was assaulted by Councillor Lloyd Ferguson in the foyer of council chambers after a committee meeting. Ferguson apologized the next day, and the Hamilton integrity commissioner found that Ferguson had violated the city’s code of conduct, but police never laid charges.

But the event set in motion a legal saga that endures to this day. Coleman, when he spoke to J-Source, said he was still not at liberty to discuss some details of the case he is involved in—an appeal to release the video of the alleged assault.

The costs Coleman was incurring made it hard for him to keep the Public Record financially sustainable. As well, he said his city hall press credentials were revoked and the Internet and audio lines he uses to stream council meetings were removed. As a result, he said he can no longer enter the media area at city council and will have to use his own power packs to continue streaming meetings.

News reports about Coleman’s court case—which included an allegation from Ferguson that Coleman was eavesdropping—made it harder for him to do his work when he was making the news instead of writing it. That’s why, in August, he announced he was ceasing publication of the Public Record.

He said this is one of the unique challenges faced by independent journalists.

“I doubt very much that if I was in an organization with the legal staff and support of a traditional publication that this would have ever occurred in the first place,” Coleman said.

In the early days, Coleman said he was often the lone reporter at many city committee meetings, which has only changed in the past few years. He suspects that the dearth of reporters is not specific to Hamilton—instead it is a symptom of shrinking newsroom budgets.

Coleman’s work was noticed—former Councillor Brad Clark recently told Hamilton Seen that Coleman’s brand of reporting was novel, at least for city council. “It was special in Hamilton; it was special and unique at city hall. Where [Coleman] irritated people is he brought a camera into public meetings, and I say it with a smirk because I find it so comical that civil servants or elected officials would be offended by someone wanting to tape a public meeting.”

Wall’s comments were one of the reasons Coleman decided, just a month after shutting down the Public Record, to start the process to get it back up and running by January, despite his on-going legal costs. Part of his new crowd-funding goal will be to raise enough money to keep a lawyer on retainer. In addition to streaming meetings, he will also start creating highlight clips of important council and committee items.

This time, Coleman said will be more forthcoming about the challenges he faces trying to his job. “I’m just going to be very public with any problems that I have with the council—it’s just that simple.”

Correction: An earlier version of this story said Coleman had started JoeyColeman.ca in 2013. We apologize for the error.