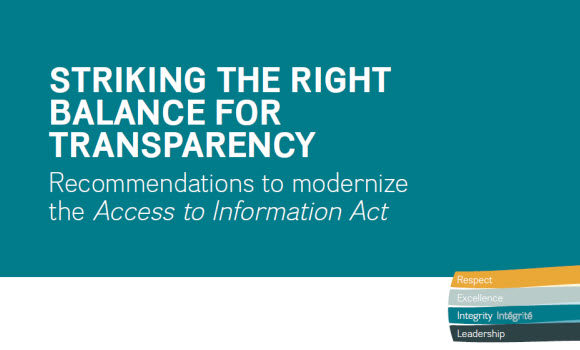 Information Commissioner calls for changes to access to information law

Federal Information Commissioner Suzanne Legault has tabled a report in Parliament recommending changes to Canada’s Access to Information laws. The recommendations include extending the Act to cover the Prime Minister’s Office and other government-related institutions, replacing exclusions from the Act with more narrowly defined exemptions and giving the commissioner power to order the release of information.

Legault’s recommendations would also give government offices the right to refuse “frivolous and vexatious” requests, and would mandate a review of the access to information legislation every five years.

A group of civil society organizations hailed the report, entitled Striking the Right Balance for Transparency: Recommendations to modernize the Access to Information Act, as a useful roadmap for fixing a system “in crisis.”

In a statement, the commissioner’s office said that the recommendations are “aimed at creating a culture of openness by extending coverage of the Act to all branches of government, setting tighter timelines in the processing requests, maximizing disclosure by ensuring that exemptions protect only what is strictly necessary, and strengthening the oversight of the access to information regime.”

Legault recommends extending the legislation to cover institutions it does not cover now, specifically including the Prime Minister’s Office, the offices of cabinet ministers, institutions that support Parliament and those that provide administrative support to the courts. She also recommends establishing criteria to determine what other institutions should be covered.

Recommendations on the right-of-access include extending that right to non-residents and requiring government offices to document and report the unauthorized loss or destruction of records.

Legault would also allow institutions to refuse to respond to “frivolous and vexatious” requests—but would allow such refusals to be appealed to the information commissioner.

The report recommends limiting extensions to “what is strictly necessary, based on a rigorous, logical and supportable calculation,” and to a maximum of 60 days. Any extensions longer than 60 days would require the commissioner’s permission.

The recommendations also include removing all the existing exclusions in the act and replacing them with exemptions. This would include the controversial exclusion of “cabinet confidences,” which the commissioner says has been interpreted too broadly. An exemption would remain for information that would “reveal the substance of deliberations of Cabinet.” Legault also proposes a public interest override applicable to all exemptions.

Recommendations also include a broader range of sanctions for non-compliance with the Act, including administrative monetary penalties and disciplinary measures and criminal sanctions.

The report also recommends amending the Act to reflect the government’s open government initiatives and commitment to a culture of openness by default, including additional requirements for proactive disclosure, the obligation to publish information of public interest and the requirement to adopt publication schemes.

Finally, it recommends that Parliament review the legislation every five years.

“The Report is a robust assessment of the current system and provides a useful roadmap for starting a broad public consultation on how to update the Act to better serve Canadians and streamline processes for public authorities,” the 11 organizations said in a joint statement.