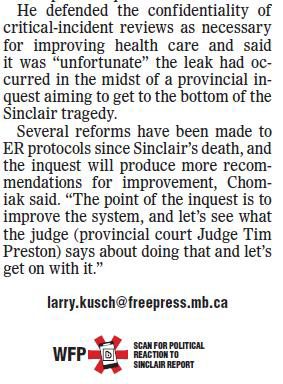 Readers can scan the newspaper with the app Blippar to link to digital content such as videos and photo slideshows on their mobile devices.

The Winnipeg Free Press launched an augmented reality app earlier this month to bring multimedia to the print edition. Readers can scan the newspaper with the free app Blippar to link to digital content such as videos and photo slideshows—and even the answers to crossword puzzles—on their mobile devices.

J-Source: This is quite innovative. Tell us more about it and how it got started.

Paul Samyn: This is the new reality of the Winnipeg Free Press. It’s so much deeper than a cool app, and as we said on the wraparound on the day we launched it, we’re boldly going where no newspaper has gone before. Glacier Media does it for some advertising and Ikea has it in its catalogues, but there is no major Canadian daily that is doing this. I saw the potential in it when we saw a presentation about augmented reality at the Newspapers Canada conference, and it took us just under six months to get it going.

J-Source: Will every story have this augmented reality feature?

PS: The additional content is not on every story, but every section of the paper does include stories with the feature. We’re linking to a movie trailer, a scrum video with a politician, an interactive for a special series right there. I especially like because it reinvents this image of the newspaper as a dinosaur to a place where you can get your news in a very cool way. And our staff has been quite excited about it too. It took a lot of explaining at first, because no one has really done anything like this before. But I think more people are onboard now.

J-Source: What does this venture cost?

The app is free. And we added one production staff at night and got a few more iPads to test that it was working properly. But it doesn’t really cost us anything extra as we were already creating this extra content. Now it just makes it easier for our print readers to access it.

J-Source: Why go with Blippar?

PS: We looked at a couple of different vendors, but went with this British-based company because they had late-night technical support. Most of the augmented reality features are being added late in the night—as late as 2 a.m.—so we needed to have the tech support after hours.

J-Source: And what has the audience reaction been like? Will you be tracking the popularity of this augmented reality feature?

PS: It’s been very positive. I’ve got teenage kids and everything is point and click for them. Our hope has been that the younger generation will start seeing newspapers in that sexier light. We will be tracking all sorts of data from when people blip—from how long they stay on a feature—to which one gets the most clicks, to which part of Winnipeg the reader is geographically in.

J-Source: Any plans to monetize this new feature?

PS: There’s definitely the potential for a revenue stream here. My focus is editorial, but I think once we build an audience, we can go to advertisers and say this is some of the more interactive ways in which we can feature your ads in the newspaper. For a car dealership, we can add a promotional video that showcases the new car right there. Or perhaps for the Winnipeg Folk Festival: you can listen to some of the lineup and then connect directly to the box office and buy your tickets.

This interview has been edited and condensed.