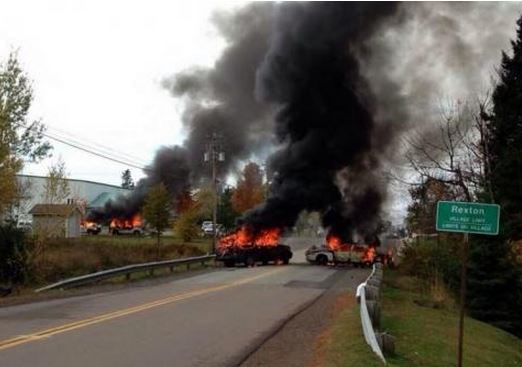 Is law enforcement turning journalists into agents of state surveillance?

Should journalists be worried about police tactics that force them to gather information on innocent citizens, violating their privacy and infringing on the right of individuals to freedom of expression? J-Source Law Editor Thomas Rose explores whether so-called production orders are doing just that.

They’re called "production orders" and they signal what may be a growing trend among law enforcement agencies to co-opt journalists into becoming agents of state surveillance.

Production orders occur when a judge agrees to a police request to compel media outlets to surrender material obtained by journalists in the course of preparing their news reports.

The latest production order was issued last week in Moncton when a judge granted a request by the RCMP to force five national and local media outlets to turn over all videotapes and photographs taken during a confrontation last fall between police and citizens protesting the possible development of large-scale shale-gas production, or fracking, in Rexton, N.B.

Two years ago, a B.C. court issued a similar production order compelling six media outlets in that province to turn over to police all unpublished images taken while covering a riot that occurred after the Vancouver Canucks lost to the Boston Bruins in game seven of the Stanley Cup final.

In both cases, police argued the images were necessary to help them identify individuals suspected of carrying out criminal acts. In both cases, journalists argued being forced to assist police in their investigations undermines the credibility of reporters to act as neutral observers of events. It also potentially compels journalists to violate the right of innocent citizens to freely express themselves, especially if police keep lists of all individuals who attend a demonstration, regardless of whether they engaged in criminal activity.

The ability to operate independently, fundamental to the practice of journalism in a liberal democracy, becomes imperiled if citizens perceive the media operating as agents of the state. Production orders risk undermining journalism in just this way.

According to Nancy Rubin a lawyer for Brunswick News, one of the media outlets named in last week’s production order, "if people perceive that reporters are working on behalf of the police, or are likely to co-operate with police by supplying such material routinely,” they may be reluctant to grant journalists the kind of front-line access they need to report on events fairly and accurately. There is even the possibility, argued Rubin, that production orders could turn journalists into targets.

Yet production orders are fast becoming a standard feature of police procedure in an era of heightened security concerns, according to recent research. A study published in the Minnesota Law Review, for example, shows that in the U.S., production orders in 2007 were double what they had been in the previous six years.

Of particular concern to broadcast journalists, the study also found that most production orders were aimed at broadcast news outlets, with almost 89 per cent of all television news operations receiving at least one such order in the preceding year.

Researchers discovered that the average number of production orders per television news operation was 10, but the average number for newspapers was fewer than one. "Prosecutors are lazy," suggested one respondent. "They would rather subpoena a TV station's video of a car chase for example, than have to issue numerous subpoenas to obtain video captured by a police vehicle."

Production orders create the possibility that everything a reporter’s camera captures, not just what is published or broadcast, will routinely be given to authorities should they request it.

Alarm over this kind of state excess was at the heart of a decision last December by an Israeli court that overturned a production order demanding the country’s largest news organization, Channel 2 News, surrender all images of protests that occurred throughout Israel in the wake of a controversial government decision to conduct a mass expulsion of an Arab community in the Negev. Lawyers for Channel 2 News argued the production order had the effect of “turning the news company into a sub-contractor of the police.”

It may be tempting to dismiss production orders as a necessary infringement on an independent press; the cost of maintaining public security. On the other hand, left unchecked, production orders can also be seen as a startling invasion of privacy; yet another instance of increased mass surveillance of the public by the state.