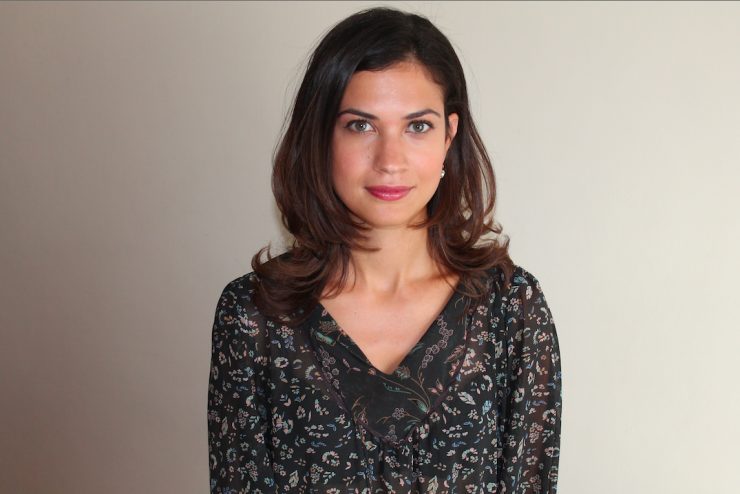 As the Toronto Star’s new work and wealth reporter, Sara Mojtehedzadeh is one of a dwindling number of journalists dedicated to covering labour issues full-time.

Last fall, London-based BBC reporter Sara Mojtehedzadeh was on her way to South Africa to cover the Oscar Pistorius trial, and then to Kenya, to report on the anniversary of the Westgate Mall attacks in Nairobi. The trip came while Mojtehedzadeh, who is Canadian, was in the midst of interviewing for a job at the Toronto Star. She did her third and final interview from Heathrow International Airport.

She found out she got the job as the Star’s new work and wealth reporter while in Johannesburg. One month later, she was reporting in Toronto; her first story was on daycare costs in the GTA, the highest in Canada according to the Canadian Centre for Policy Alternatives.

“I landed [in Toronto] on a Friday and started on Monday, so I had very little time to get myself settled,” said Mojtehedzadeh, sitting in the Star’s cafeteria. “But it was good to just jump straight into it and get going. “

Mojtehedzadeh’s year-long appointment is the result of a partnership between the Star and the Atkinson Foundation, the philanthropic organization named for the newspaper’s founding publisher, Joseph Atkinson. The motivation for establishing the work and wealth beat came from a desire to increase civic conversation around decent work and wages “from the corners of Queen’s Park to coffee shops to campuses,” said foundation executive director Colette Murphy.

The foundation is funding the position, but the Star handled the hiring process.

Mojtehedzadeh’s appointment comes at a time of growing concern about the loss of stable, well-paying jobs and growing income inequality in Toronto and beyond. In February, she wrote about the findings of a United Way report that named Toronto the country’s inequality capital, with the income gap between the rich and poor rising by 31 per cent between 1980 and 2005.

“The most appealing thing [about the job] was the social justice angle and the opportunity to do it at home,” said Mojtehedzadeh. The 28 year old earned her undergraduate degree in conflict and peace studies at the University of Toronto before completing her master’s in comparative politics at the London School of Economics. She pursued these degrees to get an academic background for the stories she hoped to cover.

Since October, Mojtehedzadeh has written about Ontario’s low rate of income growth and rising rates of underemployment, disappearing health benefits and the efforts of labour activists fighting for better wages. In an early article, she profiled a Toronto resident named Richard Wang, who was carving out a living for himself and his son by working as many temporary jobs as possible. Wang’s story illustrated the problem of intergenerational poverty and precarious work, a topic Mojtehedzadeh has revisited since.

The profile attracted the attention of one reader in a position to help. In a follow-up article two months later, Mojtehedzadeh reported that Wang had a job sorting recyclables, his first full-time position in 10 years since arriving in Canada.

Recently, labour stories have dominated the news with the closing of major retail chains, plummeting oil prices jeopardizing employment and labour strikes not only at two of Canada’s largest universities, but also by workers at the Crown can factory in northern Toronto. Yet, the traditional labour beat has been disappearing in Canada. “The growing public consciousness around income inequality has spurred more discussion about topics that traditionally would have been covered by labour reporters,” H.G. Watson wrote in an article for rabble.ca last year (which was republished on J-Source).

Mojtehedzadeh agrees. “Work is just as relevant as it was 50 years ago, but I think that the nature of work has changed so dramatically,” she said. “Labour issues are definitely fundamental to the type of stuff that I’m talking about, but what we’re really trying to get at is the issue of precarious work and what we can do to alleviate some of the problems associated with that.”

Her solution-focused approach to journalism is one that the Star’s city editor, Irene Gentle, commends, and one of many attributes that make Mojtehedzadeh so good at her job.

“She had some terrific ideas already formed by the time she came in,” said Gentle. “She’d clearly be doing some thinking.”

Journalism, Mojtehedzadeh said, was a “happy accident.” After her master’s, she was offered an internship and later an entry-level position at a London station, Sky News.

She was given a lot of responsibility quickly, but she wanted to do more reporting, “ideally in print.” Encouraged by a friend, Mojtehedzadeh applied and won a coveted fellowship from the Aga Khan Foundation Canada to report in Kenya at the Daily Nation newspaper. After that she freelanced from London for Sky News and Al Jazeera before landing position in radio at BBC on the African news desk.

After spending six years abroad, Mojtehedzadeh came home to a growing problem of income inequality in Toronto she hadn’t noticed as a student. The Star’s extensive advance coverage on the United Way’s report on the issue was a major coup for the paper and for Mojtehedzadeh, said beats editor Scott Colby, who has worked with her since she started at the newspaper.

“I get the sense the she genuinely is interested in this type of reporting and it shows; she’s quite passionate about it,” he said, noting that her situation at the Star is also unique: “She’s in a precarious work position, writing about precarious work.”

Mojtehedzadeh doesn’t know what will happen to her beat when her contract ends in October but said she knows what she’d like to achieve with her time at the Star.

“I hope that what this beat can do is de-stigmatize talking about workplace and income issues,” she said. “There’s no shame in not being able to find a job or being stuck in precarious work. It’s not the individual’s fault; it’s the system we’ve set up.”