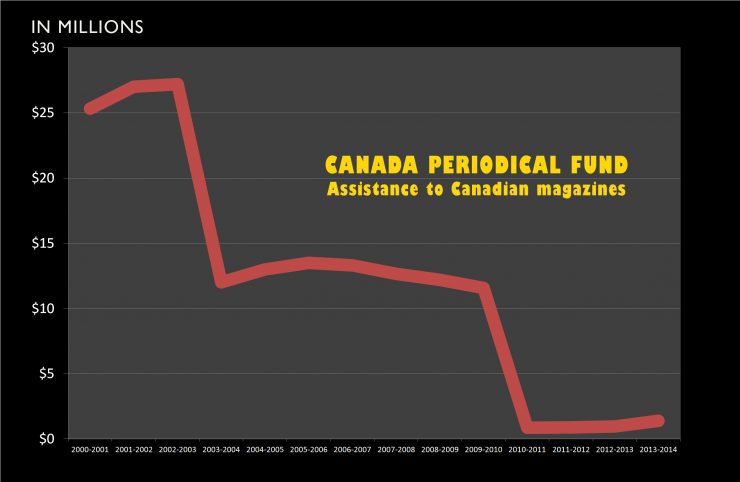 Magazine funding in a decimated state

On Sept. 21, after a long, uncomfortable silence, magazine editors across western Canada received official notice that there would be no Western Magazine Awards in 2015.

A memo from the Western Magazine Awards Foundation pointed to declining ticket sales amid tightening industry budgets; however, the “most critical challenge” was cancellation of the foundation’s federal funding under the Canada Periodical Fund.

“These federal grants traditionally covered the vast majority of the WMAF’s operating expenses, including the position of executive director, which is now vacant,” the foundation wrote.

“In keeping hopes alive, we delayed this announcement as long as possible,” the memo concluded.

Behind the scenes, both the national and western awards foundations had spent the past year scrambling to recover from the loss, abruptly announced in January 2014.

“It was completely out of the blue,” said Barbara Gould, managing director of the National Magazine Awards Foundation. Word of policy changes that excluded recognition programs came in the form of an email from the Department of Canadian Heritage, with the lead-up to awards season already well underway.

The national foundation had the advantage of corporate sponsors and ticket sales to support core operations and the National Magazine Awards evening night.  The foundation stretched its operational budget to cover scaled-back versions of grant-funded programming,, such as the foundation’s internship program and social media initiative, and cancelled a plan to promote award-winners in mass media.

Meanwhile out west—removed from the world of Toronto’s corporate head offices and higher-budget magazines—the WMAF’s efforts to diversify its activities and funding were “too little, too late,” according to WMAF acting president Jennifer Giesbrecht.

Unlike the national group, lack of notice wasn’t the issue for the western awards, as the group hadn’t yet completed their submission and therefore had an advance heads-up that policy changes were underway. But the WMAF’s activities orbited closely around the awards night, requiring a major organizational revamp to adjust.

Pressed for time and lacking staff, the board decided to throw in the towel on the 2015 season, concentrating their efforts on a full review of how to revitalize the WMAF’s program and infrastructure. .

“We were (already) in the process of making some exciting changes…but the government beat us to the punch,” Giesbrecht said.

The punch had been a long time brewing. Once a substantial pillar of Canadian cultural policy, support for magazines has all but disappeared under successive governments.

Only when one takes time to tally up recipient lists across funding envelopes does a picture emerge of an utterly decimated program. In the space of 15 years, Canada Periodical Fund project grants to magazines declined 94.5 per cent, from $25.3 million  in 2000-2001 to $1.4 million in 2013-2014, with the number of recipients falling from 418 to 53. Meanwhile, distribution support plummeted from 8,000 periodicals receiving discounted postal rates in 1990 to a meagre 804 distribution assistance grants issued in 2014, a 90 per cent drop.

Further, under the Harper government, the Canada Periodical Fund gained a spectre of ministerial control, through cancelled funding recommendations and inducements to glorify Canadian history in exchange for needed support.

In 2012, publishers of a number of nonprofit, editorially left magazines began circulating emails among themselves that recounted similar experiences – assurances from Canadian Heritage program officers that their funding applications had met the requirements and were being recommended for approval, only to be followed by several months of silence and then rejection letters instead of anticipated grants..

An Access to Information request for Briarpatch Magazine’s files revealed that in 2009 and 2011, approval recommendations to support the magazine’s business development work went forward to the minister’s office, and the amounts to be disbursed were entered into the government’s central accounting system. In both cases, after multiple email inquiries from program staff inquiring about the status of the recommendations, internal memos were returned stating the applications were rejected, accompanied by a six-word rationale from then-minister James Moore: “I do not support this grant.”

A follow-up request to review This Magazine’s files revealed that its 2012 funding was also approved by a departmental committee, yet later rejected, this time with the decision rationale redacted. Meanwhile, the magazine publishers received vaguely worded letters stating their projects did not meet the needs of Canadians, with no further information about how their applications could be improved, giving rise to a sense that editorial content factored into the rejections.

“Before…it was not politicized. (The fund) was really invaluable, really important stuff,” mourned David O. Mitchell, who was editor-publisher when Briarpatch Magazine at the time.*

While a decade or two may seem like a gradual change, in the long view of Canadian cultural policy, it’s been like stepping off a cliff.

Support for Canadian periodicals reaches as far back as the 1849 Post Office Act, which offered discounted rates for reading materials. Although Canada wasn’t even a country yet, the idea of helping information travel to remote communities across vast geography was accepted as a valuable public good, akin to railroads and irrigation systems.

“Newspapers are now delivered by post at a fraction of their cost of delivery, since they are deemed to have an educational influence,” states a 1948 Encyclopedia of Canada entry. Not only were newspapers included in the postal discount, but also magazines and association newsletters.

The postal discount was supported by funding from Canadian Heritage. By all accounts, it was a successful program, evenly and objectively applied by Canada Post according to subscription numbers. The 1951 Massey Commission noted that publishers were satisfied and asked for nothing more.

After more than 100 years of relatively smooth operation, everything shifted in 1989. In a single year, Brian Mulroney’s Progressive Conservative government cut the postal discount grant from $220 to $72 million and removed daily newspapers and association newsletters from the list.

Then, in 1997, Canadian publishers lost the discount altogether to a U.S.-sponsored GATT challenge.

Chretien’s Liberals vowed to make up for the trade agreement loss with indirect distribution grants, today known as Aid to Publishers, but support remained parsimonious. The replacement program limped forward in its reduced state into the Conservative years, sitting at $69 million in 2010-2011. As rising postal costs created an increasingly shallow pool, the Harper government responded by reducing the number of publications invited to swim.

his was accomplished by tightened eligibility requirements. The Catholic newspaper Prairie Messenger, for example, lost its 2010 grant for not ensuring 80 per cent of contributors to a single issue published in 2008 were Canadian citizens or permanent residents as recognized by the Immigration Act.

One of the early responses to the resulting loss of magazine diversity was the Canada Magazine Fund, launched with fanfare in 2000. But the fund’s fate was no different than the postal discount. It began with a $25-million pool for business development and editorial support aimed at small magazines. By 2010-20113 the pool, renamed the Canada Periodical Fund, hit a low of $860,000, with no special emphasis on small magazines. Funding drifted toward large commercial chains, and editorial support was cancelled, leaving only funds for marketing and business development.

Since its inception, the CPF also provided grants for industry development, including excellence recognition programs. The WMAF was one of the first organizations to receive a $25,000 operating grant in 2000-2001.

“(The awards are) about the content and the long-form story,” said the WMAF’s Giesbrecht. “It’s literature, essentially. I don’t want the genre to get lost in a digital universe. I want to preserve our attention spans. Our industry is host to the craft.”

The annual events themselves were hardly lavish, red carpet affairs. The main point was to bring western Canadian writers, editors, designers and publishers together in one room once a year, with the lure of printed certificates and small cash prizes.

“Everyone came and handed out copies of their magazines. It was a swap meet of their pride and joy,” said Giesbrecht.

Clearly, former prime minister Stephen Harper didn’t share enthusiasm for the “swap meet.” Defending $45 million in cuts to arts and culture in 2008, he famously opined that “ordinary Canadians” had no desire to fund “a bunch of people at, you know, a rich gala all subsidized by taxpayers claiming their subsidies aren't high enough.”

The government’s lack of enthusiasm was meted out in deeper cuts. In the first full year of the industry promotion envelope, 2001-2002, more than $4 million was disbursed, with the lion’s share going to Magazines Canada. By 2013-2014, Collective Initiatives grants had fallen to $1.1 million, many of them multi-year.

The goal changed as well, from celebrating the craft of the story to maximizing economic returns. “They wanted to see some way to generate an ROI (return on investment) for each component, an ROI in terms of building business out of the awards,” said the NMA’s Gould.

It was like chasing a ping pong ball. Although the grants were meant to promote sustainability, the overall funding focus was shifting around, said Giesbrecht, pointing to the latest policy direction, promoting Canadian history.

Then, in January 2014, all programs involving excellence recognition were bumped out. The news came as a shock to the national foundation, which had begun working on its new program year in anticipation of a grant application submitted months earlier.

The irony, said Gould, is that the National Magazine Awards themselves had never been part of the NMAF’s grant submissions, which focused instead on year-round projects to mentor and promote the work of writers. The only federal connection to the awards was some digital media categories sponsored by the Government of Canada.

“The policy is too much of a blunt tool,” agreed Giesbrecht, noting that the real task of the western foundation began after the awards night, transforming winning pieces into downloadable curriculum packages for teachers and professors. “We did discuss that with Heritage, but they went back to the (new) policy,” she said.

Since the cut, the National Magazine Awards successfully retooled its grant application, highlighting ongoing industry promotion work and removing reference to the digital award categories.. Funded projects include newsstand promotion, joint marketing and workshops geared toward helping writers market their ideas and maximize the return on investment for award-winning pieces.

The Western Magazine Awards is trying to keep afloat and undertake an organizational review without funding this year.

The board is now honed in on recruiting more sponsors and switching to volunteer mode. “We’re recalibrating,” said Giesbrecht. “We’ve been wracking our brains.”

“We need to rise to the occasion. We need to figure out how to preserve long-form writing.”

Canadian Heritage isn’t talking about the cut. A spokesperson offered via email that the ministry supports “projects designed to deliver measurable and tangible results, to optimize available funds, and to meet the needs of Canadians.”

Perhaps taking a cue from their funders, Magazines Canada was similarly tight-lipped, answering, “Unfortunately, we are not in a position to comment at this time.”

Among the various lists of “things Harper broke” now circulating on social media, the Canada Periodical Fund has escaped attention. More than a century of support for Canadian publishing, once a hallmark of the country’s cultural policy, lies in near-ruin. Without a sustained and vocal advocacy campaign, Canada’s once-diverse media ecology seems destined to, at best, eke out a sadly flattened existence.

*Editor’s note: the full story of Briarpatch's funding history is forthcoming in an article in ANSERJ, the Canadian journal of nonprofit and social economy research.

Correction: An earlier version of the article misspelled Jennifer Giesbrecht's name and misspelled the Canada Periodical Fund in one instance. We apologize for the error.