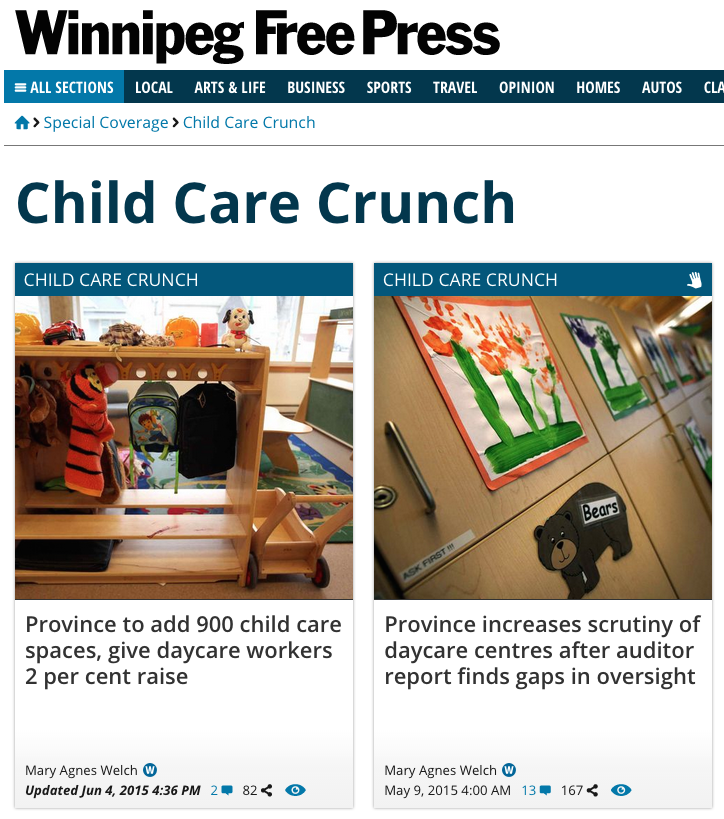 A day before she left the Free Press to become a pollster, Welch reflects on some of the big stories of her career.

Mary Agnes Welch thought she was going to be a historian. But after working at the University of Alberta’s student newspaper, she changed course. She went on to attend the Columbia University Graduate School of Journalism, working in the United States for a year after graduating, then returning to Canada to work at the Windsor Star. In 2002, she joined the Winnipeg Free Press, where she has been covering public policy ever since. She was nominated for a National Newspaper Award in the beat category in 2011, 2012 and 2013, and she has been part of two teams of reporters nominated for a Michener Award. Taylor Rattray caught up with her on her second-last day at the Winnipeg Free Press to talk about her series on childcare in Manitoba. This interview has been edited and condensed for clarity.

J-Source: How does your background in journalism influence the stories that you’ve been doing as of late?

Mary Agnes Welch: I covered city hall and then I covered the Manitoba legislature, so I always had an interest in public policy politics and policy stories. My beat right now and for the last several years has been the public policy beat.

There are a couple female editors at the Free Press who are really interested in it and encouraged us to look at it. My colleague, Mia Rabson, who’s one of my best friends, just had a kid, so that also kind of influenced our interest in it. It was just a topic we had never really tackled and it seemed like every parent you ever talk to just couldn’t get childcare, even though Manitoba’s system is actually pretty good comparatively.

J-Source: There was a huge amount of research and work put into these stories. Are you used to doing series like that?

MAW: I am, yes. That’s kind of what I do here. I kind of pick a big thing and spend, if I’m lucky, a few weeks on it and kind of plan it out. Planning stories out is what I’ve become good at. The other thing we did as we were thinking about this is we actually did a call-out. I think papers are doing this more and more. It used to be you would keep your ideas really close so nobody else finds out or no competing media find out. But we actually did a Twitter shout out and a blurb on our website, calling out to parents to send us their stories of searching for childcare. I probably got 75 emails from parents. That became our little well that we would go back to.

J-Source: What was the most challenging aspect of working on these stories?

MAW: One challenging aspect was the gaps in the data. It’s hard to actually know how many parents are on the waiting list. There’s this central provincial waiting list, and everyone always say, “Oh, it has 12,000 people on it.” Well, that number is really fuzzy, so it’s hard to know if that’s an accurate number.

It was also hard to know the way to measure the quality of child care. One of the arguments we wanted to make was that it’s not just about getting a spot for every kid. That’s maybe the first thing we need to do. It’s also about having a really high-quality spot for every kid, especially poor kids who maybe need some early childcare help.

They gave us the averages but not the names of each daycare. So a parent couldn’t say, “OK, my kid is at the Happy Splash Daycare. It was rated 4.5.” Parents couldn’t actually figure out how their daycares were rated, so I think that was a frustration. There were just these gaps in waitlist data, and that was kind of a frustrating thing.

Another challenge might have been the ideological focus. We got a lot of blowback from folks, even from the Conservative party, who think that the best thing for kids is to stay home with mom. We came down on the more feminist side of childcare, where we actually want women to work or at least have the choice to work, and know that their children are in good quality care.

We often got a fair bit of hate mail from folks saying, “Why do I want to pay for some lady to have a kid? If she can’t afford to stay home with her kid, then she shouldn’t have had a kid in the first place.” So we found ourselves constantly answering emails or letters to the editor.

J-Source: How did you deal with that criticism?

MAW: When we did our very first story, we acknowledged our perspective that, this is what the research shows. There’s a huge economic benefit to having women in the workforce, but one of the things that stops them is lack of childcare.

That was the other interesting thing about these stories. If I got 75 emails from parents, I would say 73 of them were from women, not from men. We tried really hard to make this not just a women’s issue. It’s a family issue. It’s also a dad issue. But we just talked to a lot of moms and it was hard to remind ourselves and readers that this is not just a lady issue. It’s a Canada issue and a family issue. We just got used to those emails and we had a planned reply to a lot of them. We relied as best we could on the evidence. That’s maybe another gap in research there’s not a lot of national studies about the benefit to the economy in having women in the workforce and what’s the spin off-effect of having public investment in childcare. So it was sometimes difficult to find that evidence, but it was out there, so we tried to rely as best we could on the numbers, facts and figures.

J-Source: Was there anything particularly surprising that you discovered through the research?

MAW: I think I was surprised by how many parents had a panic as their maternity (leave) was ending, because they didn’t have a spot yet. We just heard story after story about that. The next surprising thing was that a lot of parents didn’t feel really confident in where their kids were.

They took a spot because it was all that was there and they felt a little bit dodgy about it, but they had to take that spot to go back to work. That was a surprise in a province, that has, arguably, the second-best daycare system in Canada with the most public funds next to Quebec. And the NDP government, to their credit, is building a crap-load of daycares. Even with that, there is this huge gap.

J-Source: Did you find anything changed after these stories came out?

MAW: It’s hard to know because the NDP government has just announced and they’re going into an election, so this is an election thing that they are going to move towards universal daycare in Manitoba. It wouldn’t be quite like how Quebec’s program is, but essentially a space for everybody who wants it.

So if there are 12,000 names on the waitlist, their goal is to build those 12,000 spaces and keep prices really low. For subsidized care in Manitoba, prices are already fairly low, but to keep those prices low or even lower them. I think that was already, realistically, the direction the NDP was going because it’s a good family election promise. There was already a debate going on, but I think our series fostered and bolstered the debate over, “Do we give parents money or do we invest in public spaces?”

J-Source: Tomorrow is your last day at the Winnipeg Free Press. What’s next for you?

MAW: I’m going to go be a pollster. I’m going to go to Probe Research, which is the public polling firm in Winnipeg. I’ll be doing research, polling and the qualitative research for Probe’s clients, a lot of their public, political polling.

J-Source: Why did you decide to change gears like that?

MAW: It was a really hard decision. I’ve been a die-hard journalist for almost 20 years. I’m nearly 42, so it seemed like the right time to decide, “OK, I’m either going to be a journalist for the rest of my life or maybe I’ll try something different.” It’s no secret that things are not ideal in newspapers right now, so I thought this sounded like a super-cool job and a way to do something different with the rest of my life.

Taylor Rattray is graduating from the University of Regina School of Journalism this spring. She interned at the Regina Leader Post and CTV Saskatoon.