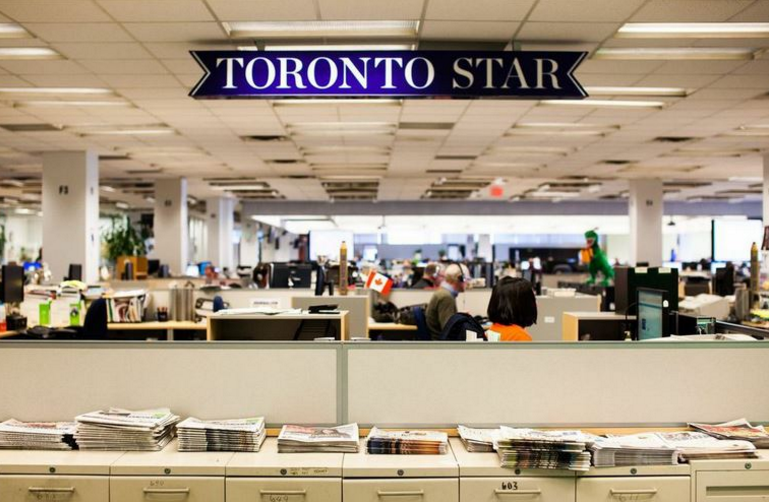 In memo to staff, Cooke affirms they will “keep to the Star’s conviction and direction.”

The following memo was sent to Toronto Star staff on Aug. 9, 2016, by Michael Cooke, editor.

By now you will have read David Holland’s email.

This is a very difficult day for our newsroom.

Star Touch is evolving, based on our experiences and informed by the research in the first year of publication. Sadly, more than 26 of our colleagues hired as temporary employees to launch Touch will see their temporary employment end.

Also, declining print advertising means as many as 19 permanent staff hired in the traditional newsroom are being laid off.

On every level – professional and human – the loss of these people hurts.

These are hard decisions.

Hardest, of course, on those whose jobs are being eliminated, and it is those people who are first in our thoughts.

They have done great work for Touch and for the Star more broadly, and what is happening today is not their fault. They have done everything we have asked – making Touch in particular a splendid new platform for Star journalism.

I have today met with as many of these journalists as possible to give them this bad news. And I know you join me in saluting them.

Consistent with the union collective agreement, staff layoffs are based primarily on seniority. There are basically two groups of people affected. Some employees working on term-limit employment (in tablet, digital and video) will be leaving earlier than planned. Some phasing in of this is required and these individuals will be notified directly about departure dates.

There is also a group of permanent employees being issued layoff notices. Most of these are Journalists and Team Editors hired over the past 18 months. For this group, a 90-day notice period is required.

A layoff notice triggers a right for others with greater seniority in the same classification to voluntarily resign and receive severance, potentially saving the job of someone named for layoff. This may give longer-term employees the opportunity to consider whether the time is right for them to retire or resign, based on their personal considerations and the direction of the newsroom and the business.

We have contacted union leaders with the intent of starting such discussions quickly, to provide greater certainty to all newsroom staff.

What do I mean by the direction of the business? You all read the industry news that I read, and just a couple of weeks ago Torstar announced its latest financial results. There is continuing pressure on print advertising revenue … across Canada, the U.S. and Europe. Our print audience remains relatively stable and loyal, but advertisers continue to put more and more of their money into digital … mostly Facebook and Google.

What do I mean by direction of the newsroom? We have to keep rethinking everything we do and how we do it. We have to, and will, keep trying new things. Everyone here agrees with that.

We launched Touch in September of last year with the aim of building a new digital platform. Following on the success of LaPresse+, from which we borrowed heavily, we sought to offer something that is neither web nor newspaper, rich in interactive content that encourages deep reader engagement.

After a year of running the operation we have a better sense of the resources and revenues required to run Touch and to do so in a financially viable way. Unfortunately, this means we have to reduce the costs. The Star remains committed to Touch.

Better news:  our digital revenues are growing. Our new mobile site recently doubled its audience, and advertisers are coming to our web, tablet and mobile platforms.

While the old warhorse of print continues to provide the largest portion of our revenue (this is true of every newspaper I know), digital is clearly our future, and our newsroom will continue to reshape and reorganize around that future.

The old city and national departments have already morphed into what they are today led by Wendy Metcalfe (Beats/Bureaus/Columns). We will move shortly to separate areas for Breaking News/Digital and for Projects/Features, and, after discussions, redeploy staff. As our numbers are reduced, we will focus even more on our key content areas: Toronto news, breaking news, investigations, co-pro projects, and accountability journalism.

For now, departments such as Business, Sports, Photo, Entertainment, Life, Special Sections will remain outside these three groups.

Everyone should understand that most, if not all, core newsroom jobs will be affected by these changes. Everyone will be invited to participate in the re-shaping.

Where does this leave us? Well, a newspaper-watcher commenting on the hollowing-out of many newsrooms wrote recently about “churnalism” and the procurement of “oven-ready copy”…

“… space in newspapers can be filled. The end result … lacks any real value. It is not journalism. It is pointless material without any public benefit.”

We’re not going there. We will keep to the Star’s conviction and direction.

Several disciplines link together to produce Star journalism, but our reporters are the tip of the spear.

The Star has had a long and noble presence in Toronto. It has always had a large staff of reporters whose talent matched the paper’s ambition — that staff brought honour and success to our paper, and continues to do so.

Yes, gaps have appeared from those dozens of reporters who took the various buyouts. We’re a smaller team now.

Torstar Chair John Honderich said during deliberations on these latest changes:   “Nothing can be the way it was. Nothing, that is, but our firm and forever commitment to great journalism and the Atkinson principles.”

Thank you for the work and the belief that has brought us to where we are today and that will keep Star journalism alive and vibrant. Hundreds, maybe thousands, of journalists were in this newsroom before us, building and shaping the Star’s great journalism. If they could see you today, they’d be proud.