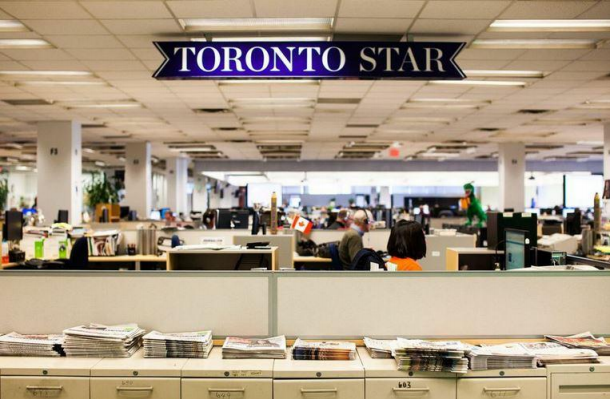 Cooke, who is leaving after nine years at the helm of the Toronto Star, will step down on June 1.

Michael Cooke, the editor who shepherded the Toronto Star through the mayoralty of Rob Ford and the launch and subsequent closure of its tablet edition, will step down from his post at the beginning of June.

In a statement released March 23, 2018, Torstar announced that Cooke will leave the Toronto Star June 1. The release states that Cooke, who is currently chair of Journalists for Human Rights, will “become more involved in training international journalists on human rights reporting.”

Cooke joined the Toronto Star in 2009 after stints at the Chicago Sun-Times and the New York Daily News. He poured resources into investigative journalism, and made a point of involving the Star in the story — “Star Gets Action” became a familiar headline on A1 during his tenure.

The paper became a huge part of the story after then-Star reporter Robyn Doolittle broke the news that Rob Ford had been filmed smoking crack. After six months of public debate over whether the tape actually existed, it was finally confirmed by former Toronto Police Service Chief Bill Blair.

Cooke was also editor during the paper’s rocky attempt at producing a viable tablet edition. Star Touch was launched with much fanfare in September 2015. The Toronto Star hired 60 new staff members to work on it, and touted the freedom it gave journalists. But unlike a similar app produced by La Presse, which has been successful, Star Touch struggled to meet audience goals. “The audience is not as big as we had anticipated but it’s still a key priority for us to grow that core audience,” Torstar spokesperson Bob Hepburn told J-Source in 2016. In August 2017, the app was shuttered for good.

In a newsroom memo released when the Star Touch closure was announced, Cooke said that they tried their “damndest” to make the tablet app work. “Star Touch was an editorial success of which we remain proud. It was named a best news app by Apple and the engagement numbers remain stunning,” he wrote. “But the audience is too small to be sustained as a business.”

Like many newspapers across Canada, the Toronto Star has felt the impact of declining print advertising revenue. In February, John Honderich, chair of Torstar’s board of directors, told the Globe and Mail that “We have very little time left.” However the company did report a profit in the fourth quarter of 2017.

In a digital memo, Cooke said he was staying with the paper until June, “to complete the early part of the Star transformation.”

“For you in this newsroom, the next two years are going to be challenging,” he wrote to newsroom staff.

The Toronto Star has retained a recruiting firm to search for a new editor.