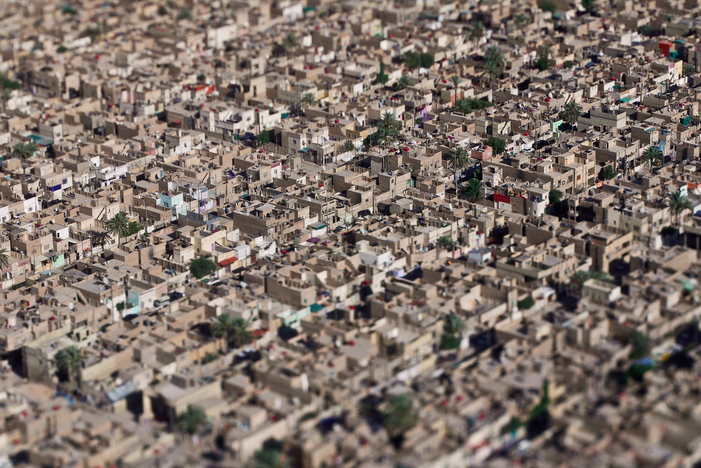 Using apocalyptic symbolism and mirrored faiths as narrative structure, this 2004 Harper’s essay is a damning critique of the Bush administration’s attempt to re-shape Iraq.

Naomi Klein’s critique of the Iraqi reconstruction project in “Baghdad Year Zero” is so damning because of its repeated apocalyptic symbolism, a literary strategy that highlights ironic parallels between the most radical elements of the Bush administration and their sworn enemies, the Taliban. The neoconservatives who conceived the Iraq War, and then led the charge to crack open the country’s economy, saw reconstruction as an ideological mission. Iraq would be an experiment in radical laissez-faire economics, a chance to prove in a laboratory setting the absolute truth of their belief in the power of greed.

In her indictment of this experiment’s cataclysmic failure, Klein frames this mission in missionary terms, drawing an analogy between the neoconservatives and their ideological opponents, Islamic fundamentalists. She uses religious vocabulary to portray the reconstruction plan as an act of faith, a crusade, an imposition of “the most literal, unyielding interpretation of their sacred texts.” It does not matter that their holy book was Milton Friedman’s Capitalism and Freedom rather than the Qur’an. The result is an unbending fanaticism that, when applied, turns reality into a nightmare.

There’s a double irony here. As the neocons created the opposite of what they had intended, not a “model free market” but “a failed state that no right-thinking investor would touch,” they revealed how they are a perfect mirror of the forces they claim to be fighting against: equally inaccessible to reason and unable to learn from their mistakes.

Eschatological images recur throughout “Baghdad Year Zero.” The neoconservatives imagine their crusade “as a kind of Rapture.” Iraq will be “redeemed,” “cleansed by fire” and “born again.” It will become a “beacon unto the world.” Klein says that Bush planned to “trumpet” the end of the occupation, a possible allusion to the archangel Gabriel, a harbinger of the end times important to both Islam and Christianity. Both the Taliban and the neoconservatives are portrayed as “true believers,” who operate on faith and “pray harder” when their plans go awry. The military’s challenges to the reconstruction plan are described as “heretical.”

But if Year Zero is the Rapture, then who is the Messiah? General Motors, Halliburton, Walmart and McDonald’s will be the Saviours of Iraq, bringing about a newfound corporate paradise. All the evil-doers—the state factories, the Baathist civil servants, the Iraqi army, indeed, the entire corrupt society that existed before—must first be “disappeared,” washed from this earth. It is the job of true believers, the young Republican pilgrims, to clear the way. As in Christian and Islamic chronology, the new age will be marked from this founding event—the birth of Christ, the Hijra—and we will begin counting from zero.

Klein is always searching for signs of the coming corporations. She finds one, literally, in the article’s first scene, when she sees a Saudi Arabian honey billboard, which seems to signal the arrival of the Reconstruction. In a fluid transition, she says it reminds her of all the plans that inspired the neocons. Iraq was to be a land of honey, a Canaan, where the neoconservative hopes of deliverance—from the unions, the environmentalists and the Democrats—could finally be realized. But this sign turns out to be a false one; the corporations never come.

Though most of Klein’s article is analysis and polemics, she gives it form through a clear narrative structure that charts the ups and downs of L. Paul Bremer’s quest to realize Friedman’s capitalist vision. It’s a classic tragedy ending in Bremer’s downfall, after a violent crisis caused by his faith in greed. Klein also introduces a secondary character, Mahmud, who humanizes and explains an ordinary Iraqi’s path toward the insurgency. She can easily imagine him joining al Sadr’s Mahdi army one day, a movement that is portrayed not as the work of fanatical terrorists, as in the American press, but as a rational response to the violence of reconstruction.

Klein uses scenes sparingly, but effectively, to depict the absurd consequences of imposing a ready-made belief system, one designed for another place and time, on a living society. The best example is a surreal visit to a soap factory. Everything is in chaos, and nothing works the way it’s supposed to. Workers sleep in a state factory that could be driving the reconstruction, conveyer belts don’t convey and a man whittles plastic caps for lack of spare parts. We learn that the workers recently stabbed a bodyguard, shot up the manager and are now on the verge of revolt. The neocons should have expected all this—it is no wonder that workers should fight for their jobs or that investors should flee the resulting chaos. Bremer wasn’t guided by events, however, but by his sacred texts, which promised that “shock therapy” would lead to salvation.

Klein’s analysis shows that the neoconservative project, like all fundamentalisms, divorced itself from reality as it tried to remake it, quickly spinning out of control. When they take hold of a whole society, true believers like the neocons, the Taliban or the Khmer Rouge (from whom the term Year Zero is borrowed) can justify any human toll in the name of their faith. Even when they create the opposite of what they prophesied, a hell on earth instead of an earthly paradise, they refuse to admit they were misguided. Failure is a temporary reversal—a bit more wandering in the desert—a chance to come up with a new prophecy of when, or where, the Messiah will come. They just pray harder. And read a bit more Milton Friedman.