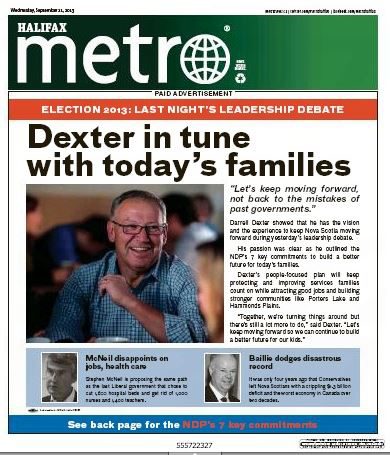 It’s not the first time that a commuter paper has sold its front page in the middle of an election campaign as a paid advertisement, writes Sun Media's national bureau chief David Akin.

This was the front page of the free commuter newspaper Halifax Metro today. Looking at it quickly, it might appear as if Metro‘s front page editors were making some editorial judgements about the winners and losers in the first debate of the Nova Scotia general election campaign, held yesterday evening at the CBC Halifax studios. The lead headline is “Dexter in tune with today’s families” while the sub-heads with Liberal leader Stephen McNeil reads “McNeil disappoints on jobs, health care” and with PC Leader Jamie Baillie, “Baillie dodges disastrous record.”

Of course, the editors of Metro (likely) had nothing to do with this. This was — as the fine print (see below) — says, a “Paid Advertisement” and it’s not the first time that a commuter paper has sold its front page in the middle of an election campaign. Most recently, Christy Clark’s BC Liberals bought the front page ofVancouver 24 Hours to pronounce her the “Comeback Kid” in a faux-news style after a debate there. (Turns out the ad was right) And in the 2011, the federal New Democrats put a smiling Jack Layton on a faux-front page of the Toronto Metro.

@davidakin how do you maintain editorial integrity after that?

To continue reading, please go to David Akin’s On The Hill blog, where this was originally published.