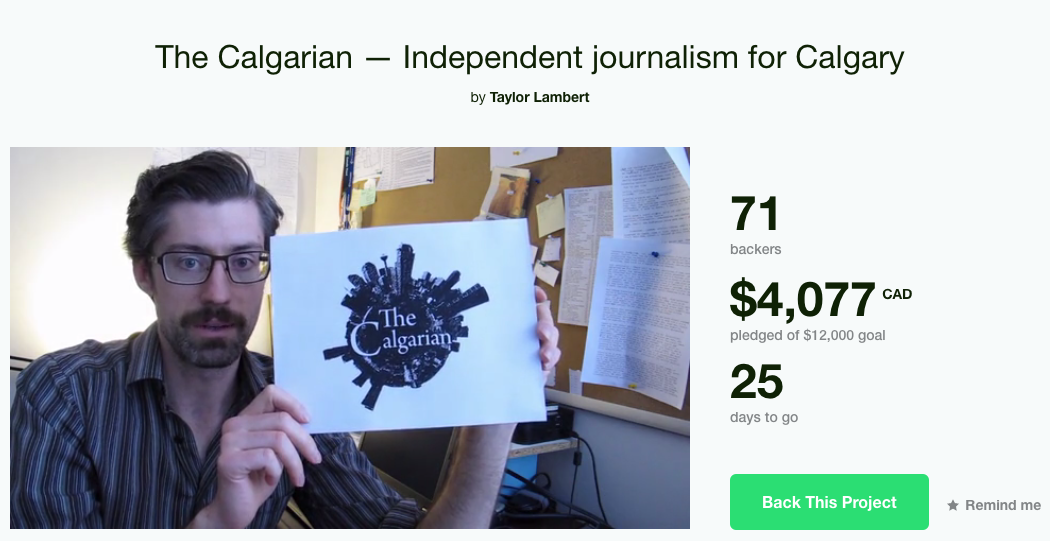 New Calgary media outlet hopes for a jumpstart with Kickstarter

The founder of The Calgarian wants to raise $12,000 by Jun. 5 to start reporting by September.

Calgary may be getting a new digital media outlet—if its founder can crowdfund $12,000 by Jun. 5.

Taylor Lambert, a Calgary-based freelance journalist, launched his Kickstarter campaign for The Calgarian on Apr. 6. If successful, the new independent media outlet will launch in Sept. 2016, focusing on stories that have “fallen through the cracks” and are important to Calgarians.

“I saw the gaps in the local media coverage here,” Lambert told J-Source. “This is my attempt to fill those gaps.

Lambert graduated from Concordia in 2008, and has worked as a freelancer in Calgary since 2012. In 2016, he started a brief stint at the Calgary Herald as a freelance reporter that ended the day after he started his Kickstarter. Working there was what made him realize there was a need for another media outlet in the city.

“It felt like a lot of the most important stories weren’t getting the attention they deserved,” he said. “Part of that was editorial choices, but I think a big part of it was also just the lack of resources.”

The newsrooms of the Calgary Sun and the Calgary Herald were merged on Jan. 19 after Postmedia laid off 90 employees across the country. But even before that, there was a lack of diversity in the Calgary media landscape. One alternative news weekly, Fast Forward Weekly, folded in 2015, with no replacement coming forward.

Calgary is a rapidly growing and changing city with many, many stories in it. “As the city becomes more complex we have fewer reporters to cover things,” he said. “It’s just natural and obvious that there will be things that fall through the cracks.”

“It’s less about specific areas or specific stories in so much as how they’re covered,” he added. On The Calgarian’s Kickstarter, he lists some of the stories the outlet may report on if they are fully funded: historical choices that led to Calgary’s urban sprawl, and how the city will approach homelessness are a few of the examples.

If he gets $12,000 by the deadline, the funds will go towards salaries for himself and another reporter, as well as a small freelance budget. Further funds will be provided through Patreon.

Lambert wants to cover stories that not only discuss the growth of Calgary but issues that he believes fly under the radar, like poverty and racism. “People kind of get stuck within their own little worlds and don’t see beyond the horizons. So I think that that’s something that I’d like to address with this.” He also wants to provide a platform for a diverse group of writers to be able to contribute.

So far, he’s raised $4,077—about $2,000 shy of the halfway mark. He’s optimistic about his chances, pointing to the success of Canadaland and the National Observer in raising funds through crowdfunding to support their reporting efforts.

“There’s been some questions as been some you know social media speculation on whether or not this can survive,” Lambert noted—but that’s why he wanted to start The Calgarian with Kickstarter funds. “If I don’t get the $12,000, I don’t get anything.”

“If there’s enough people willing to kick in to make this thing a reality then that I think it’s something that can be sustained going forward in the long term.” 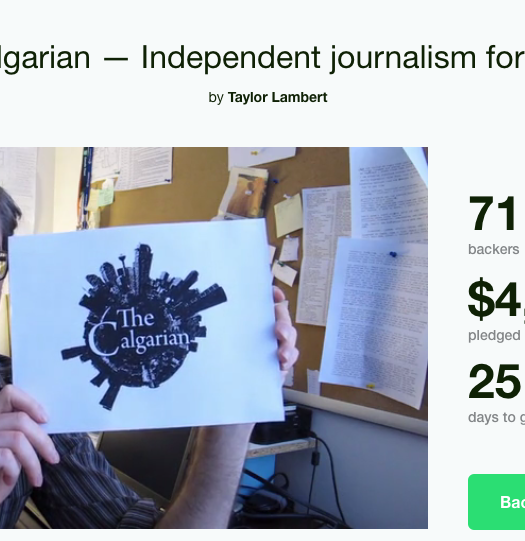 New Calgary media outlet hopes for a jumpstart with Kickstarter