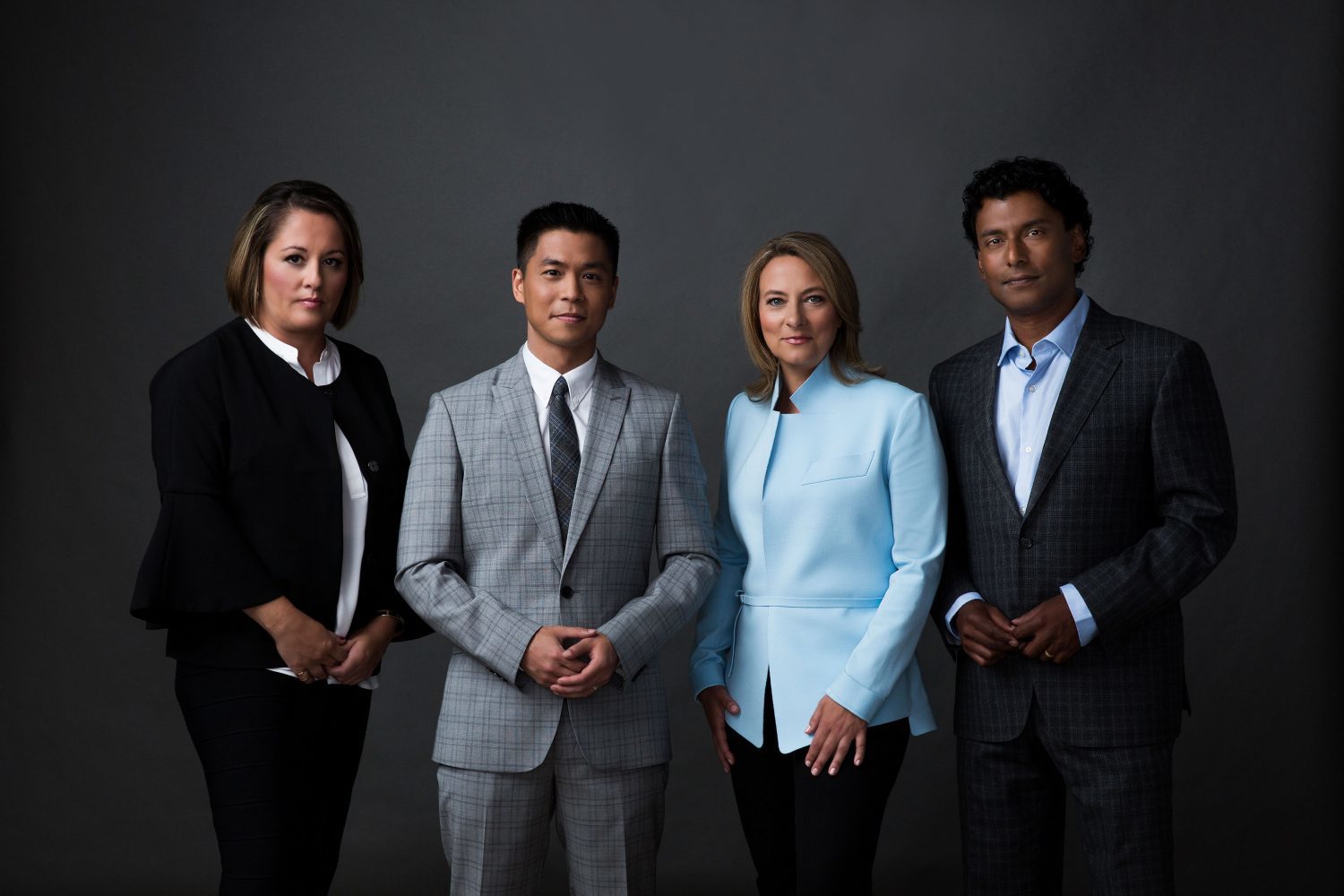 The new National: Are four TV anchors four times as good as one?

You widen the potential of attracting more eyeballs by having more than one anchor.

Most sailors know an anchor weighing just a fraction of the boat’s weight will help her stay put. If so, the CBC is sending a message that to steady the good ship The National, it needs not one or two, but four anchors.

Monday’s debut of the revamped The National newscast has audiences wondering if four anchors are four times the heft of just one (Peter Mansbridge) — or rather are they one-quarter of one anchor.

For decades, people everywhere in North America tuned in to TV to get their news. Yet news consumption habits have shifted dramatically over the last decade or so, prompting a blunt assessment from the Reuters Institute for the Study of Journalism at Oxford: “Television news as we know it increasingly serves the past, not the future.”

That seems to be what Canadian researchers confirmed this year when they looked at where we get our news: 76 per cent of news consumers become informed about the world from online news sites and social media compared to 70 per cent from their TV flat screens.

So, the discussion of change — even one as major as the relaunch of the public broadcaster’s national newscast — mostly interests only devoted TV news viewers (hint: mostly over the age of 50) and journalism scholars.

As a journalism scholar who had a career reporting and producing in public broadcasting (mostly at the CBC), I am paying attention to the new National. This week I’ll be watching four anchors: Adrienne Arsenault in Toronto, Rosemary Barton in Ottawa, Andrew Chang in Vancouver and Ian Hanomansing in Toronto.

And CBC hopes many Canadians will be doing the same. They need the boost. Most TV viewers are getting their nightly news fix from other places: The National trails CTV and Global.

All four anchors played prominent roles on opening night. They chatted together — via big screens — about the top stories. They related the news to their own years of reporting. Chang and Hanomansing recalled how they had each reported from Abbotsford, B.C., and both reminded viewers they had both spent years in Montréal as reporters as they talked about that city’s newly elected mayor.

The National on Monday was fresh and vibrant, a dynamic much more exciting than Mansbridge’s last newscast, or even his first on May 2, 1988. Mansbridge is perhaps the last from the long tradition of the solo all-knowing anchor – the Walter Cronkite-style news reader whom viewers trusted since the 1950s to bring stability on an otherwise ephemeral medium. It seems anachronistic at a time when it’s easier to turn to your Facebook feed on your cell phone to discover what’s happening.

Research done last year for The Shattered Mirror, a report on the future of news by the Public Policy Forum (PPF), asked Canadians how they learn about what’s going on their communities and the world. Most respondents told PPF survey researchers that while they get much of their news from Facebook, when something big is happening, they don’t want to rely on their friends: They prefer a trusted source.

And, more often than not, that source is an established news brand or a particular journalist, such as a television anchor. So it seems they would take an anchor over an algorithm any old day.

In our age of fake news, the platform more Canadians are willing to “completely trust” for news is television. Apparently, there is still a relatively high level of respect for the role of journalists and their ability to hold the powerful accountable, as well as the role of TV anchors to inspire trust in their audiences.

Exactly why the anchor holds a magnetic power over the audience seems somewhat of a mystery, even to those who have enjoyed long careers doing it. Peter Jennings, a former CBC journalist who found fame at the U.S. network ABC, seemed confounded: “I am fairly convinced that although there is a factor of one-on-one communication between anchor and audience,” he told The Philadelphia Inquirer in August 1983, “I don’t believe people sit around with their tongues hanging out waiting for a particular anchor to appear.”

The traditional role of the anchor is diminishing. And yet innovations are rare. Most TV executives know that to get viewers they need to build a relationship with their audiences through their screens using anchors.

If you’re trying to allow audiences to identify with the people bringing you the news, you widen the potential of attracting more eyeballs by having more than one anchor.

CBC needs to attract younger viewers to stay viable and the new team (from 34 years old to 55) represents that generational change. Crucially, for a Canadian audience, the anchor needs to look and sound like the country, so add diversity in culture, race, age, gender and even class into that mix.

But there’s something else: One 2010 study determined that a successful news media personality brand needs to score high on trustworthiness, dynamism, sincerity, sophistication and toughness. No one person could embody all of those qualities today, so creating a cast of anchors at CBC exponentially expands the possibilities.

The challenge for CBC is not to suffer from a diffusion of the weight of one anchor to look like a four-ring circus.

While this non-traditional format seems novel this week, a version of it first occurred 40 years ago. In 1978, ABC’s head of news, Roone Arledge, was forced to break up the anchor team of Barbara Walters and Harry Reasoner — they so despised each other that the news resembled Family Feud.

But no superstar anchor could be lured to work at the lowest-ranked news organization, so Arledge created a cast of three anchors in three cities. He put Jennings in London, Frank Reynolds in Washington and Max Robinson in Chicago. The “floating anchors” concept was novel and flashy; some observers felt that ABC’s journalism grew stronger as the reporting took centre stage, pushing the anchors aside.

It was a rating success: ABC climbed, reaching a virtual dead heat with NBC and CBS (only after Cronkite retired). But the novelty didn’t last, so in 1983 when Reynolds died, ABC installed a single anchor — Jennings, who sat in the chair for another 22 years.

While ABC may have abandoned its experiment decades ago, CBC has no such luxury. News producers have to develop new formats and new strategies at a time when audiences may already feel topped out by a day’s worth of information before they sit down to join the on-appointment newscast.

Disclosure statement: The author worked as a journalist for CBC between 1981-1992 and 2003-2007. The author is married to the president of the Public Policy Forum, which is mentioned in this article.

This story was originally published on The Conversation.

Memo: CBC News has a “sneak preview” of the new The National

Read More
Memo: CBC News has a “sneak preview” of the new The National