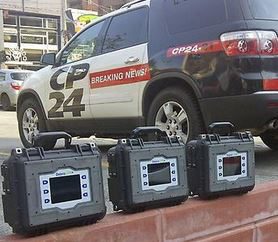 Dejero’s application is so easy for broadcasters to use that its founder says every television news organization in Canada—except Global—uses it. Its clients in the U.S. include ABC, NBC, CBS and Fox. J-Source looks at how Dejero works.

When CTV Toronto reporter Colin D’Mello and photojournalist Peter Leclair set out to do four live hits from different locations across the city capturing the severity of a snowstorm, they didn’t travel in a traditional satellite or microwave truck.

The duo used Dejero LIVE+ 20/20 Transmitter, a Canadian technology that pushes the live feed back to receivers in the newsroom using a mobile network. With a strong connection, Dejero transmits HD-quality video live.

“If we had a live truck, we would have never been able to do that,” said D’Mello, referring to the time it takes to prepare a truck.

The portability of Dejero makes it ideal for live shoots since there’s no need for long cables or live trucks, which aren’t allowed to park in some areas, such as airports. It’s so convenient that its Waterloo, Ont.-based founder, Bogdan Frusina, said every television news organization in Canada—except Global—uses Dejero. Its clients in the U.S. include ABC, NBC, CBS and Fox.

Frusina, who has 13 years of experience working for tech companies such as RIM and Waterloo Maple Software, pitched the idea in 2008 to Toronto news channel CP24. “I think the official line was: ‘If you’re able to create this, you create a holy grail of broadcasting,’” Frusina said. He said Dejero allows broadcasters to “go live from anywhere in any situation without having to worry about anything. It’s really that simple: you push a button and you’re live.”

CP24 worked with Dejero to develop the first transmitters that followed the 2010 Olympic Torch run across Canada on a “torch cam” that was live streamed on its sister station CTV.

It was a “glorious proving ground” for Dejero, said CP24 director of news production Brian Carr, who worked with Frusina to develop the technology at the station. In 2010, Dejero ran on the 3G network and was mainly used at CP24 as a backup option for microwave trucks to plug into. Carr said CP24, which does more than 100 live hits a day, turns to the Dejero more frequently now as its primary option with the introduction of the LTE network, also known as 4G.

“I would say that at least half the time, those traditional microwave trucks are operating on Dejero transmitters.”

Dejero also has a storage feature, which allows the field team to record a video and transmit it back to the station more speedily than the traditionally used File Transfer Protocol (FTP) method, as described by the CBC.

CTV News Toronto used this “store and forward” option while covering the search in 2013 for two missing girls in Bon Echo Provincial Park, nearly 300 kilometres from Toronto. The station sent a photojournalist with Dejero in addition to a helicopter. “We dropped the disk off with the photojournalist and he drove south until he could get cell reception and then he was able to feed all the video back to Toronto,” said Peter Raymond, director of operations at CTV News Toronto. The feed was then relayed from Toronto to Ottawa and Kitchener, all in time for the six o’clock newscasts.

“Without Dejero the only other option for us then would be to fly the chopper back until they were in range,” Raymond said.

The technology isn’t perfect, of course. The feedback delay on a live hit “can be anywhere from 1.5 seconds to four seconds,” D’Mello said. “That little delay makes the whole operation look a little bit slower,” he said, adding that using Dejero for talkbacks between anchors and reporters is awkward as a result and the video can sometimes look digitized.

While Dejero can use Wi-Fi and ethernet feeds in addition to cellular networks and aggregate them for a better signal, there are limits. It won’t work in the subway, for example, so Dejero provides training on which situations are ideal for Dejero. And since microwave and satellite trucks provide cleaner and more reliable hits and also serve as mobile editing studios with storage space for shooting equipment, D’Mello said he doesn’t see them being written out of the newsgathering process quite yet.

“But you’re going to be seeing some stations relying on (Dejero) more and more each and every day, simply because you can take it into spaces where you can’t fit a truck,” D’Mello said. “It’s a fantastic tool.”