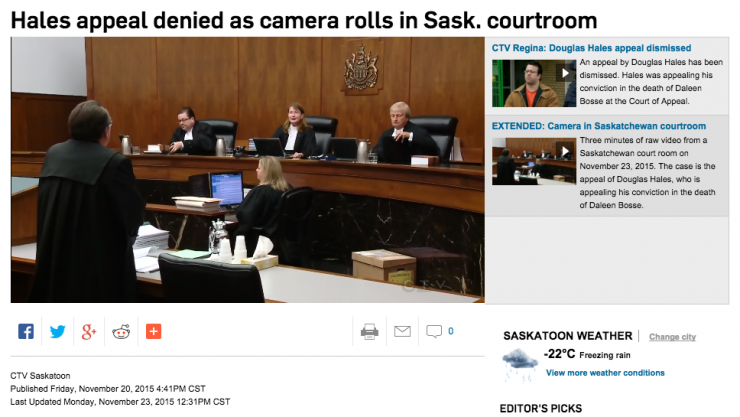 The appeal of a high-profile criminal case was heard in front of the Saskatchewan Court of Appeal on Nov. 23—and for the first time, a news camera was there to capture it all.

CTV News and Global Television were granted permission to have one news camera in the court for the proceeding, an appeal by Douglas Hales of his second-degree murder conviction in the death of Daleen Bosse 11 years ago. His appeal was dismissed by the appeal court on Monday.

His appeal hinged on whether a confession obtained through a “Mr. Big Sting”—in which police create a crime ring for the suspect to join and then use it to gain information from him—was admissible evidence. A Supreme Court ruling in 2014 placed stricter rules on how police conduct such operations, according to the CBC.

Bosse, a Cree woman who was studying at the University of Saskatchewan at the time of her death, disappeared in 2004. Her remains were not found until 2008, when Hales was arrested and charged. According to the Saskatoon StarPhoenix, her family worked tirelessly to keep her name in the news as they continued to hope for her safe return, and then for justice for her death.

Dani Mario, news director at CTV Saskatoon, said given the grounds of the appeal and the importance of Bosse’s story, they wanted to have a record of what happened in the courtroom so that the public could understand it better.

The appeal, which was centered on legal arguments and had no witness testimony, was an opportunity for CTV and Global to make their case for having a camera present. The trial wasn’t carried live, so both CTV and Global could cut out any material that that would have violated publication bans on names of individuals involved in the case.

Dawn Blaus, the courts communication officer for the Courts of Saskatchewan, confirmed to J-Source that this was indeed a first for the province.

It is not common to televise court proceedings in Canada, though that has been changing. Select Supreme Court cases are televised on CPAC, and media outlets can apply for permission to video record in federal courtrooms. In 2014, a Manitoba Queen’s Bench justice ruled that lawyers should assume that cameras can be allowed in any courtroom—if they don’t want the camera there, they have to argue against it.

“There are proponents and opponents to having cameras in court,” said Mario, noting that critics believe it may give rise to lawyers and witnesses who “over-dramatize” for the cameras, or that some witnesses may not want to appear for fear of being filmed.

Hales’s defence attorney had no objection to the presence of cameras, according to CTV. The Crown attorney, however, raised concerns that when the story was packaged for the news, it would be made up of the most interesting sound bites, according to Mario.

“We had a reporter in the courtroom; we didn’t carry it live; we honoured those publication bans; we worked well with other media to ensure that everyone had access to the footage,” said Mario. “I couldn’t be happier with the way that the judicial process was respected and so was the right of the public to understand what happens in courtrooms.”

Saskatchewan’s Court of Appeal already has a draft policy for allowing cameras in courtrooms, which says media can apply for permission to record the proceedings. Mario said the existence of the draft policy made it clear that they would be willing to entertain a request to allow have a camera in the courtroom.

The permission only applied to this case—but it may not be the last time a camera is allowed in a Saskatchewan courtroom. “In the future it, might open up the opportunity to use this as an example of when it went right,” said Mario.

The permission did, however, come with limitations. The camera couldn’t move, and they could not transmit images of the public gallery. As well, only one camera was allowed, which meant CTV staff had to run memory cards back to the station, where they were then passed along to other media who wanted to use them.

However, it gave the public an opportunity to actually hear and see the lawyers make their arguments and watch the panel of three appeal justices make their ruling. “As far as I am concerned, this is just a fascinating first step towards greater transparency of court proceedings like these, and a fuller understanding by the public of how the justice system works,” said Mario.