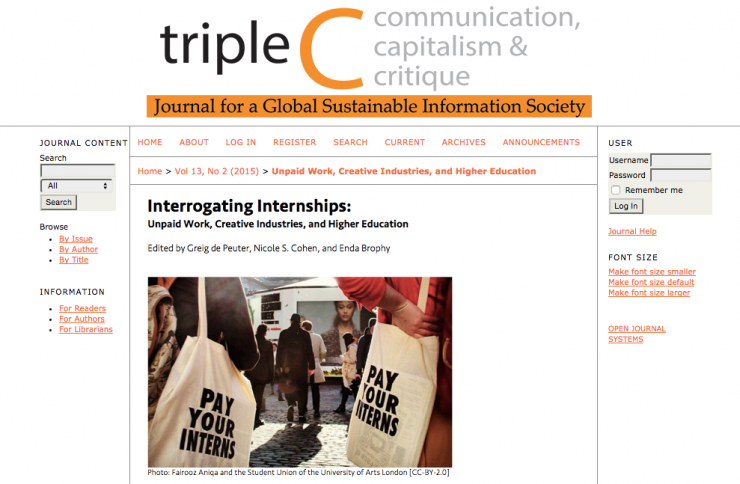 Internships are having a moment. They’ve been around for decades, but the past few years have seen a rise in public awareness and debate: should all internships be paid? Should the government increase regulation? And, should internships even exist at all? The latest issue of the international open-source journal tripleC: Communication, Capitalism & Critique, guest edited by three Canadian professors, is a chance to get some perspective.

“I think what really struck me was the wide variety, what a broad galaxy of labour arrangements exist under that broad umbrella term that we use—internships,” said Enda Brophy, a communications professor at Simon Fraser University. He’s one of the co-editors of “Interrogating Internships: Unpaid Work, Creative Industries, and Higher Education,” the special issue of the journal.

“It’s a kind of labour relation that has become normalized,” Brophy explained. “Certainly, my students just see it as something that you have to do. It is the new normal, I think, as far as being able to access the labour market.”

Brophy, along with University of Toronto professor Nicole Cohen and Wilfrid Laurier professor Grieg de Peuter, selected 21 articles for the issue. The articles cover a range of topics, from internships in reality television to journalism internships to the role played by higher education.

“We were looking to include not only scholarly voices but activists that have been involved in and around internships,” said Brophy. “The issue features pieces by journalists, it features interviews with activists and labour organizers that have been engaged around the questions of internships.”

The issue covers four main areas: conceptual and historical approaches, articles that describe internships in media and cultural industries, some that look at the overlap between internships and higher education and some that explore activism around internships.

“These are valuable pieces that show us how diverse internships are and how ambivalent they can be,” said Brophy.

Brophy said most observers agree there’s been an increase in the number of internships over the past 10 or 20 years. He said that normalization has taken the gloss off internships, and they have increasingly become a source of controversy.

“What’s happened in the last five years has been fairly remarkable,” he said, pointing to the creation of groups formed to fight for intern rights. He said organizations like trade unions have begun paying attention to the problems around internships.

Katherine Lapointe, who works with CWA Canada, said that the tripleC issue offers the chance to gain a wide perspective about what’s happening here, at home, and internationally.

“I think for those of us who are interested in advocacy around internships it’s so important to ground that advocacy in this kind of research and information, she said. “It’ll help foster, hopefully, new research on internships, but also advance the fight for more meaningful internships for young workers.”

Lapointe said her union sees the impact of internships on Canadian journalism, with concerns about long periods of unpaid work, and emotional stress that creates. To help address these concerns, CWA Canada is behind MediaWorks, a handbook for interns, freelancers and employees, and Storyboard, an online site for discussions about internships and other workplace issues facing media workers.

“People are under the impression you need to have some internships under your belt and that kind of experience before getting an entry level job,” she said. “There is this sense of discouragement or insecurity about entering a field where they probably have to take on unpaid work and then go into freelancing, where they’re going to be working probably under the poverty line for a few years if not more.”