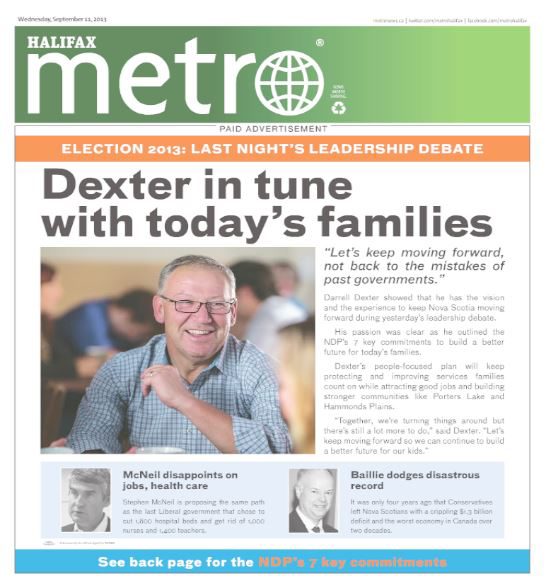 Are the financial gains from selling cover wraps that look like newspaper articles worth it compared to the loss of credibility for newspapers? J-Source looks at how the publisher of the commuter daily Metro, as well as media commentators and political parties view these paid advertisements.

There was something different about the cover of Metro Halifax on Sept. 11. It didn’t look like a typical full-page ad—a common feature in Torstar’s free daily newspaper chain, which has hocked cars, fast food and internet providers. This cover featuring Nova Scotia Premier Darrell Dexter looked like  a news story about the NDP’s popularity on the day after the first leaders’ debate..

“Dexter in tune with today’s families” read the headline on what looked like a news story, while a blue bar under the story claimed that Liberal leader Stephen McNeil “disappoints” and Conservative leader Jamie Baillie “dodges disastrous record.”

Despite how it looked, the piece was not actually a news story—it was a paid advertisement.

Directly underneath this ad was Metro’s actual cover for Sep. 11, with a much less partisan “Suited up for battle” headline over a teaser photo caption on the debate written by the Canadian Press.

The cover of the May 1st edition of Sun Media’s 24 Hrs in Vancouver was similarly enthusiastic about the province’s Liberal party leader, whom it called the “comeback kid.”

Neither party leader was apologetic about the ads or the confusion they may have created.

“As you know, there are lots of TV ads, there’s lots of advertising that all the parties are doing and that’s part of the way we all communicate with the public, and this is part of it,”  Clark told the Canadian Press at the time.

Dexter, a former journalist himself, told a Sun News Network reporter that the cover wrap is a “great tool to use, and of course Metro has specifically designed that product to make it available that way, which is smart of them as well.”

Neither the Nova Scotia NDP nor the B.C. Liberals responded to requests for comment from J-Source.

University of King’s College journalism ethics professor David Swick said this politicized version of the cover wrap “is a more grievous offence than selling toothpaste or a movie or a car, especially during an election campaign.”

“We do have a series of rules we issue to all clients who book a wrap,” said MacDonald. The ad can’t look like an editorial page, or use the same font, he said, and it “can’t appear to be a newspaper article.”

“I would say if you look at the example that ran in Halifax a couple of weeks ago, it was pretty upfront in saying it was a paid advertisement, and [there was a] banner along the bottom—something along the lines of ‘for the NDP’s platform, see the back page,’” he said.

He added that Metro’s readers, “because of their experience over five and a half years in Halifax with the paper, are very knowledgeable about and comfortable with both cover wraps from advertisers in general, and how we handle it.”

“Look at the tiny words—“paid advertisement”—that were in a tiny font, it was surrounded by lots of colour—the big green Metro masthead, a big colour photo of Dexter, a gigantic headline. Your eye wanted to go in 14 directions, and none of them were to the tiny word: ‘advertisement.’”

“So, no doubt, people were confused.”

The front pages of both papers were for sale, and politicians bought them. But are the gains from selling the cover wraps (a 24 Hrs rep said prices start at $8,500 for the space in Vancouver) balanced by the loss of credibility for newspapers? Swick doesn’t think so.

“If the reader thinks that Metro, in an election campaign, is supporting one party, why would anyone read Metro?” he asked.

Carleton University journalism professor Christopher Waddell said newspapers have always tailored products to get advertising from different markets, “but I haven’t seen it done quite like this,” he said.

He said the line between editorial and advertisement has “blurred quite a bit.” Though he acknowledged the “paid advertisement” tag, he noted that “some of the features look more and more like the rest of the newspaper, and they’re increasingly indistinguishable, and everybody’s doing it.”

Waddell pointed to the 2013 State of the Media report by Pew Research Centre—a look at the American media—in which “native ads,” or ads made to look like content, are increasingly being used by major publishers such as Hearst, Time and Condé Nast. “The development, however, runs the risk of confusing readers about the difference between advertising and news content,” the report said. The Atlantic has already backed off its native ad policy after a particularly controversial sponsorship/partnership with the Church of Scientology and a full-cover wrap of Johnny Depp on the cover of the L.A. Times in 2010 raised the ire of the paper’s journalists and journalism experts.

“At some point, I think that risks the newspaper’s credibility to some degree,” said Waddell. He said the increase in cover wraps of this sort could mean that papers like Metro and 24 Hrs may be running out of options.

“It may reflect the fact that they have to rely solely on advertising for revenue, whereas traditional newspapers that have a subscriber base can rely on subscribers to pay some of those costs,” he says. “24 and Metro are given away for free, so there’s no subscriber (to fall back on.)”

But Metro’s MacDonald said that isn’t the case. He said the paper has done cover wraps for 13 years and has always accepted political advertising. He said offering these types of cover wraps are part of a newspaper’s evolution. “Every newspaper is at a different stage in its evolution in this regard.”

Here is some of the public and industry reaction to the NDP ad:

Neal Ozano is the former editor of OpenFile Halifax and has reported for the Halifax Daily News, CBC Radio, Halifax Magazine and numerous other publications.