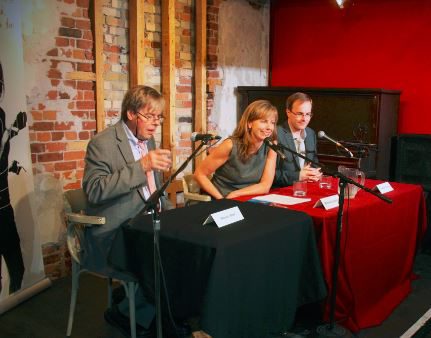 Here are eight key takeaways from the Canadian Journalists Free Expression talk on “Should surveillance scare you?” which addressed everything from why Canadians should care about surveillance to what you can do to protect yourself online.

By Nouran Sedaghat, for the Canadian Journalists for Free Expression

On June 17, Canadian Journalists for Free Expression (CJFE) hosted a panel discussion, “Should Surveillance Scare You?” at the NOW Lounge in Toronto.

The event, which was moderated by Toronto Star national security reporter Michelle Shephard, featured Christopher Parsons, a post-doctoral fellow at the Munk School’s Citizen Lab, in Toronto, with Wesley Wark, a visiting professor at the University of Ottawa’s Graduate School of Public and International Affairs. The panelists lent their voices and views to the emerging debate over issues of surveillance, intelligence and national security in a Canadian context.

Below are eight key takeaways from the conversation, which addressed everything from why Canadians should care about surveillance to what you can do to protect yourself online.

1. Canadians are not necessarily being “stupid” when it comes to sharing information online.

Former Communication Security Establishment Canada (CSEC) Chief John Adams made waves when he stated Canadians are “stupid” when it comes to how much information they post online. However, both Parsons and Wark were adamant that the onus is not completely on the public to ensure that their privacy is being protected.

Parsons noted that there is legislation in Canada that guarantees an individual’s privacy even in the public sphere, and that issues begin to arise when surveillance and government agencies choose to disregard these restrictions on their reach. Meanwhile, Wark asserted that it is up to the developers of applications that make our “digital lives” possible to ensure that they are designed to make protecting one’s privacy straightforward and easy for the average user.

"In Canada, we do enjoy the right of anonymity in public." – @caparsons #CJFE

2. It isn’t just people who have something to hide that should be concerned about privacy.

As a point of discussion, Shephard raised one of the most common arguments made against the need for privacy protection—the claim that such measures are only necessary for those engaged in illicit activities, or those who have something to hide.

"I don't see the pressure on the government here to be engaged. Why are Canadians more complacent?" @shephardm asks #CJFE

Parsons responded with a reminder that having something to hide is not synonymous with illicit or illegal behaviour. As he puts it, mitigating issues surrounding surveillance is about empowering people to live their complicated lives, making allowances for different levels of publicity in different areas.

"Something legal, but that can be looked at in the wrong way can still have serious implications" @caparsons #CJFE

3. Small strides towards protecting Canadians when they use the Internet are being made.

Remarkably, the case of surveillance in Canada is not all doom and gloom. Important developments have recently taken place, and they seem to bode well for the fate of privacy. Most notably, the Supreme Court of Canada ruled last week that any requests made by police to Internet service providers for subscribers’ personal information are unconstitutional unless done with a search warrant. According to Wark, the ruling is significant in that it gives Canadians the rights to secrecy, control and anonymity in regards to their Internet usage.

4) But surveillance agencies, telecommunications companies and the federal government are still pushing the limits of what is acceptable in many instances.

Despite important developments, there remains substantial room for improvement in Canadian surveillance policy. Parsons noted the discrepancy between legality and ethics plagues one element of CSEC’s mandate, specifically to provide technical assistance to federal agencies upon request. Although providing the information is not technically illegal, the opacity with which CSEC collects and uses information has warranted strong criticism from individuals such as the Ontario Information and Privacy Commissioner, Ann Cavoukian.

Parsons also raised the strategic inefficacy of metadata, a term for surveillance data that may be defined as structured elements of data that are easy to collect. Metadata includes everything from who you call to where you go, to which websites you visit, and every piece contributes to building a person’s network of information. However, as Parsons noted, the sheer volume of metadata that a surveillance agency like CSEC collects means that much of it does not get parsed efficiently, such that it cannot effectively serve the purpose of building policy.

On the other hand, Wark noted that intelligence agencies will often use legalese to get around restrictions on their surveillance actions. He cited the example of CSIS, which has a highly classified definition of the term “target,” allowing the agency to technically avoid “targeting Canadians” (generally prohibited by law) in its investigations, even if the agency’s actions fall under the more widely accepted definition of the term. As he stated, agencies such as CSIS and CSEC can work around imprecise and unchanging laws to ensure that their actions are technically permissible.

5. When it comes to the value of surveillance, it’s about striking a balance.

.@shephardm, our favourite devil's advocate, asks what actually would be permissible surveillance #CJFE

The many issues that surround the act of surveillance make it easy to forget that collecting intelligence does serve a purpose beyond the threat to privacy. Wark asserted that surveillance has value as a tool of national security and a means of ensuring a properly functioning system of international relations. He argued that the primary challenge in maintaining these benefits stems from ensuring that the act of surveillance society is congruent with the democratic character of Canadian society.

Wark identified three regulations to surveillance that, if enforced, would assist operating with democratic principles:

Unfortunately, Wark was quick to point out that Canada currently operates in a grey area, significantly lacking any of these elements in its surveillance practices.

6. The way Canadians relate to our government may be significant in explaining our apparent indifference towards privacy and surveillance issues.

The apparent apathy of Canadians towards issues of privacy and surveillance was brought up in CJFE’s 2013-14 Review of Free Expression in Canada and stood as a recurring theme of the evening’s discussion.

Both panelists opined that this may have something to do with the relationship between the average Canadian and the government as an authoritative body. Parsons noted that most Canadians have never experienced a tyrannical government with far-reaching intelligence capabilities and have thus never felt the need to engage in an oppositional relationship with their government. Meanwhile, Wark noted that because the government has never acknowledged the fact that it has a responsibility to be transparent when it comes to issues of privacy and surveillance, the public has never experienced the desire to obtain this information.

Parsons also noted an unexpected drawback of having active privacy advocates in Canada embedded within the government. As he stated, our privacy commissioners will often pick up and build on the work that is done by small advocacy agencies, meaning these organizations hit a wall at a certain point and need to conduct outreach. He argued that this may be a factor in reducing the visibility of advocacy on these issues to the general public, particularly in comparison to larger civil liberties organizations in the U.S. that play a stronger role to overcome the lack of government engagement on these issues.

7. In this vein, Canadians may aim to address government surveillance practices before they address private sector practices.

Wark dichotomized the issues surrounding surveillance into the practices of two major players: private sector, such as telecommunications companies who freely distribute our data, and government agencies, whose acts of surveillance and intrusion threaten to overturn the democratic standard to which we hold our society. In light of this, Wark advised a course of action for any concerned Canadian that prioritizes changing how the government practices surveillance. He noted the market may regulate itself, eventually forcing private sector actors to fulfill a consumer demand for protections, but changing government policy will require a very deliberate push from the concerned public. Moreover, the consequences of government surveillance practices have the potential to be much more damaging to individuals.

8. But using one’s clout as a consumer to alter corporate actions can be just as effective and important.

While Parsons agreed with Wark on the need to effect change at the government level, he also made a convincing case for prioritizing actions that target the private sector. He argued that governments may take a long time before they begin to exhibit any real change, but consumers have the power to put pressure on companies, such as our telecommunications providers, to make changes like improving their privacy policies, encrypting their connections and regulating the use of tracking cookies. While this will not completely debilitate intelligence agencies, it will make it a lot more complicated for them to gather information through traditional means.

How to make companies care about privacy? Make it a financial issue for them. #CJFE

One project that is working to make this possible is Access My Info, released this week by Citizen Lab in partnership with OpenMedia. The tool allows Canadians to rapidly file a request for information from their Canadian telecommunications companies. This is one way to allow individuals to see just how their information is being distributed by private sector actors, what information is being distributed by these corporations and to show these companies that we care about our privacy.

Visit the event live blog for more quotes and highlights from “Should surveillance scare you?”

Nouran Sedaghat is a former CJFE intern and recent graduate of McGill University in Montreal.