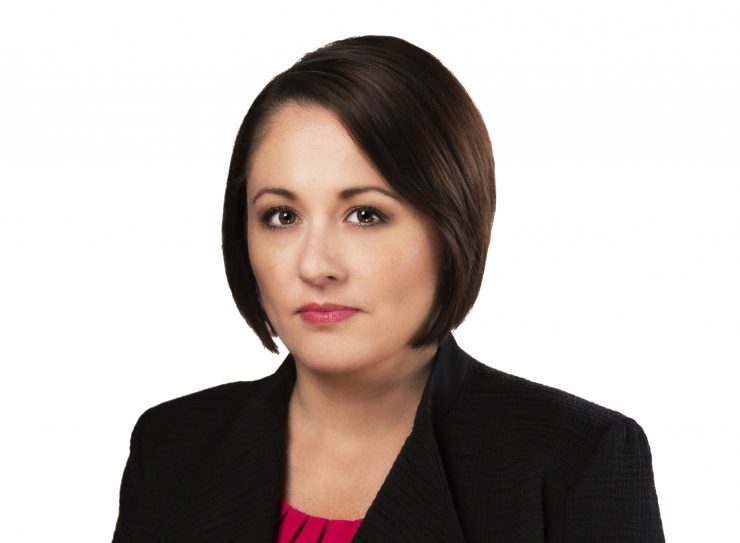 The interim Power & Politics host says not to accept talking points, and to point out when someone is wrong.

Just seven days away from the Canadian federal election, Rosemary Barton is starting another workday—on a holiday, no less. The interim host of CBC’s Power & Politics is doing six shows a week until the campaign ends on Oct. 19.

Promoted after former host Evan Solomon was fired after a Toronto Star investigation revealed he had taken a cut of art deals involving people he met through his work, Barton has become known for challenging politicians on their talking points. In one notable interview that went viral, she called out Minister of Citizenship and Immigration Chris Alexander for claiming the program had never covered the Syrian refugee crisis—despite the fact the show had, many times.

Barton spoke with J-Source on Oct. 12 about how she developed her interview style, challenging top politicians and which issues have driven this election. This interview has been edited and condensed for clarity.

J-Source: When you started your career did you always want to host a major news program?

Rosemary Barton: No—I didn't have a sort of trajectory in mind particularly. I wish I could say that I did.

I actually started in Quebec City as a general reporter, in a posting at the National Assembly. I liked politics, but I didn't think that’s necessarily how my career was going to shape itself.

If you know anything about politics in Quebec, it’s passionate and there’s so much at stake. It’s a great training ground for everywhere else. So I would say that’s where that began for me and then the goals became clearer. I knew that I wanted to go to Ottawa and be a national reporter and work for CBC. Then, you know, things change and opportunities present themselves. I'm very fortunate to be doing it, and I obviously love it now.

J-Source: One of the things you've become known for is challenging politicians on their talking points. Is that something you developed working at the National Assembly or was it something you were doing previously?

RB: No, I think it was there. It’s a tough place to work; it’s a tough training ground. I was one of maybe three women who were in the press gallery at the time, and we were young women. Otherwise it was all older guys who had been around for a long time and knew everything about politics. I was also an Anglophone feasibly working in French. It was harder to get questions in—to try and get English clips—so I had to be certainly more assertive.

I had to be tough and I had to be bold. Then it just became just the way I operated because it made sense to do it that way rather than beating around the bush or just accepting what people said.

J-Source: How do you think journalists can learn to challenge politicians better? Especially for young journalists, sometimes there is a bit of an intimidation factor there.

RB: Sure, and that’s totally normal. I think there are a few things to do. First of all, know what you are talking about so that you are equipped and armed to challenge them. That’s something that is incredibly important, whether you are just in a scrum or whether you're a host of a show and you have producers helping you get information.

Then, don't accept talking points. They are allowed to say those things—that’s OK—but you don't have to accept them as a response. You can push back and ask for more. Sometimes they will give you more and sometimes they won't.

My third thing I think is also effective, particularly doing a TV show, is say when the person has said something wrong, or say when the person has just repeated themselves. I find that when you do that, at the very least you signal to them that you know what game they are playing, and you signal to the viewer that you are well aware of what is unfolding. If all those other things don’t work, then I do that.

J-Source: During your interview with Chris Alexander, what was going through your head, when you heard him saying things and you knew weren’t true?

That was actually quite simple—because it was factually wrong—so all I had to do was call him out on it. What people didn't see was that as it was unfolding, behind the scenes, there were three or four of my producers who started counting through the archives how many times we had actually talked about [Syrian refugees], so that by the time we were in the next commercial break, we had a count. I think it was 30 plus times we had talked about Syrian refugees.

J-Source: On a show-by-show basis, how much research is going into the show and how much are producers fact-checking items as the show airs?

RB: So there are…backgrounds that are prepared for every panel or interview. I'm very lucky to have a really strong, smart team of people here who have good ideas, who know who know the things that I need. I do a lot of reading on my own and calls, talking to people, all that kind of stuff as well.

A producer will sit beside me and we’ll go through what we want to get out of something. Then it’s just a matter of me executing and using the knowledge. That’s one of the benefits of being a political reporter—the longer you do it, the better equipped you are, because you have this institutional memory and you remember how things unfolded and what was said when.

J-Source: One of the issues that has been on-going is the limited media access the Conservative party has given to reporters. Has that been the experience for you and your team, or do you think it has been different this election?

RB: Personally, I've been in Ottawa—I guess its been eight years, nine years—I've only ever known the Conservative government, so for me, it’s probably been less of an issue than it has for people who have experienced previous governments, who were used to maybe more accessibly to cabinet meetings and that kind of thing.

Frankly, the Conservatives have given us lots of people to come on the show and defend their point of view during the election. There’s not a lack of opportunity for them to come on. They are always going to provide someone—sometimes it’s the same person all the time, like Michelle Rempel, but that’s their decision to make.

J-Source: You’ve been doing six shows a week. What happens for you after this election—aside from, I assume, celebrating that it’s over?

I'm still the interim host of the show; the position is supposed to be posted and dealt with after the election. I look forward to trying to keep the job. I do want the job. It’s something that I've loved doing, so I hope that can get resolved and that I can manage to stay in the chair.

I think there will be an adrenaline crash for a lot of us who have been working long, long days—pretty much seven days a week, sleeping with their phones under their pillows, drinking a lot of coffee. I think it will be a moment where it’s going to be hard to sort of downshift and refocus on other things, but it’s been good.