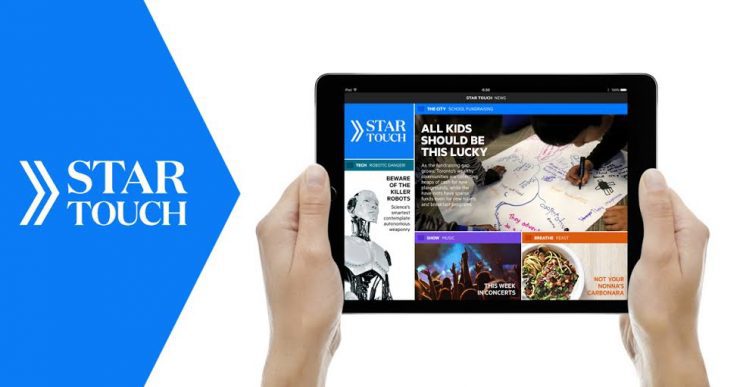 Tablet gives journalists incredible freedom, says Filson, but they have to figure out the best way to tell stories each time.

Jon Filson was working as the sports editor at The Toronto Star for four years when, one day, he was called into a meeting with his two bosses.

“They said, ‘Next week, you are going to Montreal,’” Filson recalled during an interview with J-Source on Oct. 6. He was sent to the La Presse newsroom to learn how they ran their tablet edition. Filson didn’t own a tablet or know anything about them at the time.

But he has since led the development of Star Touch, the Star’s iPad app, which launched Sept. 15.

Eager to discuss the app publicly after working on it for a year, Filson shared with J-Source how Star Touch has changed the newsroom, and why the paper’s reporters and editors now have to think about writing their stories in different ways. This interview has been edited and condensed for clarity.

J-Source: Tell us about how you got tapped to lead the tablet project.

J-Source: So, how big a learning curve was there for you?

JF: It was pretty big over the next year. I basically moved into the La Presse newsroom and spent a ton of time learning about how the app works and understanding their newsroom because it fundamentally operates differently then any other newsroom I’ve ever been in, yet it’s still the same journalism—it’s just a different way of coming at it.

J-Source: What is the difference in writing stories? Is it thinking about the packaging of the story and which different elements will be included in it?

JF: I think it all goes to the point of assignment. Once you start figuring at the assignment point, “OK, we have this kind of story—how does it break down? What is the best way to tell it via tablet?” That changes depending on whatever the story is.

Is the best way to tell a hockey game through what we call a dossier, which has a number of different tabs at the top? That way, we can get in video, and we can get in a columnist and we can get in a game story and a bunch of numbers. If it’s a less important game, can we do that game as a single screen with a numbers package running alongside? And maybe we don’t need video—that kind of thing. You have to consider every story on its own merits, and on how we could deliver, and what the reader would reasonably expect us to be able to deliver.

J-Source: How does that change the structure of the newsroom?

JF: The structure is very similar to a paper. We did have to basically blow up the entire newsroom—we renovated. We hired about 70 young people so that it’s a dramatically different newsroom than it was when we started this process. When you look at it, it does not look physically the same as it did.

J-Source: It sounds like you're really packaging these stories so that they have several different elements. Are you looking at stories like each one is a feature on its own, rather than looking at, “Is this the smaller story for the day, and here’s what’s going to be the front page?”

JF: We still have front-page meetings—that’s definitely part of it. It’s figuring out, again, can we tell the story in six inches? If so then we probably should. Do we have video components? Do we have whatever components are available to us? If we put them on there will people actually look at them?

You’ve got to make a judgement of, “OK, what are people reasonably going to do?” We could put up enough content on any given story that you could spend 20 minutes reading this story. But if that’s not what people want, why would we do that? What we're trying to figure out is how to give people the news that they want at a level that they want.

If you’re at a TV station, you are thinking every time, “I’ve got to have visuals.” Otherwise they don’t really have a good story without visuals. If you are at a newspaper, if I can’t write a big long story then I don’t have a good story; I only have pictures. And if you have pictures, like a photo essay, OK, maybe this should go in a magazine.

But with a tablet, you can use any combination of those and it can all function properly on a tablet. It actually gives you an incredible freedom to tell the story the best way each time and that’s the biggest difference—trying to figure out what that is each time.

J-Source: Are the editors and reporters working on the tablet edition totally separate from the print newsroom?

JF: There are three platforms—the web, the paper and then there is the tablet. What we find is that the web audience wants live news, plus some value added, and the investigative journalism that the Star is known for. Print, of course, demands everything—the investigative journalism as well as the news of the day. And then the tablet, of course, has this very exciting and dynamic experience that we want to make sure that we cater to.

It’s key in all of this that the tablet ends up being an elite product. We didn’t want to end up—and I want to stress this—just putting a newspaper on a tablet. We wanted a product that made sense for the medium. What we found, and what La Presse found, is if you build for the tablet you are able to tip that content into other platforms—you're not necessarily able to do it the other way. It’s very hard to turn newspaper into tablet but it’s comparatively easy to turn tablet into newspaper.

J-Source: So then content is going on the tablet first and then going over to the print side?

JF: They come out the same time. The tablet actually holds substantially more—about 15 per cent more—on a daily basis. It can hold more print content and actually holds video and audio—that kind of thing. More slideshows, more pictures. So it shows. It’s actually a deeper product.

Early on in the process one of the things I had to do was take one of our papers and try to slot it into the tablet and see if it would work. I literally had to count every element that we created in the paper and then counted every element La Presse did in one of their editions and put them side by side. That’s the level of work that we did.

J-Source: And that’s how you figured it was a 15 per cent difference?

JF: Yup. It can swing, but generally every day, that was about the gap.

J-Source: Are there any plans to expand it to other tablets or to have a smartphone version of it?

The goal will be to have it on Android by the end of the year. Phone is sort of a long-term thing that we are working on with La Presse right now. We think that the market is tablet and so we're focusing on driving that.