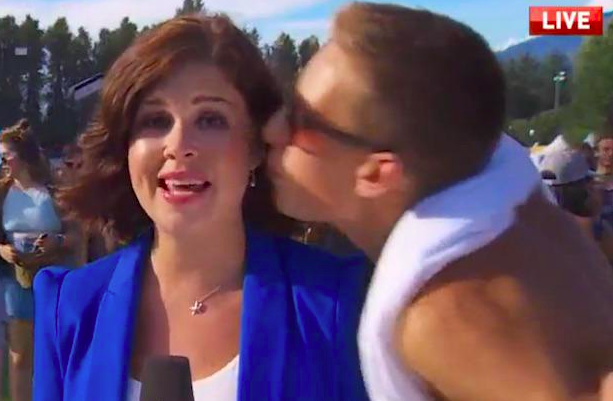 RCMP investigating after CBC reporter kissed by stranger on camera

CBC reporter Megan Batchelor was covering a music festival in Squamish, B.C., north of Vancouver, on Friday when a man kissed her on the cheek and took a selfie.

Another television reporter doing a live report received a jarring distraction when a man kissed her on the cheek.

CBC reporter Megan Batchelor was covering a music festival in Squamish, north of Vancouver, on Friday when the incident happened.

She was doing a live hit for the network’s 6 p.m. newscast when video the network aired shows the man came up from behind, kissed her on the cheek and took a selfie.

The CBC quotes Batchelor as saying she was “rattled” by the encounter and felt like the unidentified man was trying to interfere with her ability to do her job.

The CBC is reporting that a complaint has been filed to the RCMP and the network is asking anyone who knows the identity of the man to contact police.

There have been a number of incidents recently where female television reporters have been the subject of abuse from people passing by.

An employee with the Ontario electrical utility Hydro One was let go earlier this year after he shouted crude remarks to a Toronto reporter who works for Citytv.

This article is reprinted with permission from The Canadian Press.