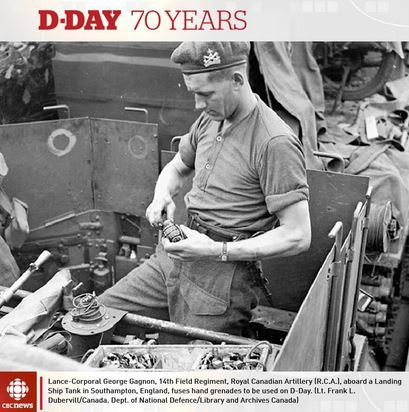 If World War II had happened in a multimedia era, this is how CBC News would have covered it.

Imagine if you could go back to a pivotal moment in history and cover it with the technology of today. That is the concept behind CBC’s ambitious project D-Day Live, which will be rolled out June 5 and June 6 to mark the 70th anniversary of Allied troops landing in Normandy.

“Covering historical events can be a bit of a head-scratcher for journalists,” said Michael Gruzuk, executive producer of CBC News Specials and Programs. “The challenge is how do you bring something new to something old?”

While many media outlets have experimented with writing contextual analytical pieces and live tweeting the events, CBC decided to take the project one step further and integrate its coverage into all its platforms—TV, radio, online and social media.

“If World War II had happened in a multimedia era, this is how we would have covered it,” Gruzuk said. “Normally we would hire a researcher to put together a package to get all our journalists up to speed on this special project,” Gruzuk said. “The nice thing of putting together this real-time coverage is that we’re doing both at the same time … prepping everyone and doing this new special project.”

The project, which took about two months to develop, involved CBC journalists searching through the public broadcaster’s archives and creating news bulletins that would go out in real-time.

For example, on June 6, 1944 at 8 am, Prime Minister William Lyon Mackenzie King addressed the nation. That same broadcast will be again aired by CBC Radio and Television on June 6 at the same time.