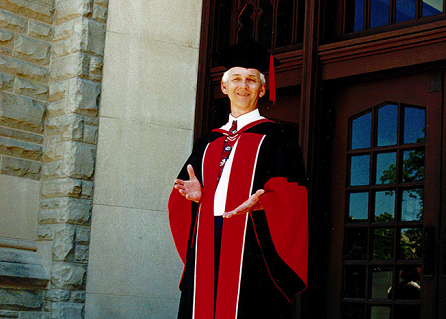 David Spencer, a founding professor in the Faculty of Information and Media Studies at University of Western, in London,  Ont., was an inspiring teacher, scholar, mentor and friend.

But David was also a prodigious teller of tales. His passion for stories—both spinning them and listening to them—permeated every aspect of his life.

His kindness and support for faculty members is legendary, and everyone who works in FIMS at Western has a memory to share.

John Reed, an instructor in the media studies program, once complained to David about the challenges of teaching in one of Western’s enormous lecture halls, known as NCB 101.

“David described teaching at another university in a similarly large auditorium,” Reed said.  “At one point during his lecture, a student walked to the back of the room and removed a hot plate and began frying a pork chop.  I asked him how he reacted to such a spectacle, and he said that he just kept on lecturing, as the smell of the food slowly filled the auditorium, and the sizzle competed with his voice for attention of the students.

“Whenever I have a tough day teaching, I think to myself, ‘At least nobody pan-fried meat today,’” Reed chuckled.

David was always at the centre of odd goings-on, and while sometimes these absurd events seemingly happened to him, in other instances, he was clearly the instigator of the fun.

And his students loved this about him.

Chris Clark, now a part-time instructor in FIMS, wrote his thesis in the early 1990s under David’s patient tutelage.

David was twice nominated for the prestigious Bank of Nova Scotia Teaching Award, but what stood out for Clark was the person beyond the classroom.

“As the end of our school year approached, our group of 42 students planned a trip to Tiger Stadium to see a baseball game,” Clark recalled.  “Many of the international students had never been to a game and didn't know a home run from a hot dog. Because none of us had any money, we rented the cheapest possible bus for the two-hour trip.”

“David was one of the first people to sign up for the day, and he showed up early with a knapsack full of provisions. And he was a serious baseball fan by all appearances. When the old, yellow school bus came rumbling onto the circular drive at Middlesex College, David looked at me—I had booked the bus—and made the first of several jokes he would make about the bus: its lack of comfortable seating and its lack of a washroom.

“Notwithstanding the second-rate transportation, he climbed aboard and happily sat up front, acting as tour guide for those unfamiliar with the border, and Detroit and Tiger Stadium itself. That’s how I will always remember David: entertaining us from his perch up front.”

In one way or another, David was always somewhere up front telling stories.

He held a PhD in history and philosophy from the University of Toronto where he wrote about the struggles of early Canadian working-class journalists, but his first career was as a radio reporter. He graduated in 1962 from the Radio and TV Arts program at what was then Ryerson Polytechnic Institute and spent the next decade as an announcer, producer and production manager at CJAD-CJFM, in Montreal, and at CKFM, in Toronto.

In 1972, he refocused his own telling of tales to teaching others the craft as he joined the broadcast program at Humber College. Fifteen years later, he became a faculty member in the graduate school of journalism at Western, where he later served as both associate and acting dean. After the Schools of Journalism and Information and Library Science merged with the Faculty of Continuing Education to form FIMS, David taught in the undergraduate and graduate media studies programs, as well as in the Master of Arts in Journalism program.

Michael Nolan, a retired Western journalism professor, noted that David shouldered more than his share of responsibility and that he fought hard for the well-being of his colleagues, his students and his profession when the merger threatened to obscure journalism’s existence.

“He stepped into the breach when no one else did, and he did this at a time when it was very difficult, and the structure of the journalism program was changing. He did a very good job and worked right to the end, and he was like that about everything he took on, his teaching and his scholarship. David always went right to end.”

In wider academic circles, David was a well-known and highly respected journalism historian, who published scores of articles and reviews in addition to his books: The Yellow Journalism and the Rise of America as a World Power (2007); Transit Progress Derailed, Adam Beck and the Radical Railroad Controversy: A Study in Politics (2012); and Drawing Borders, A Cartoon History of Canadian/American Relations in the Gilded Age (2013).

But his scholarly pursuits were neither dry nor divorced from his everyday exchanges. “David excelled at uncovering great stories about past historical figures or events and then being able to resurrect those accounts on a second's notice while in conversation—with just about anyone,” noted Daniel Robinson, an associate professor in FIMS.

Many of David’s colleagues commented about his amusing wit and outstandingly affable nature.

“As with so many of us, David was a mentor and friend, one of the first people to welcome me to FIMS and a regular visitor to which ever office I was occupying,” said Susan Knabe, associate dean, undergraduate.

“I loved that he was always up for a chat, had a story or pithy observation to share, especially about his struggles with OWL [an online teaching website]. His last email to me was, ‘I am officially firing OWL’ and went on to refer to it as digital junk. I appreciated his slightly courtly manner, and the fact that when I spoke with him, I could see so clearly—because it was always there, he radiated it—a man who loved his craft and who had lived Canadian journalism.”

Because of his outstanding teaching, publishing and service record, David was promoted to full professor in 2002.

Dean of FIMS Thomas Carmichael called David “the soul of collegiality” and sees this as his defining legacy. “He was compassionate toward all, welcoming to new faculty, supportive of his junior colleagues, encouraging when it was needed, and all of that he conveyed with a wise, comic appreciation of the slings, arrows and ironies of everyday life in academia. He was a scholar, but he was also an instructor, one who was utterly committed to his students and to the knowledge that he brought to them.”

Carmichael added that David’s unique contribution to scholarship was perhaps his dedication to the history of print journalism in the later 19th and early 20th centuries in North America.  He served as head of the history division of the Association for Education in Journalism and Mass Communications, the largest journalism education organization in North America, and as the president of the American Journalism Historians Association.

“He was an internationally respected journalism historian, and one who was much beloved by colleagues across North America,” said Carmichael.

Here in Canada, David was “an enthusiastic participant in the invention of J-Source,” said Ivor Shapiro, a founding member of the site and chair of the school of journalism at Ryerson University. “I remember him always saying something witty and helpful in the sometimes delicate negotiations around an unprecedented collaboration and being very flexible in the negotiations to establish the project.”

He also became J-Source's first books editor and served in that role for several years.

While David’s own story has come to an end, tales about his kindness, support, collegiality and good humour will continue to be told and enjoyed by all whose lives he touched.

FIMS plans to plant a tree in his honour when its new campus building is opened in 2017.

[[{“fid”:”5620″,”view_mode”:”default”,”fields”:{“format”:”default”,”field_file_image_alt_text[und][0][value]”:””,”field_file_image_title_text[und][0][value]”:””},”type”:”media”,”link_text”:null,”attributes”:{“height”:157,”width”:150,”style”:”width: 100px; height: 105px; margin-left: 5px; margin-right: 5px; float: left;”,”class”:”media-element file-default”}}]]Romayne Smith Fullerton is an associate professor in the Faculty of Information and Media Studies at the University of Western Ontario and the ethics editor for J-Source. She is an interdisciplinary scholar whose research interests and publication list broadly encompass gender, minority issues, and journalism ethics. She is the co-editor of Covering Canadian Crime: What Journalists Should Know and the Public Should Question, forthcoming with the University of Toronto Press in the spring of 2016.