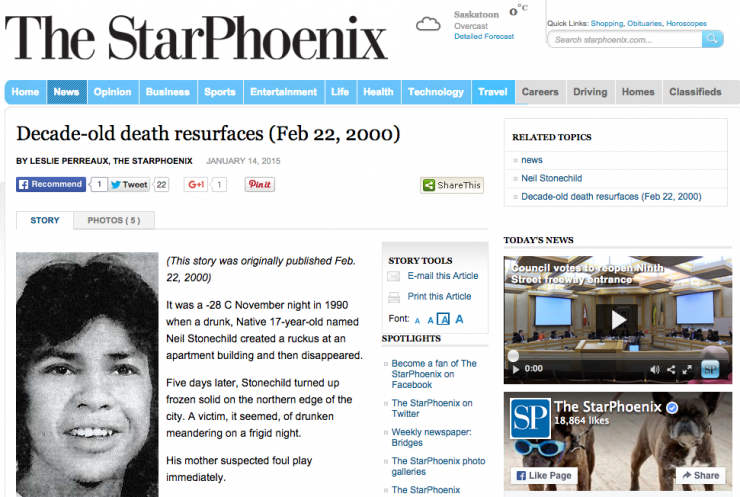 Former StarPhoenix reporter on the importance of making difficult calls and rigorous reporting.

This week marks 11 years since an inquiry into the freezing death of Neil Stonechild was released to the public. Stonechild’s story garnered national attention thanks to a 1,256-word, front-page story in the StarPhoenix, “Decade-old death resurfaces,” by Les Perreaux, which forced the RCMP to include the Aboriginal teen’s death in their investigation of racism in the Saskatoon police force.

Perreaux, now a national correspondent for the Globe and Mail, reflected on what it was like covering a simmering issue fuelled by negligence, anger and mistrust. This interview has been edited and condensed for clarity.

J-Source: Your first coverage of Saskatoon’s freezing deaths was your Feb. 22, 2000, article about Neil Stonechild’s 1990 freezing death. How did you get thrown at that one?

Les Perreaux:[Colleague Dan Zakreski] had been covering the case of Darrell Night, who was the guy who got dumped off and survived. [Dan] had run his feet off chasing a few other suspicious cases. I thought a simple thing I could do would be just search the archives.

This is one of the things that’s changed at a lot of papers. There used to be the attitude that the newspaper was the newspaper of record, right? Any kind of suspicious death where a body was found in public would at least get a brief treatment.

From that habit, I concluded there’d be a record of it; if bodies were being found outside of town for mysterious reasons, it might just be a brief, but there’d be some record of it, especially at that time. So I headed to the library. Back then it was like scrapbooks, organized by subject and author.

The first step was hitting a brief about a body found in a vacant lot in the north end of town. I went back and kept looking, in case there was any follow-up. Sure enough there was quite an extensive story done by Terry Craig [on March 4, 1991]. He basically just spoke to the mother and she had expressed her doubts that this boy died in that field for no reason. That was obviously a huge find, because that gave me the template for what had to happen next.

J-Source: What was your first thought when you found Terry’s article?

LP: Well, my heart just about jumped out of my chest, honestly.

Minutes later, I managed to track down a number for her in the phonebook. I picked up the phone, and the first words out of her mouth when I introduced myself were, “I’ve been waiting for you to call, I’ve been expecting you.”

It’s quite remarkable, too, the courage she had. She passed me on the name of someone who became very important, Jason Roy.

LP: Yes. This is all happening that day, right? I’m in day two of my archive search. I found the thing sort of mid-morning. Phoned her. She gives me a half-hour interview, gives me Jason’s name. I phone him; he answers immediately and wants to meet at the Confederation Mall. That afternoon, I’m having coffee with this guy who told me this story that sort of provoked the inquiry and the firing of these [police] officers and everything that came afterwards.

J-Source: Before the article ran, what was the hardest part of putting it together?

LP: Phoning Stella and not being sure of where she was at with it. One of the hardest parts of this job is having to bother grieving mothers and [family]. You often fear that they’ve put it behind them and you’re going to cause them pain by drudging it up again.

But this is one of those cases that illustrated why we do it, right? Because for the nine times you call them and they’re bothered, there’s one time where the person not only wants to talk, but they have vital information that needs to be shared with the public.

This is an extraordinary case with the results of those two phone calls to Stella and to Jason, the public pressure, the whole Starlight Tour thing. It’s very rare that a story has consequences that range that far, including two officers being convicted and four them being fired. It overhauled the police force and the public inquiry. That’s not stuff that happens every day. This is why you have to make those difficult calls on stories like this.

J-Source: After your piece ran, the RCMP announced they were going to investigate Stonechild’s death. Did you expect that to happen?

LP: I expected that they would take it up.  I think the story caught them off guard, frankly. I don’t think anybody warned them it was coming, and I don’t think they had any inkling that this case would land on their plates.

There was a whole atmosphere around that time where the Saskatoon Police Service was absolutely refusing to confront errors they made and possible misconduct by their officers. They were not interested in examining their own behaviour, not at all.

These allegations of wrongdoing surface and the police force play dumb, they play innocent … they refused to even look at it, to even examine their own behaviour.

I fully expected from my coverage of the David Milgaard case that the RCMP was going to end up investigating it, because there was no way at that time the Saskatoon Police was even going to consider looking at it.

J-Source: We do journalism to force public scrutiny. What did it mean to you when it was announced the RCMP would be investigating Stonechild’s death?

LP: I was excited. Coming on the heels of what happened with Milgaard … this is why I got into this business: to force accountability on figures of authority.

But at the time, I sort of expected this would be a regular thing. I realize now, all these years later, these sorts of stories don’t come along all the time. That sort of clear exposure of official intransigence and misconduct and using the press to force officials to do their jobs doesn’t always work out that way.

I look back on it and still consider it one of the most important things I’ve done.

J-Source: When you think about covering Saskatoon’s freezing deaths, how did that influence you when you moved on to the Canadian Press and now at the Globe?

The other thing is the importance of rigour. Make sure you’ve given a proper accounting of what you know and you have things confirmed.

The police force back then accused us of trying to cause a race war. It was tense and people were afraid. People in Saskatoon didn’t like hearing about this. The relationship between Aboriginals and the community, especially in western cities, is difficult. So there were a lot of people who were skeptical that didn’t want to hear it. There was a lot of victim blaming you heard in ordinary conversations.

Correction: An earlier version of the article misspelled Les Perreaux's name. We apologize for the error.