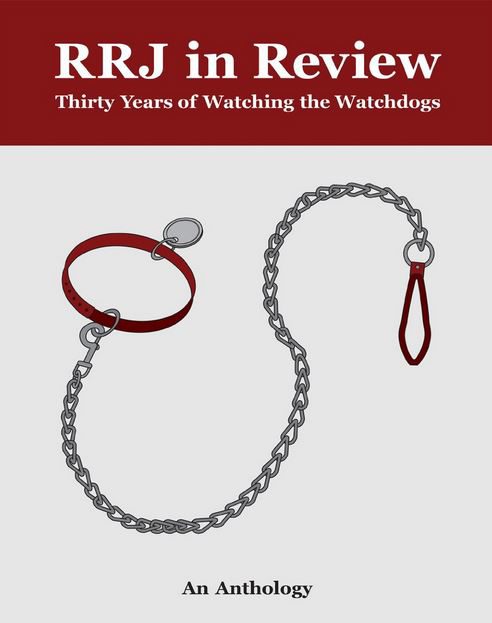 Ryerson Review of Journalism has put together an ebook to celebrate 30 years of publishing, featuring some of the magazine’s best work from across the decades.

The Ryerson Review of Journalism has put together an ebook to celebrate 30 years of publishing, featuring some of the magazine’s best work from across the decades. Produced by final-year journalism students in the masthead class at Ryerson University, in Toronto, the RRJ takes a critical look at the journalism industry in Canada.

The anthology was spearheaded by final-year student Shannon Clarke and was the brainchild of Tim Falconer, this year’s RRJ instructor. The RRJ’s current masthead class went through more than 50 back issues looking for stories to include.

“We’ve been watching the watchdogs for so many years … that’s why we wanted a cover that represented that, so we have a dog collar,” Clarke told J-Source.

Clarke said the students wanted the anthology to be representative of all the decades in which it has been published and cover all parts of the country and all kinds of media—television, radio, print and online. Each article also features a new introduction from the writer about the process of getting that story and includes anecdotes, such as why the subject is still a relevant issue or how things have changed since.

“We thought finding the material to include in the ebook would be the easiest part,” Clarke said, “but it took the most time because there were so many great options to choose from… it was literally the hardest part.”

The anthology can be purchased at Amazon for $4.99. Clarke said the masthead class didn’t have a specific sales goal in mind. “Really, we just wanted to put it out there,” she said.