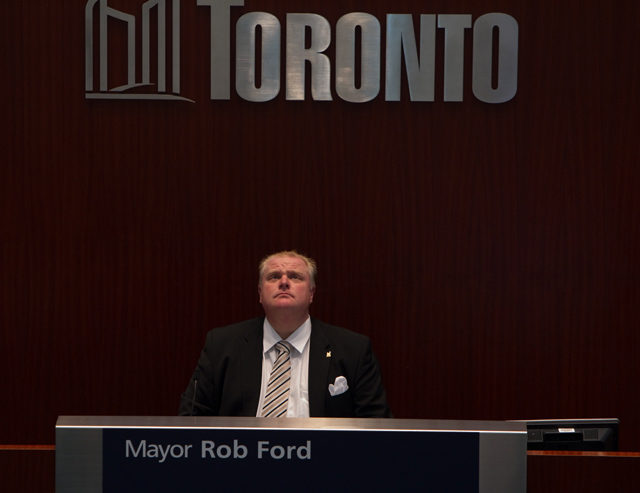 Simply reporting, or reporting simply? How do you cover Rob Ford’s lies?

If you just report what a politician says, you get called nothing more than a lackey or a mindless stenographer. Report on whether the politician got the facts right, and you’ll likely be called a biased, partisan hack. Here, Torontoist editor-in-chief Hamutal Dotan explains why her news outlet fact-checked the mayor.

If you just report what a politician says, you get called nothing more than a lackey or a mindless stenographer. Report on whether the politician got the facts right, and you’ll likely be called a biased, partisan hack. Here, Torontoist editor-in-chief Hamutal Dotan explains why her news outlet fact-checked the mayor.

There are many ways to try to come at truth in political journalism, but here are two of the most basic. You go to an event, transcribe a politician's remarks and capture the atmosphere in the room. That can be a story. Or, you can do some research and compare the politician’s economic projections with ones from the relevant major institutions and note any significant discrepancies. That can be a story, too.

If you just report what a politician said, you open yourself up to being called a lackey or a mindless stenographer. If you report on whether the politician got the facts right, you’ll likely be called a biased, partisan hack.

Which brings us to the question: how do you cover Rob Ford?

Most day-to-day political coverage melds the approaches mentioned above: stories include some elements of a straight recap as well as an attempt to assess the veracity of a statement, generally by gathering some opposing opinions. There's a pitfall here too, of course: a commitment to fairness and balance is supposed to mean we give all sides in a political debate inches and airtime, but not all sides have equally logical points of view.

The appearance of fairness—ensuring everyone gets a quote in—often masks substantial differences in how nuanced and reliable competing viewpoints may be. (Do you stop quoting climate change deniers because their view is so out of step with science or keep including them because they articulate a view held by a significant percentage of the population? If you include them, do you also include a disclaimer pointing out the near-universal scientific consensus on the issue? At what point, if any, are you demonstrating bias in making these choices?)

Most day-to-day political coverage, at least in Canada, also assumes that while politicians may exaggerate and prevaricate, choose their facts selectively and try to claim credit for others' achievements, there is at least some rudimentary correlation between what they say and what everyone else knows to be true. Politicians stretch the truth into convenient shapes, but they don't smash it to bits.

The Ford question, put another way: if Rob Ford lies so often and so thoroughly that his most basic descriptions of how government and economics work are just wrong, and you keep reporting what he says without making this explicit, does your stenography become partisan in the process of repeating that misinformation?

Is there a point at which reporting—accurately—on what a politician says makes you complicit in his political games, because what he says is so clearly misleading?

A few days after Ford filed his papers to run for re-election, he gave his first major campaign speech, to the Economic Club of Canada. He rarely speaks at any length, which made it a valuable opportunity to learn how he thinks Toronto is doing, broadly speaking. And in that speech, he lied. He lied often. And he unequivocally lied: un-Canadian and impolite though it may be to say so, there is no other reasonable way to characterize his comments.

Two days after his speech, Torontoist published an analysis of his remarks. It was called "On Thursday at the Economic Club, Rob Ford Lied Several Times Every Minute."

Some representative examples: Ford said his government had "found over $750 million in 'efficiency savings'" (Toronto's top civil servant, who oversees the budget, has said it's half that); that his term had been without a single day of labour disruption (library workers went on strike in 2012); that planned debt is being reduced (official budget documents show it is increasing); that "we are moving ahead with the first major subway expansion in decades" (a new line opened in 2002, and another extension is currently under construction).

On the face of it, it doesn't seem like much—the usual exaggerations you could find in any stump speech delivered by any politician. (We will be doing similar analyses of other mayoral candidates' speeches as they register to run.) But the sheer volume was extraordinary.

It felt disingenuous simply to recap his remarks without pointing this out. And there was no way to generalize, to try to capture some overall way in which he misrepresented things, without minimizing the speech's problems—the frequency and variety of errors were too great.

So we decided to point out the instances in which Ford departed in some way from independently verifiable information, sentence by sentence. Some were clear lies, and some were misrepresentations—those more typical cases where certain facts were conveniently omitted or credit was claimed for a predecessor's work. We noted each one, citing the countervailing evidence.

Were we editorializing? That's a perfectly reasonable description. We weren't just giving a recap of the speech, to be sure, nor citing other people's reactions, but including our assessment of its failings.

The problem is, if we had just given a recap without pointing out all those failings, we would have been inserting ourselves into the story in a different way. This wasn't a matter of needing to dig to find the errors, of deciding to pursue that angle on the story. Our previous City Hall coverage had already shown that much of what Ford said was wrong.

If we hadn't pointed out the failings, it would have been an instance of deliberately chosen, willful blindness—a different kind of editorializing.

This, again and again, is the Ford question: are you failing your audience in simply reporting—in reporting simply—on what he says?

Hamutal Dotan is the editor-in-chief of Torontoist.com. She studied at U of T, but didn’t realize how much Toronto was part of her until she left to live in other cities. Having returned after grad school Dotan began writing about everything from architecture to farmers’ markets, which makes her either a Renaissance woman or a dilettante, depending on your point of view. She is also the City Hall commenter for CBC Radio’s Metro Morning.