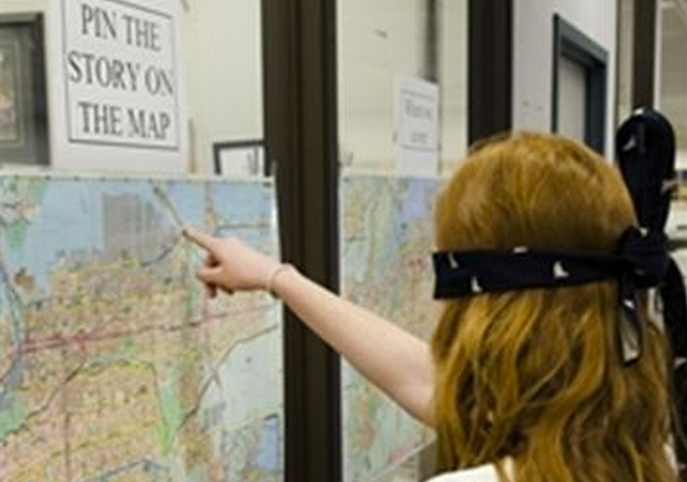 Spec on the Spot: Newspaper takes reporting back to the basics

Hamilton Spectator assignment editor Nicole MacIntyre wanted to give her reporters a chance to explore their city. So, she asked them to choose a spot on a city map blindfolded and off they went. The mission: find a newsworthy story within a one-kilometre radius.

By Eric Mark Do

Imagine a slow summer news day and your assignment editor asks you to write something — anything to fill the page. It’s the dreaded streeter assignment. And yet it’s exactly the back-to-basics reporting that is earning the Hamilton Spectator kudos from its readers.

Its reporters have been literally blindfolded before choosing a spot on a map where they then go to find and write a story for the day.

It's a new twist on an old concept: “that the best stories come from reporters being curious in the community, just looking around,” said assignment editor Nicole MacIntyre of the project that has been running since July. MacIntyre came up with the idea for Spec on the Spot — modelled after an assignment she had as a Toronto Star intern — on one of those typically slow news days.

She isn't afraid to call the project a gimmick but says it's getting positive reactions from readers. When the location is tweeted out  people can respond with story suggestions. While articles have to be written for the paper's city or business section, reporters are free to choose the format – profile, hard news, etc.

So far, the initiative has reached far-flung places across Hamilton. One reporter even ended up picking a spot in the middle of the harbour. Since one of the rules requires stories to be within a one-kilometre radius of the chosen location, MacIntyre told the reporter to rent a boat or kayak and to wear a lifejacket.

The project also gives Spectator journalists a chance to explore potentially unfamiliar territory. For Teri Pecoskie, that was Greensville — a fairly rural side of town that she says she hadn't been to before. Pecoskie found a couple of possible stories before deciding to write about an ambulance base being added to the local fire department building.

“I kind of got lucky,” she said, “because the old fire chief actually lives right behind where the fire station and EMS station is.” Pecoskie interviewed him and found out the ambulance base addition was needed to help cut down on EMS response times, so there was a bigger story to be told than just a building extension. MacIntyre said this story would not have been normally covered by the Spectator, but is really important for the Greensville community.

Not all stories are strictly hard news. Reporter Molly Hayes went to Van Wagner's Beach on the city's east end and said she saw a “weird wooden sculpture” but didn't think much of it since she didn't know where it came from. Hayes got back in her car and drove down the road to keep looking for a story when she saw a man huddled over a tree stump.

“I literally U-turned in the road thinking, 'Hey, maybe that's the guy that made that first one.'” It turned out he was. Hayes' profile of the sculptor ended up on the front page of the newspaper.

MacIntyre said having reporters knocking on doors and stopping complete strangers is “a good reminder to us that the best stories come from out in the community, from regular people, not from communications people and press releases.”

While Spec reporters agreed and welcomed the change from the daily routine, there was initial skepticism among the ranks. “I thought it was nuts,” said Hayes, who was also the first to participate. She said she and a couple of other reporters jokingly compared the project to a j-school streeter assignment, “which is everybody's nightmare.” But Hayes also said that for a rookie reporter like herself, “you can never have too many lessons on how to re-orient yourself with your city.”

“There's nothing groundbreaking about going out into the city and finding news,” she said, “but that's what's so neat about it, that we need to remember that that's how this is done.”

Pecoskie agreed, saying it's unfortunate that “it seems sort of novel in a modern newsroom, but it's something we should be doing all the time.”

Spec on the Spot is slated to finish once the summer is over, but MacIntyre said that could be reassessed considering the “great reviews” and stories that have come from it. She added it may not continue with the same concept, but that it might just be a lesson for her as an assignment editor “to build in time so that the reporters can just go out in the community and walk around.”