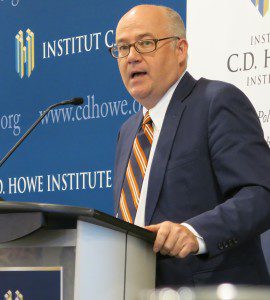 “The Canadian broadcasting system is an act of political will.”

In the past year, the most paralyzing and unnecessary cuts ever imposed on the CBC/Radio-Canada have moved a growing number of Canadians to share their outrage publicly.

You’ve seen more headlines and news stories about the future, value and funding of CBC, as well as increased political discussion, including urging from the Federal Liberals, NDP and Greens to stop the cuts, increase funding and change the way the CBC board of directors is appointed.

Many believe such an overdue structural change would stop any Prime Minister from arbitrarily appointing known party supporters to the board that runs the CBC. Currently almost all of the CBC board of directors are known to have donated money to the Conservative party.

This potential for political interference and subsequent corrosive impact on Canada’s largest news organization has led to outraged op-eds, and letters to the editor.

It has also led to a recent panel at the C.D. Howe Institute, where the merits of public broadcasting and protecting broadcast and online space for the public interest was debated.

Media lawyer and advocate Peter Miller lamented the loss of production ability arguing that given that private networks are less and less able to deliver public good programming, CBC is more important than ever. For Miller, “If we believe in a country called Canada, we need to believe in a public space and media for Canada.” He also made the case for increased regulation to ensure public and private space for Canada online saying we must grapple with the Internet and look at what regulatory tools we can use while promoting and funding Canadian programming.

Longtime broadcaster, and former CBC executive news producer Tony Burman, also a panelist at the debate, lamented the stranglehold American programming has on Canada. He said “Canadian stories are smothered at birth, so how do we get access to Canadian content in a rigged system.” Burman urged Canadians to remember that every developed country has strong protection of domestic content, including the UK, and Germany which have “very aggressive protection for public systems. If we don’t support and fund local programming, all the money is going to the U.S., is that what we want?”

Miller argued that the answer is not to exclude U.S. programming but to promote Canadian programming, pointing out something anyone working in media knows only too well: “local programming and diverse voices in our communities are increasingly at risk,  and the impact of that includes a diminished ability for young people to find work in this industry.”

These are major issues for those of us who know the immense value of vibrant media in Canada. If you are also proud of Canada’s unique ability to share our own stories and values, why not share your opinion with us and with everyone else. Let’s keep the conversation going in this election year.

Read Peter Miller’s insightful remarks below and see the full video of the debate.

Thanks Anne, and thanks for having me. I don’t usually speak before such august audiences and I don’t usually dress like this. I actually do a lot of work in the digital media space so I am usually in shorts or jeans, and sometimes a seersucker jacket. I decided not to inflict that on you. I am wearing by the way an orange tie in honour of an incoming Mulcair government.

So why am I here?

I have never worked for the CBC; I spent my career in private broadcasting. I’m an engineer and I am a lawyer. I am not sure why I am on this side of the debate with Tony [Burman], but I am.

And I am for three reasons that I want to talk about. They sort of underline in my view the answer to the debate question.

So why is that?

That’s because the Canadian broadcasting system has always been a mixed  public and private system, and the genius of that system is that you had the public side, the CBC over there, and then you had the private side that was regulated. And the quid-pro-quo for the private side was that in return for market protection and various other benefits, private broadcasters delivered certain public space qualities, be it local news, or drama other things—certainly far more than they would otherwise be able to do without regulation or the protection of regulation.

Well it’s no surprise to say that that’s breaking down.

So that part of it, that private side, is going to be less able to deliver the public good going forward than it has in the past. So even if we do nothing to CBC, just relatively speaking, it becomes more important.

Third point—and this is a point about subsidy versus regulation. Subsidy is important. Subsidy is what supports the CBC through the parliamentary appropriation, subsidy supports Canadian drama through something called the Canadian Media Fund and through various tax credits. Subsidy is very important.

But subsidy is not the major driver of the Canadian broadcasting system.

The major driver of the Canadian broadcasting system in terms of the good that it delivers back is through regulation. So the big question is what happens with regulation going forward?

This third point, all of you instinctively are going to disagree with, but I am going to say it anyway. And that is: We have to grapple with the Internet. We have to grapple with whether there are certain regulatory tools we should start to employ. Not old-style regulation where you deny Canadians access to content, but new-style regulation where you create a climate that promotes Canadian programming and funds Canadian programming.

And as shocking as that sounds, in case you haven’t noticed, the Internet actually is regulated.

The Harper government in its Digital Strategy that was announced last year had a list of about 15 things dealing with privacy, and protection of minors against child pornography and various other measures that are regulation of the Internet.

So the issue is not whether we regulate the Internet or not. It’s whether we choose to regulate it, also, for the purpose of a public media space and media broadcasting.

And I close—and I warned Andrew [Coyne] I was going to do this, with a comment he made recently where he quoted Kim Campbell’s maxim that an election is no time to talk public policy, and Andrew in his article suggested that seeing as we have interminable campaigns that’s no longer true. I actually think on this issue I hope he is right, because we need this debate.  It’s an important one. And I think for those of us that believe in a country called Canada, you need to believe in a public space and media for Canada.

This article originally appeared on the Canadian Media Guild’s website, and is reprinted here with permission.