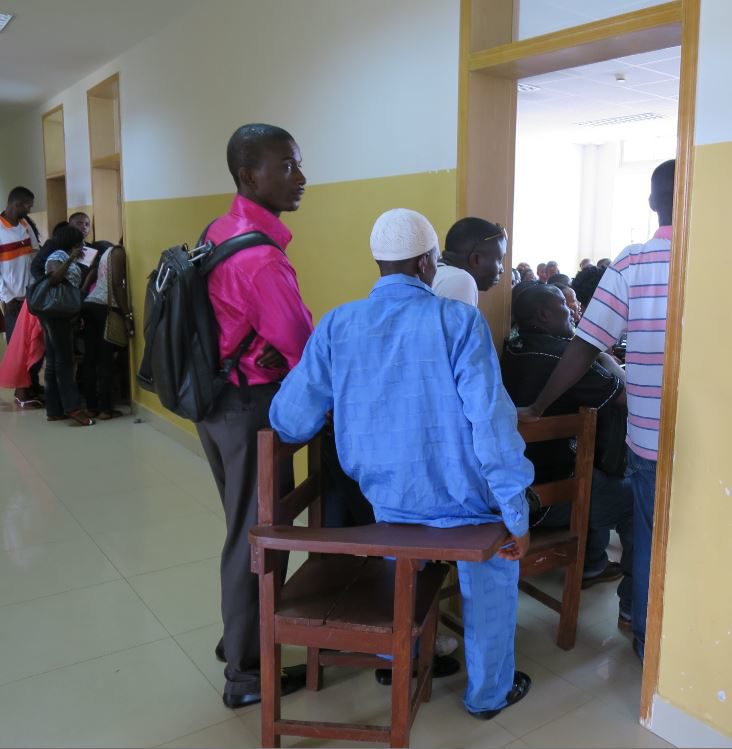 The challenges of teaching journalism in Liberia

With classes so full that students spill out in the hallways and equipment that’s constantly breaking, teaching journalism in Liberia is not easy, says Janice Neil, who went to the West African country on a Journalists for Human Rights trip.

I’ve been fortunate to have enthusiastic students fill my journalism classrooms but never have I had students who were so keen to listen to lectures they spilled out into the hallway.

That’s what I encountered the first week when I arrived this past fall at the University of Liberia (UL). The 600 or so students in their four-year BA program seemed so hungry for a journalism education that classes and sections were overbooked, and yet the ones who don’t get the desks didn’t slink away; they packed the hallways, squeezing into the doorway to catch the lecture. (According to the Liberian Daily Observer, the university has indefinitely suspended classes.)

And at first blush, it’s no wonder: Liberia, a tiny West African country, has had peace for just a decade after 17 years of civil wars and has an extremely lively news media industry.

At least 15 newspapers are published in the capital city of Monrovia, which also has about the same number of radio stations plus five local TV stations. All for a city of just over one million people in a country of four million.

The university administration solved the overcrowding problem by adding extra sections, but the situation demonstrated both the enormous appetite Liberian students have to consume news and the challenges they face learning about it. I spent a month at the UL this past fall as a pilot project of Journalists for Human Rights and Ryerson University, because the UL wants to know how it can stride into the future and become more confident in delivering a journalism education that prepares students for a globalized world.

What felt familiar was the day I watched as students in the Fundamentals of News Writing and Reporting class had a lively discussion about the ethics of reporting on information they learned in confidence. I was 8,000 km away from my own journalism classes but I was in my comfort zone. The hypothetical case study—about how a school newspaper reporter would approach a story about a campus football coach seen smoking marijuana—seemed as remote from the lives of most of UL’s students as the TV story I  showed them about snow in a later lecture. A few of the undergraduates were 18 year olds fresh from high school, while many others were in their 30s and some in their 50s. The civil wars, for most of the years between 1990 and 2003, meant these students were struggling for survival or seeking asylum in refugee camps throughout West Africa or fleeing with their families when university came calling for our fortunate students.

Where peace and a civil society still feel temporary and fragile, it means that in the news media, as well as in the experience of my students, there’s an over-reliance on pronouncements by the government and lawmakers. The fact that reporters are often given cash in a brown envelope, sometimes classified as transportation expenses, to attend press conferences by various government ministries and sometimes NGOs, is problematic. It sometimes felt like there’s a reluctance to do what we over-emphasize here: to pursue the individual experience, especially when people’s lives intersect with public institutions. In other words, “putting a human face on the story.”

Here’s one example from teaching: in a lecture with 200 students, I walked them through a fictitious story about a government grant to send 100 teachers to get a university degree.

As I asked volunteers to suggest possible interview subjects, one after another insisted that the requisite subjects were the education minister or other education officials. They were stuck to give me an answer as I danced on one foot, and then the other, asking, “Who else? Who else?” When one student finally half-heartedly suggested one of the imaginary teachers who would benefit from receiving the grant, I noticed some of the students were disappointed that this was the answer I was seeking.

What I appreciated each day was their determination to create a better nation and to support a democratic and civil society by completing the university degree now, likely after years of reeling from the horrors of losing family and friends during the civil wars.

It looks like that’s no easy feat: the UL Mass Communications department moved into a new building this past fall, 26 km from downtown Monrovia. It was a gift from the Chinese government, which also donated one computer lab— a sun-drenched room with 25 computers still covered in plastic and accompanied by manuals written in Chinese. While they’ve been loaded with software for text and audio editing, the desktops are not yet connected to the Internet or printers and are not used by any classes. Most students turn to the entrepreneurs who set up outside of campus, alongside the cassava vendors, to print assignments on-the-spot.

While some students I met already work for newspapers and radio stations—and one publishes his own weekly—and students can volunteer at the UL’s campus radio station, LUX FM, the UL students crave the experiential learning that most Canadian journalism students do after tucking The Canadian Press Stylebook into their backpacks. The student newspaper, The Pilot, hasn’t published all year because of equipment breakdowns, a common problem in a country where the heat overheats electronics, the humidity causes rust and mildew and the Atlantic winds cause corrosion. (There are no technical training programs in Liberia as far as I know, although the Chinese government announced plans to build a new vocational training institute.)

It’s a struggle for Western journalism schools to revitalize online classrooms, radio and TV labs with our tight budgets, but just imagine trying to do that in a country where all of the infrastructure—university buildings, homes, public buildings, roads, water and sanitation, as well as the equipment needed to run them—needs to be rebuilt.