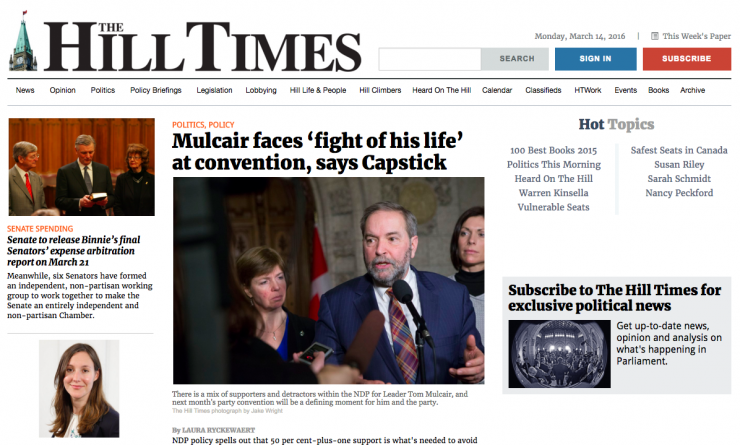 The Hill Times to absorb Embassy

Ottawa’s The Hill Times and Embassy will now share a paper and staff.

The Hill Times is absorbing Embassy. Two editions of The Hill Times will now come out weekly, starting on April 13. Both papers are published by Hill Times Publishing.

The change in government last year was a big reason for the merge, Jim Creskey, publisher of The Hill Times, told J-Source. “There are more people doing more things and talking about what they are doing,” he said, noting that, for example, scientists are now free once again to speak with media.

“Our beat is all of a sudden broadened and we want to reach out and grab it.”

The Hill Times, which currently publishes on Mondays, focuses on federal political news, while Embassy, published on Wednesdays, focused on the international portfolios of diplomacy, defence, immigration, trade and development, according to its website. The new Wednesday edition of The Hill Times will have more political content but will still serve those interested in diplomatic and foreign affairs news.

A majority of The Hill Times and Embassy content is behind a paywall. There are no plans to drop the paywall going forward. “Our paywall model is really working well for us,” Creskey said. “It’s grown a great deal.”

Creskey noted that almost every university in Canada has a site license for The Hill Times and that subscriptions continue to grow. Print circulation is about 16,500 weekly.

Creskey said there will be no layoffs as a result of the merge.

Embassy’s diplomatic editor, Kristen Shane, will become managing editor of the Wednesday edition of The Hill Times, while Kate Malloy will be the editor-in-chief of both editions.

A new website for The Hill Times also debuted in March.