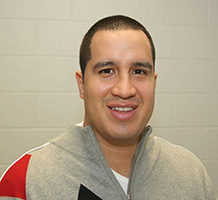 The Kingston Whig’s columnist behind bars

For the past three years, inmate Jose Vivar has given readers in the prison town a better understanding of life in custody.

That one-line biography on the Kingston Whig-Standard’s website tells readers of his column much of what they need to know about Vivar.

But the Whig’s prison columnist—likely the only one in Canada—has set out to show a more complex image of a man behind bars.

“People have negative views of inmates, so I wanted to try to humanize us a bit,” he said in an interview from Beaver Creek Institution, a medium-security penitentiary in Gravenhurst, Ont., where he recently transferred to be closer to his family.

“I started writing a journal trying to bring out the good side in inmates, trying to look for the positive things, and I found writing that also made me feel better about my experience.”

For more than two years, Vivar has been publishing dispatches from inside jail, first from Kingston’s Collins Bay Institution, where he met Greg Burliuk in a writers’ group. Burliuk was then a food and entertainment writer for the Whig and training to become a Catholic deacon in his impending retirement. He volunteered with incarcerated men as part of that training.

“Jose was one of the leading lights. He was the driving force behind it,” said Burliuk, who soon approached the Whig’s editors with the idea of a regular column.

Convincing the prison took several months, but the newspaper was on board. At first, Vivar would write his columns by hand and give them to Burliuk in person. When he was transferred to Bath Institution, he gained access to a computer in the prison library.

Vivar, 34, was arrested in 2007 with eight others during a police raid that turned up guns, ammunition, street drugs and cash. He was allegedly part of Toronto’s L.A. Boys gang and was acquitted of first-degree murder charges in 2004. He has a parole hearing later this year and his prison term ends in two years. He started journaling while awaiting trial in Toronto’s notorious former Don Jail.

Vivar said he always had an interest in writing and, before his latest charges, had enrolled in a college novel-writing course. His column is styled as a prison diary, or “day in the life” of an inmate. Vivar sends his copy to Burliuk, who gives it a light edit and passes it on to the Whig’s editor, Steve Serviss.

Like any columnist, Vivar is a divisive figure with a dedicated following, producing dozens of letters to the editor and online comments both praising and denouncing his work.

In his latest column, “Christmas in prison is a very special time, too,” Vivar described his melancholic feelings toward the prison Christmas tree with empty gift boxes underneath and the phone calls men make to their children on Christmas morning to listen from far away as they unwrap their gifts. He compared his own meal of plastic-tasting turkey, or “plurkey,” to the real bird being carved at home by a family he won’t see. It’s a touching and sad column, filled with remorse.

“On Christmas, I realize how much I am missing out on, and that is truly important in life. On Christmas, it is impossible for me not to think about all the people I have hurt—my family, my community—and how one day I can make up for all of it,” Vivar wrote.

He’s also written candidly about prison chefs; multiculturalism; the tattooed, muscular, “dangerous-looking, scarred-face” men tending gardens and playing chess or reading in the yard; their tears; forgiving the man who murdered his godson; violent men made docile by their circumstances and the myth of “dropping the soap.” He writes about the terrible food, competition for clean clothing and the barter system, which he says is superior to modern markets. It’s hard to tell whether he is being sarcastic.

Some of the writing is poetic: “Chills run down my spine just thinking of the day I was sentenced and the aura of lost souls felt in large courtrooms,” Vivar wrote in 2013. He doesn’t directly address the crimes he committed or the sentence he is serving.

He’s also been critical of government spending on super-jails, incarceration rates, mandatory minimum sentences and toiling away in provincial facilities awaiting trial. He writes about losing love, children growing up without their fathers and about not being there for his own elderly dad.

Unlike most writers who risk only their reputation with their views, Vivar’s mobility and safety can be directly affected by what he writes. He was moved from Collins Bay to Bath over safety concerns after he wrote about the strange allure of prison for some, according to Burliuk. And after referring to prison guards as rather constipated members of the Gestapo in his Christmas column, Viviar was warned his chances at parole could be affected. It wasn’t the first time he had been chastised by prison administration, he said: the column has been perceived as anti-authority and critical of the system. Until he gets out, Vivar said he’ll just be writing about the personal and not the political.

“I don’t believe there’s freedom of speech, especially from prison,” he said. “As an inmate, I have to be very mindful of what I write.”

His next column will be about staying in touch with his sons, ages 14 and eight, while he’s inside.

“I feel there should be more opportunities for guys like me to do what I’m doing,” he said. “What’s more rehabilitative than writing? Why would a system be against something like that, a guy wanting to better himself and using his experience and putting it down on paper?”

When he’s no longer incarcerated, Vivar won’t be a prison columnist anymore. He is working on writing a novel through a Toronto college course and is considering applying to journalism school.