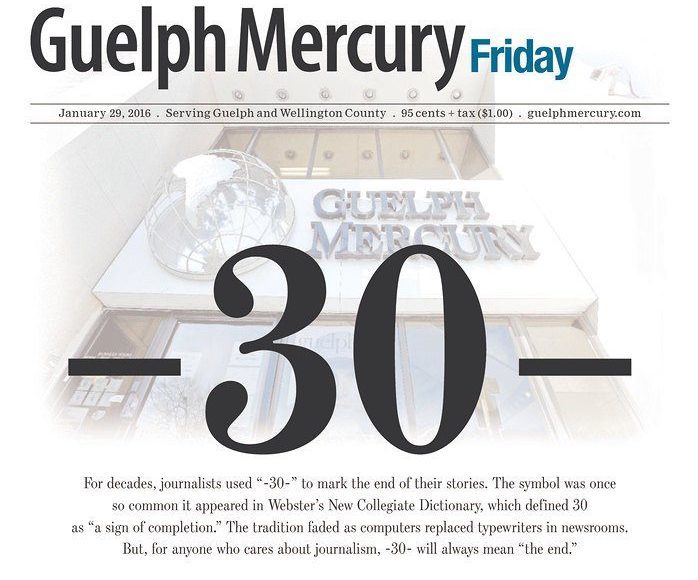 Over its 149-year history, the Guelph Mercury was an acclaimed local newspaper. The careers of many journalists who went on to do bigger things were fostered there; the staff won a National Newspaper Award in 2010; and they consistently dug deep into local stories.

Phil Andrews was the managing editor at the Mercury for just over 10 years—until one Friday in January 2016. Andrews was told by his superiors at Metroland, a subsidiary of Torstar, that the paper would be closed. The official announcement would come the following week, with the final issue rolling off the presses on Jan. 29.

Over a year since the final issue was released, Andrews has moved on—he now works in communications for the Ontario Ministry of Agriculture, Food and Rural Affairs. He spoke to J-Source about his time at the Mercury, and what it was like to be there during its final days. This interview has been edited and condensed for clarity.

J-Source: The Mercury had such a great reputation for many years for winning awards and cultivating young journalists.

Phil Andrews: There was an ambitious culture quite deeply rooted there when I walked in the door. The paper took a great deal of pride in being in doing journalism that was probably beyond its resources to do. The Mercury typically had a focus on always having things in the mix not for the next day’s paper. It would see the paper doing things like quite regularly doing computer assisted reporting, doing access-to-information-based reporting and being married to the idea at least once a week it would do a deep dive into a local journalistic feature.

It was a really oxygenating place to be the lead editor, but I think also to just to be a reporter, because you would have the opportunity to do value-added reporting on an annual basis and usually quite frequently in the course of any year.

I think people are sort of born storytellers, but I think you can really build a reporter. I think we did a great job building lots of reporters. I think we had four people win Goff Penny awards in connection to time at the Mercury over its last ten years.

J-Source: Did you see it as a farm team system?

P.A.: Oh absolutely. We took a lot of pride in building journalists. I had a funny exercise a few years ago when I was still at the Mercury and I was working with sort of a mentor person and they said, “how do you want to be remembered at the end of your career?” I wouldn’t in my mind think I’m going to start the next royal commision or bag a Michener award, necessarily. But I thought, “I’m extremely proud of having taken on really talented front of career people and growing them so they were ready for something at a bigger stage very soon after.”

It’s neat now to see the diaspora of younger journalists who have gone on to be terrific contributors at much larger news agencies and newspapers.

J-Source.: How did you see the paper’s role in the community? I can think of a few off the top of my head, but I’m curious what story stands out for you of having actually pushed change in Guelph or further away.

P.A.: It’s an ironic thing that we won a NNA while I was the editor there and it was for a piece that examined the gravel industry. That was important reporting work.

We sent someone to Africa because Guelph was connected to a really miraculous fundraising effort that had no corporate backing and it raised a million dollars for a clinic to combat HIV/AIDS in Lesotho. After they hit a million bucks, I sent a guy to Lesotho to chronicle what sort of impact $1 million made. When Cardinal Thomas Collins was appointed Cardinal we sent someone to the Vatican to observe it.

I felt newspapers have a public trust to do value-added reporting. If newspapers are the medium of record it is also the medium that has to go the extra mile.

It’s been interesting to observe a media landscape that had a daily newspaper engaged in reporting and then the void of one not being there and seeing what a difference of reporting the community has received. I’m not sure whether people realize the “you don’t know what you’ve got till it’s gone” aspect of what’s missing now.

J-Source: In that last year before the announcement in January 2016, what challenges was the Mercury facing?

P.A.: It was in a wider industry facing the same headwinds. Economically, the revenue proposition in daily newspapering was all based on display-ad revenue as opposed to an era where the circulation of classified revenue and whatnot probably would have on their own made the paper profitable. It was like all the other dailies in the market facing a lot of competition for display revenue with a shrinking readership.

I just think they had reached a point where the paper wasn’t able to deliver the value that it had. I think it had a value proposition where it was still punching above its weight—even after the paper closed it did well at the Ontario Newspaper Awards even though it didn’t exist anymore.

J-Source: When did you become aware the paper was going to close?

P.A.: That’s an interesting narrative. On the Monday of that week it was announced to the whole staff and community that this was what was going on. I was permitted to find out on the Friday before the Monday, so I guess I was given the managing editor benefit of being allowed to digest it for a few days before I had to deal with the brunt of it. But I think that was a somewhat sensitive move. It was important that I was there to support my coworkers when this really jarring news was unpacked.

It was interesting. I had for months been trying to nudge channels within the wider company to discuss my ideas for transforming how the Guelph media market was being managed as a whole and I just couldn’t get anywhere. I’ve come since to realize a decision had probably been made well before. There wasn’t an interest I don’t think in doing something that was strategically different than just closing the daily. That was sort of, I think an easy solution. I regret not being able to sit across from someone and articulate maybe a different vision.

J-Source: What would that vision have been?

P.A.:  I think it speaks volumes to the fact that Guelph Today was able to come in and become the impactful media website in town. For Torstar to have allowed that to happen —they really lost that valuable beachhead in the local online world.

I thought we ought to bring the weekly paper and the daily paper probably into the same plan. The Mercury, through closing their press and doing all sorts of change over the years, had a lot of surplus capacity in terms of space. We could have taken in the weekly newspaper. We could have blended a whole bunch of distribution type functions.

I was at the point where I think we would have really thought about being an online newspaper in all sorts of ways, but I thought we could also put out a really value-added big thick newspaper, and maybe put that out each Saturday.

J-Source: Going back to that week, the reaction was really strong, even across North America—Poynter reported on it and there was a strong community reaction. How did you feel about reading all that and seeing how people in the community were reacting to the news?

P.A.: That was an incredible thing to live through. It had that quality of being an actor in a movie, as you saw a movie unfold. It was that dramatic.

At the time there was a lot of confusion in Guelph. The way the announcement was actually done, a lot of people thought that the paper was ending but that the staff was going to be hanging around and keeping a website going. It took people a while to sort of really see that wasn’t the case either.

That was an incredibly emotional week. I was massively proud and remain so about the professionalism of the crew in all departments that were on the final staff of the Mercury for doing their jobs that week with great deal of poise and a great deal of professional and putting out some terrific newspapers right up until the final edition.

It’s funny. Newspapers and all media, they cover factory closures all the time. It’s a really powerful thing to be the factory that’s closing and to have greater insight into all the years of you being engaged in similar journalism. That said, we weren’t a button factory, we were something that was an institution in Guelph— a element of the community for 149 years. You felt that something was being ripped out of Guelph when we were shutting down.

J-Source: Do you ever consider going back to journalism?

P.A.: I was really hurt not to have an opportunity presented to me by Metroland when the Mercury was being wrapped up. I felt I had sort of developed a reputations as a commodity that they would want to find a role for. Even if it had been an opportunity that geographically or whatnot wouldn’t have been a fit for me, I was hurt that something wasn’t presented that I could have contemplated to continue being engaged in journalism.

I’m also a dad and husband. We’ve got two kids tracking to want to go to university and I felt I needed to see if it’s important to expand how I present as a professional.

On the very day that the Mercury closure became news, a former coworker of mine—someone I had actually hired as an intern—was the person who reached out to me from a different ministry and kicked the tires on working for her doing kind of the media spokesperson work and frankly, that change felt like an opportunity to experience a learning curve all over again. And it has been very good. The work is a giant departure from being engaged in journalism.

Doing public service in the communications field is noble work too. It feels different than having done journalism. I’m happy to have landed where I have and I’m still only in a contract role, but I miss lots of what my career of journalism brought me in terms of satisfaction and the ability to have the opportunity to direct resources to explore things for the community.

H.G. Watson can be reached at hgwatson@j-source.ca or on Twitter.  A portion of this interview will be included in an upcoming piece by the author in Editor & Publisher magazine. 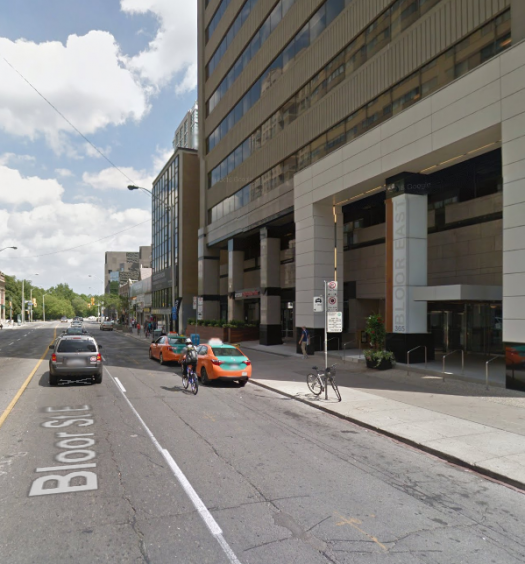 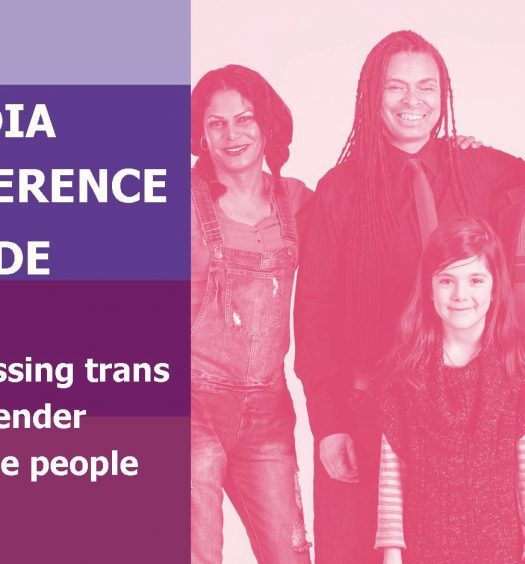 7 years ago
WorkHow To

Read More
Advice for writing about trans people and stories