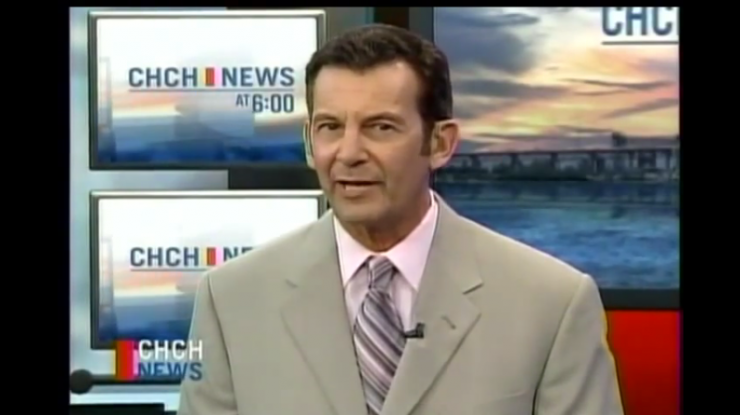 The untimely end to my T.V. career

Broadcaster Mark Hebscher recalls the last day at CHCH news, when staff found out they were being fired.

CHCH-TV is still alive, but it's real soul passed away last Friday afternoon. The heartbeat of Hamilton and it's surrounding communities was badly wounded. It was a sneak attack.  It gutted the entire building. I lost my job, along with dozens of others.  Some of my friends got to keep theirs.  And just two weeks before Christmas.

I've worked in front of a camera or microphone for most of my adult life. I started at CHCH in Hamilton in February of 2003. Prior to that I had worked for three other television stations and six different radio stations. I worked for really good managers at excellent stations and I worked for bumbling incompetents at stations that lost money. When Channel Zero bought CHCH from debt-riddled CanWest in 2009, it "saved" local TV news and allowed all of us to keep our jobs. For that, Channel Zero got a pass. A honeymoon. A get-out-of-jail-free card.Literally. After all, had they not bought us, we would've lost our jobs, so we should be grateful. It was this attitude that continued, unchecked, for years at CHCH. Even though I loved my job, co-hosting with Liz West on "Square Off" and with Bubba O'Neil on "Sportsline", the mood in the building was always pretty bleak. Not a lot of the enthusiasm you'd expect from people who gather and write and produce and deliver the news.  Management didn't offer a lot of encouragement or support. Decisions were made that baffled even the most seasoned broadcasters. Too many people put in too many hours for too little pay. People were put in positions they had no business being in. Creativity was stifled, and the newsroom and studio were a sausage-making operation, grinding out an incredible 16 hours of local programming a day from Monday to Friday.

And it was against this backdrop, on the morning of December 11th, 2015, that a loyal employee of over 20 years arrived at CHCH TV for what would be her last day. In two weeks, she would be retiring from the company she so faithfully and dutifully served for all those years. No doubt there would be a "hall party" for her in the corridor outside the studio the following week. Just like Dan McLean and Connie Smith and Al Sweeney and all the great employees who graced the halls of CHCH over the years and retired with a small measure of recognition and dignity, along with a couple of store-bought cakes and a few urns of coffee. Unfortunately, there would be no retirement party.  When she tried to log on to her computer, and couldn't, it was all over. In a matter of minutes, she was being escorted down the stairs and out the front door. In tears. Shattered. Two weeks before Christmas. Two weeks before retirement.

I didn't hear about that story until after I had arrived at the station that Friday morning. However, I did notice an unexpected deposit from CHCH in my bank account, and it wasn't even payday. A bank error or a harbinger? I asked my boss if he too had received a deposit. He had. Did he know anything about it? He did not. Hmmm. Pretty soon, the whole building was in full-on worry mode. But we were still on the air, delivering the news. Liz and I, along with producer Aaron Rathbone, were writing our show, and getting ready to tape, as usual, at 1 pm. The union sent an email telling us not to touch the money that was in the account. They also told us that the company, Channel Zero, was not returning their calls. But we were still on the air. The show must go on. And so, we taped our half hour show, with Liz and I using gallows humour to lighten the mood in the studio. It wasn't working. Pretty soon we found out that the news at 6 was being cancelled and that we should await a 4 p.m. announcement. Soon thereafter, they told us not to bother writing "Sportsline" because that show, scheduled to air at 5 pm, was also cancelled. Uh Oh.  Then the tequila and the beer started to flow. Security guards and other strangers showed up in the building. People started gathering up their belongings and snapping pictures and hugging each other. Everybody was confused, but resigned to a terrible fate nonetheless.

At 4 p.m., after we had been on the air with live news for 11 hours that day, a message from one of the owners. He was sorry, he said, but the company had to do something, so we were losing our jobs. But the station would still be covering local news. And he said he was sorry again. And he looked awful. And I felt like throwing up. Meanwhile, in the newsroom, everyone was gathered around the TV to see the same announcement that I was watching in my office. I'm sure they felt the same as I did. Within 5 minutes, my boss started calling out the names of those people who should go upstairs to Studio "B" to get their instructions. If you didn't hear your name called, you were to go downstairs to Studio "A" to learn your fate.  I was not present for this role call, but when I saw people streaming past my office, and UP the stairs to Studio "B", I naturally followed.  My name had not been called).

Studio "B" was where we always held our Town Hall meetings where the owners and management would parade out the latest Channel Zero production or big idea.  They served coffee and cookies and had a general bull session and answered some questions and it was all nicey-nice. Remember, these are the guys who "saved" us, so they were automatically better owners than CanWest, the previous proprietors. Studio "B" was where they told us about the exciting new programs they had produced. Like "Spin Off" with executive producer Mark Burnett of "Survivor". Terrible show. A complete bomb.  Like the time they told us they wanted to buy a TV station in Birmingham, England and turn it into an all-news operation. That one died on the vine. Then there was a show called "The Pinkertons", that they were so proud of, we had to sit through a 15 minute highlight reel of the show. After it was viewed, they asked me what I thought of the show and I said "Great show".  I lied.  It was awful.  Everything they touched, it seemed, had turned to mud. CHCH was the just the latest in a long line of miserable failures for Channel Zero.

Oh, did I mention that Channel Zero had nothing to do with Channel 11 LLP? Yes, we were told, right there in Studio "B" (This time there was no coffee and cookies)  that we were all terminated. But, that ALL of us would be offered a job under a new management company because Channel 11 LLP had gone bankrupt.  The bankruptcy trustee was there to explain what bankruptcy was and how we could still get a few thousand dollars of severance through some equalization plan. He went on to explain that we all had to leave the building while they went over inventory, but we could come back at a later date after we had accepted our new position. Then the owner, the same guy who had made the announcement on TV, tried to answer some questions about severance (none) and the union (busted) and the positions that would be offered (a joke) and why did they have until Sunday night to accept or reject the new offer?  Some people were crying. Others appeared relieved that they still had jobs. I was thinking my job was safe when suddenly, I felt a tap on my shoulder. It was my boss.  He refused to look me in the eye. "You're in the wrong room".  "What?"  "You're not supposed to be here.  I'm sorry"  And then he turned and walked away. That was it. The end of my TV career.  The one's who went to Studio "A", where I should have gone, got gassed. Quickly. Efficiently. Escorted out of the building forever. In tears. Humiliated. Treated like garbage after all those years of loyal service. Me? I was the putz who assumed he would survive the cuts.  After all, I was pretty damn good.

A security guard was waiting for me to leave. I wanted to go back to the office and pick up a few things. The security guard wouldn't let me grab anything but my coat, my briefcase and my headphones. He told me he was sorry (everybody was sorry) and that he enjoyed watching me on TV. I asked him if he'd let me grab some files and some other items.  He told me he was going to the bathroom. I scooped up a bunch of things and threw them into an empty blue box. 12 years of notebooks, file folders, tapes, clippings, scripts, teacups and knick-nacks.  I forget to grab my autographed Doug Gilmour framed picture off the wall. I never got a chance to say goodbye to my viewers or my co-workers for that matter.And no severance pay. For anybody. Can you imagine working 20-30-40 years and they cut you off at the knees like that? That's immoral and unethical and wrong on so many levels. Channel Zero, or whatever the numbered company that houses our money is called, will not get away with this.

Mark Hebscher has been a sports commentator on TV and radio since the late 1970s. His on-air persona and attitude is unique and refreshing. Mark co-hosted the ground-breaking and popular Sportsline on Global TV for 11 years from 1984-95 with current TSN Radio host Jim Tatti. It was here that while developing a weekly collection of sports bloopers known as the Hebsy Awards, that Mark created many new popular sports terms (aka – Hebsyisms) for the mass viewing audience. (e.g. “Top shelf where they keep the peanut butter”!) Mark also did radio play-by-play for both the Toronto Maple Leafs and the Toronto Argonauts in the mid 90s, and hosted Maple Leaf games for 7 years on Global TV. He is also a two-time Gemini Award nominee for Best Sportscaster.

This story was first published on his website, and is republished with his permission.