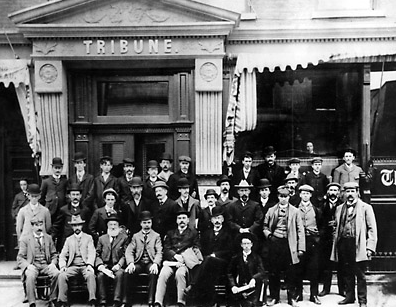 Tribune staff at the Bannatyne Av Building” 1910 (Courtesy Heritage Winnipeg)
By Eric Mark Do, Reporter
The Winnipeg Tribune published its first issue on Jan. 28, 1890, after founders Robert Lorne Richardson and Duncan Lloyd McIntyre purchased the Winnipeg Daily Sun's presses upon its closure.
Richardson was formerly the Sun's city editor and worked for the Toronto Globe and Montreal Daily Star before that. McIntyre had also worked for the Sun, as well as the Manitoba Free Press and Port Arthur Sentinel.
Winnipeg Tribune “Mail room” February 18, 1950 (Courtesy Winnipeg Tribune Photo Collection)
The paper thrived as the Winnipeg Free Press's rival daily and was eventually bought by Southam Newspapers in 1920. But on Aug. 27, 1980, Southam suddenly shut down the 90-year-old paper, putting 370 people out of work. On the same day, as discussed in Canadian Newspaper Ownership in the Era of Convergence, Thomson Newspapers shut down the Ottawa Journal, “leaving the surviving papers (the Winnipeg Free Press and The Ottawa Citizen) in monopoly positions in their respective cities.” Within a week the federal government appointed a Royal Commission on Newspapers, later known as the Kent Commission. The final report, as journalist Jordan Press writes, “is a remarkably detailed view of the news industry, one that hasn’t been repeated since.”