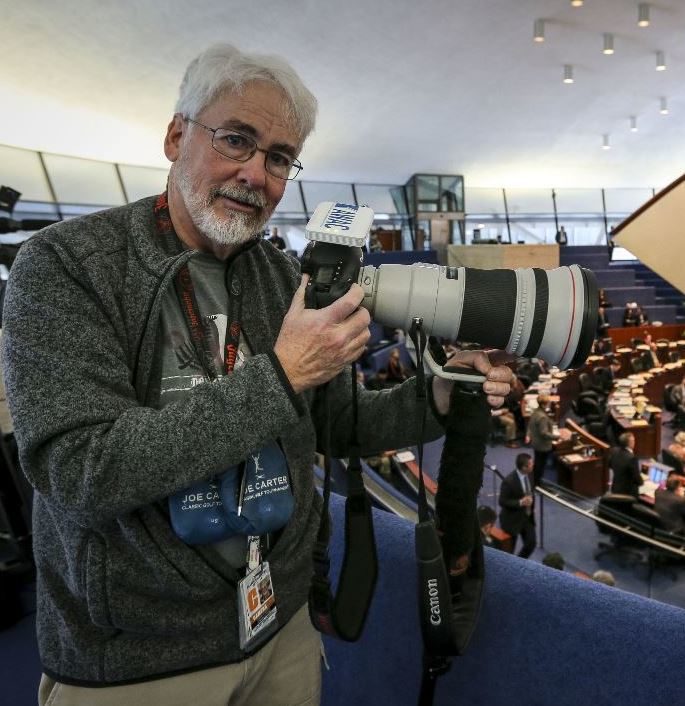 It’s as quick as shooting a picture on your smartphone and posting it to Facebook or social media seconds later, with one exception—you’re shooting with a professional camera. Photojournalism editor Mark Taylor talks to Taras Slawnych, visuals editor at the Toronto Star, and the brains behind this new technology.

Imagine a gadget that attaches to a professional DSLR camera and sends photos directly to a live blog, almost as fast as you can snap them. Taras Slawnych did—and then he built one. Slawnych, visuals editor at the Toronto Star, is still tinkering with his game-changing gizmo. But Star photographers are already using a prototype in the field, one of which zapped pictures from the Olympics in Sochi to Toronto in record time.

J-Source: So what is this new device you’re using and how does it work?

Taras Slawnych: It’s a device called an AWAC. It stands for Automated Web Access Coupling. We wanted to feed live blogs the way our reporters cover Leaf games and Raptor games: they go into ScribbleLive and comment live on the game. One of our photographers, Rene Johnston, commented that we should be doing the same thing. So we started, probably for about a year, trying to develop different ways of doing this. There are a whole bunch of challenges filing at the Air Canada Centre. There are lights around the arena and every time these neon lights and billboard signs go on it creates a lot of interference. Traditional ways of submitting with a WiFi card or some other way just didn’t work. We started experimenting with direct connections to computers, to iPads and then to MacBooks and then working on configurations and (HTML) scripts that I actually wrote to send to ScribbleLive. Then it progressed to a more portable device, which sits right on top of the camera, on the hot shoe mount.

J-Source: So you actually created it?

TS: Yes, the latest design was actually 3D printed just last week (in February) and it just came in. We’ve got some modifications to do on the new case, but it’s pretty cool. It’s black and transparent on top. It basically provides the Internet connection, the routing of it, and then sends the picture to an FTP site. There’s a (HTML) script here that handles it and then there’s another script that sends it to a ScribbleLive blog and the (Toronto Star) archive at the same time.

J-Source: Are you thinking about patenting it?

TS: This is cool because we’re the only ones that have it. I don’t know if we want to start patenting it and sharing this technology too much. It’s obviously an advantage to us because the Sun guys, the Globe guys and the wire guys are trying to figure out what the hell we’re doing. It’s not connected or tethered to anything else except for the camera.

J-Source:  How do people see the photos?

TS: If there is a live event, like the Raptors game, you go onto our website, either on mobile or on desktop, and you will see a live blog of the hockey game. Within that live blog there are comments from our reporters as well as live pictures coming in from our photographers. I sent Richard Lautens with the technology to Sochi for the gold medal hockey game. He was filing live pictures from there. That big (Chris Kunitz) goal was actually in our ScribbleLive event, and in our archive as well, within 45 seconds.

J-Source:  How does it differ from similar technology out there?

TS: Traditional wire agencies have a whole bunch of things to do this as well. The problem is the traditional workflow. Let’s say it’s a wire photographer shooting the game like we did. He sends the picture, and he’s probably sending it just as fast as we are. The picture then goes to headquarters and is then put on the wires. There’s probably a minute delay, maybe 30 seconds even. The picture is then sent out to an FTP to newspapers around the world. Then you’ve got a processor from your archive that is picking up these shots every 30 seconds, every minute. To put that picture online, you have to publish that picture onto your pagination system and wait for it to appear there. That’s probably another 30 seconds and then you have to move it onto your online Content Management System, which is probably minimum 30 seconds. And that’s if everyone is watching everything and has the time to do that. So that’s at least two, three minutes if every step worked out perfectly, which I doubt because there’s going to be other pictures moving on the wire. The editor that’s pulling that picture might not be paying attention because he’s doing other stuff at the same time. Our picture, without anyone having to touch it here, is on our blog within 45 seconds.

J-Source:  How’s it going over?

TS: The photographers like it. It’s working and it’s great and there’s lots of feedback from the photographers on what we need to do to fix it.  The next step is looking at the problems or difficulties we’re having, like the case design for the hot shoe mount, and what do you do if you have to use a flash— where do you put it then? Do you wear it around your neck, put it in a pocket?

J-Source:  Does every frame the photographer shoots get transmitted this way?

TS: No. They chimp it (look at photo your photos on a DSLR in between shots) and they select it.

J-Source: How many of these AWACs do you have?

TS: The Star has two prototypes and one completed unit.

J-Source: And how much did it cost to build them?

TS: It's hard to say how much money as most of investment was in time. IT has spent around two months working on the receiving software. And I've been working on this project off and on for just over a year, including lots of nights and weekends. Hardware, design, 3D printing and Internet costs have been under $2,500 in total.

J-Source:  So has it changed the way they work?

TS: Not really. The only thing that changes, especially for hockey, is there’s a voiced caption as well. There isn’t an official written caption. There’s a voice tag from the photographer that describes the photo.

J-Source:  What about your audience—how are they responding?

TS: I think people like it on the blogs, because it all of a sudden it changes things and makes it more lively. What we’re trying to do is include more local coverage of more events around Toronto. The typical way you’d shoot that is you take the pictures, you go back, you file the pictures and then you post them in a gallery or post them in the newspaper. What I’m trying to do with this is make it a live event. We’ve all taken pictures with cell phones and posted them instantly to Facebook but we haven’t reached that moment, until now, that we can actually do this with a professional camera. This whole thing doesn’t need to be tethered to anything. It’s got its own Internet connection. The battery lasts three to four hours. It’s a brave new world— you have to embrace technology and look how you can further things. You have to be ahead of it all the time. It’s not only about getting the pictures out quicker, it’s having them posted quicker. You can send them quick but unless somebody actually does something on the other end, then who cares.

This interview has been edited and condensed. All photos courtesy of Toronto Star.