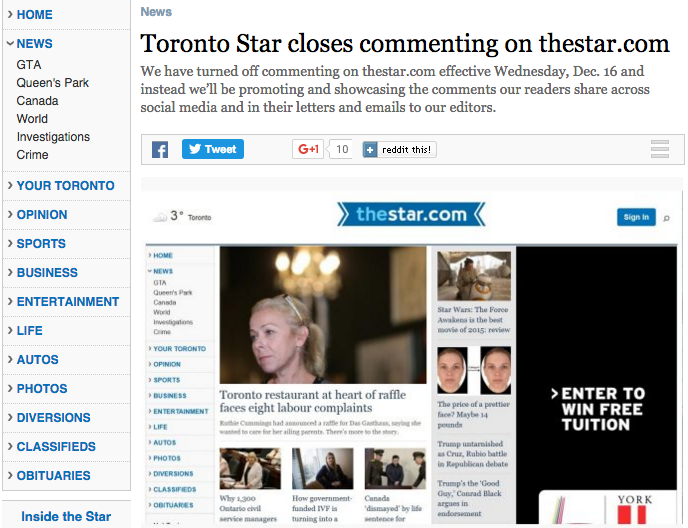 Toronto Star editor on why they decided to close comments on stories on thestar.com

“They were homophobic. They were racist. They were sexist and in many cases they were just stupid,” said editor Michael Cooke.

Comments are now closed on the end of stories on thestar.com.

“In the end I think we just got tired of the uselessness of many of those comments,” Michael Cooke, the editor of the Toronto Star, told J-Source. Editors and reporters at the newspaper have been uncomfortable with comments that appeared at the bottom of stories on thestar.com for a couple of years, he added.

“They were homophobic. They were racist. They were sexist and in many cases just stupid,” said Cooke. “One way to stop that nonsense was to move to a different form of commenting.”

Cooke made the announcement on Dec. 16 with a post on thestar.com. Readers will still be able to comment on Facebook, Twitter and on the other social media platforms the newspaper uses, where generally the tone of discussion is better. “They’re not horrid and cruel, mostly,” said Cooke.

Readers can also write directly to the editor or Star reporters.

Cooke also said that there would be cost savings from killing the comments under stories on the website. “Comments have to be monitored,” he said. “You have to pay to monitor them.” He would not disclose how much those costs were.

The Toronto Star is not unique in its decision. On Nov. 30, CBC closed comments on all stories about Indigenous people, citing racist remarks that were all too common. Cooke said that a story thestar.com published about the Truth and Reconciliation Commission's final report last week resulted in horrible comments. “Why do you want to welcome people who are going to put that kind of slime on our website?”

The Sun chain of newspapers closed comments on most of its stories in September, and The Globe and Mail makes commenters register—its comment sections are moderated and users have to follow community guidelines. In the United States, Reuters, Popular Science, Mic and The Verge have all closed their comment sections.

As for the future, Cooke doesn’t know if comments will ever return under stories on the Toronto Star's website. Instead the Star will find ways to integrate comments from other platforms into its coverage, reflecting a wide range of viewpoints.

He said that most of the response received about the policy change has been understanding and positive.