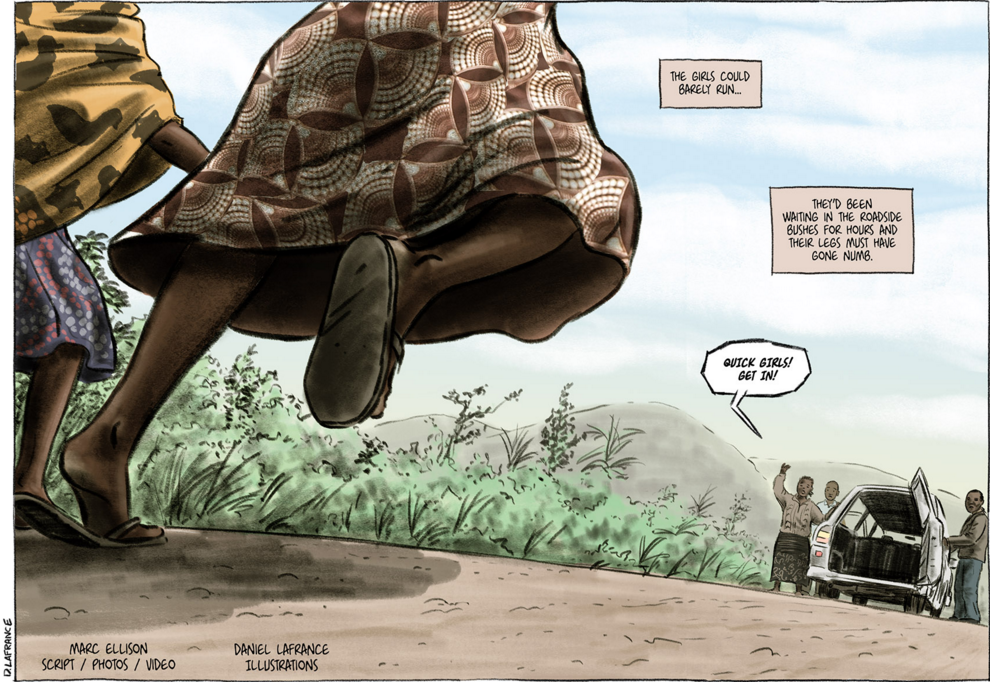 Turning news into a graphic novel

Marc Ellison’s “Safe House” is a graphic novel that tells the story of FGM in Tanzania.

Marc Ellison was standing near a village in Tanzania’s Mara Hills, working on a story about a safe house for girls escaping from female genital mutilation, when one of the activists told him there were a couple of girls who wanted to escape right then—and Ellison had a car.

“It was that sort of ethical question of, do you get involved,” he said. But, after reporting on the safe house for weeks, there wasn’t really any question in his mind.

They waited with the car idling for the girls. “I thought, ‘Oh, shit, I should at least get out of the car and take some photos,’” he recalled. As he got out, the girls came out of the bushes beside the road, sprinted towards Ellison’s waiting car and piled in.

It’s a story you don’t have to imagine to see—because Ellison made a graphic novel of it. Created as part of his Aga Khan Foundation Canada and Canadian Association of Journalists international development reporting 12-month fellowship, the story, “Safe House: Voices from the cutting season,” appeared in print in Sunday’s Toronto Star, followed by online release on Monday—the second piece of journalism he’s told using a medium better known for featuring men in tights.

His pitch for the fellowship was centred around telling the story as graphic novel because it’s an innovative approach. Ellison’s first project, an animated graphic novel called “Graphic Memories,” was nominated for a 2016 World Press Photo multimedia award.

He’s not the first reporter to experiment with the form. Joe Sacco is perhaps the best-known journalist to use graphic novels to tell stories of his reporting in Palestine and Bosnia, among others.

Ellison does not draw his own comics. Toronto-based artist Daniel Lafrance drew “Safe House” based on photographs and descriptions Ellison provided. Ellison also codes the stories so they are responsive (though he prefers people read the stories on as big a screen as possible).

Preparing the story is similar to getting ready for any big journalism project, with some very different considerations. “With the graphic novel, there’s the danger of taking artistic licence and liberties and over sensationalizing things,” he said. A lot of planning goes into his reporting trips to ensure they provide all of the details and information he needs to tell the story. “That level of meticulousness has to be even greater with graphic novels because there is so much detail of involved.”

Ellison said he almost mentally storyboards the graphic novel in his mind before he goes out to report. “Obviously, there is a lot of things that you can’t predict, but you have to have in your mind roughly what the layout of the graphic novel might be, are you going to structure it around particular characters of themes, things like that.” Lafrance has never been to Tanzania so he needed Ellison to take lots of reference photos so he could accurately draw the scenes depicted in the story.

One subject of the story was particularly vulnerable, according to Ellison—giving her some anonymity just required the artist to draw her differently.

Comics are a universal format in that what cannot be conveyed with words is more easily understood with pictures—and every place in the world has them. “In the UK, in North America and even in Tanzania, kids and adults are familiar with comic books and cartoons,” he said. According to him, many humanitarian organizations and NGOs use cartoons to teach various subjects.

It takes far more time than a traditional reporting project, but that is worth it for Ellison. “It’s what I call slow-cooked journalism,” he said. ‘It’s a lot of work, but I think the payoff is definitely worth it.”

Around the world: Ebola nurse breaking quarantine and capture of survivalis...

Read More
Around the world: Ebola nurse breaking quarantine and capture of survivalist gunman in U.S. feature prominently in headlines
8 years ago
International