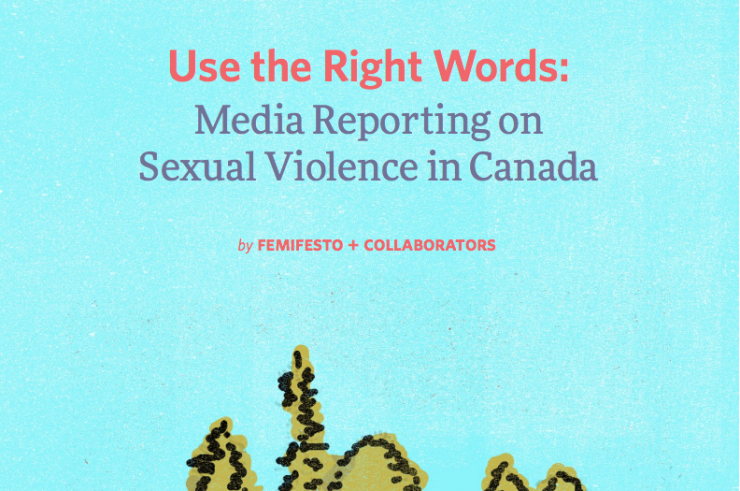 Using the right words when reporting on sexual violence

New guide provides guidelines on how to report on sexual violence.

Two days after preparing a presentation for the Use the Right Words launch at Ryerson University, Akio Maroon couldn’t sleep.

The statistics and facts that Maroon, chair of the board of directors at Maggie’s Toronto Sex Workers Action Project, uncovered about the representation of sex-trade workers and sexual violence in the media kept Maroon awake. For instance, Maroon could not find one example of media coverage of a black sex-trade worker.

“When you see people online who are naming their attackers, what do they look like? Who are they? Who gets the voice of being the victim and who doesn’t?” Maroon asked the audience at the event on Dec. 2, the official launch of the Use the Right Words guide on reporting on sexual violence.

The guide was created by femifesto, a group involved in education, training and research about gender-based violence and is available online. The launch brought together a mix of activists and journalists who agreed that there is much to be done at every level of journalism to improve the discourse about sexual violence.

Pascale Diverlus, a fourth-year Ryerson journalism student and co-founder of Black Lives Matter Toronto, decided to go into journalism because she, “was tired of seeing how journalists portray everything.”

But some of those poor practices, it turns out, are often presented in the very schools teaching future journalists.

Diverlus recounted one ethics class where a speaker, a lawyer, told them it was OK to ask a survivor why she didn’t leave her assaulter.

Lauren Strapagiel, the social news editor at BuzzFeed Canada who was on the advisory committee for the new guide, was surprised Diverlus even had a class on the ethics of reporting on sexual violence in journalism school—they did not talk about it while she was a student.

Every choice—from which photo is used, to which survivors’ narratives are told—speaks to biases in the media.

Cyndy Baskin, an associate professor at the School of Social Work at Ryerson, noted that photos of Indigenous women are often smaller and less intimate than those of other women in stories about sexual violence, which means the audience can’t make as much of a connection with them.

And the survivors who get to tell their stories are still overwhelmingly white and cis-gendered (their self-identity is the same as their biological sex). “People who get to define these narratives are often white,” said Maroon.

Strapagiel noted that the goal for most newsrooms when reporting on crime is getting the facts correct and not getting sued, which, when combined with rape culture, has “really awful results.”

“One way that plays out is the use of the word allegedly,” Strapagiel said. “There’s sort of this attitude that if you sprinkle that word into an article enough you can’t be sued.” But that word can be harmful when you are talking about a survivor's experience.

The Use the Right Words guide also outlines language that is appropriate to use when reporting on sexual violence. For example, the guide encourages using the words a person uses to describe themselves—a survivor over a victim, for example, unless they would prefer the latter be used. Language and sentence structure should also put the accountability on the perpetrator.

It’s also about changing newsroom culture. For example, in the Toronto Star story that broke the news of the allegations of sexual violence against Jian Ghomeshi, the three survivors quoted in the article are described as educated and employed. Strapagiel said that the use of the words really demonstrated who media consider to be “credible survivors.”

That’s why Strapagiel said newsrooms need advocates who can ensure that journalists aren’t sensationalizing these stories and keep an eye out for problematic language and storytelling at every level of the editorial chain.

“There really needs to be a change,” said Strapagiel.