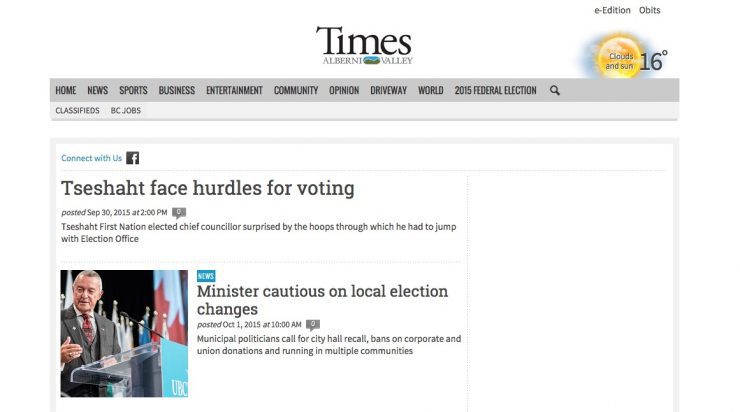 Six full-time staff affected at the paper serving a community of 25,000 after Black Press decides to shut paper down.

The Alberni Valley Times will close by the end of 2015.

The Alberni Valley Times serves a community of about 25,000 in the Alberni Valley on Vancouver Island. It was a daily newspaper until August of this year, when circulation was reduced to four times a week.

“The paid circulation had dropped to such an extent that, prior to us buying the paper, the previous owners had made a decision for the Times to be delivered free twice a week to compete with the News,” he said. “So when you add it all up, it just doesn’t make sense to run a paid daily circulation paper when you have to give it away free.”

Ad revenue had also dropped significantly. O’Connor did not give a specific number on how much the Times was losing but said it was well into six figures.

Editor Eric Plummer said the closure caught his staff by surprise. “Staff here have been working very, very hard to put out a product in the last couple months that we’re proud of,” he said. “This is hard for people.”

The Times has six-full time staff, a publisher shared with another paper and several contract delivery people. The masthead was once double the size, Plummer said, but had shrunk in recent years.

Black Press, which owns more than 80 community newspapers in British Columbia, acquired the Times, along with several other papers, from Glacier Media in 2014. Since then, the Campbell River Courier and Parksville Oceanside Star have closed.

What these towns had in common was that there were two newspapers there—a situation that O’Connor said is not sustainable. “There is room in Port Alberni for one profitable newspaper.”

The loss of the Times will be a significant change in the community, where, in one form or another, it had been the paper of record since the 1950s, according to Plummer.

“There is an appetite for this product here,” he said.

However, O’Connor said that with one newspaper in the market, it will be able to do a better job of covering more stories. “At the end of the day the readership will increase and the size of the paper will increase,” he said.