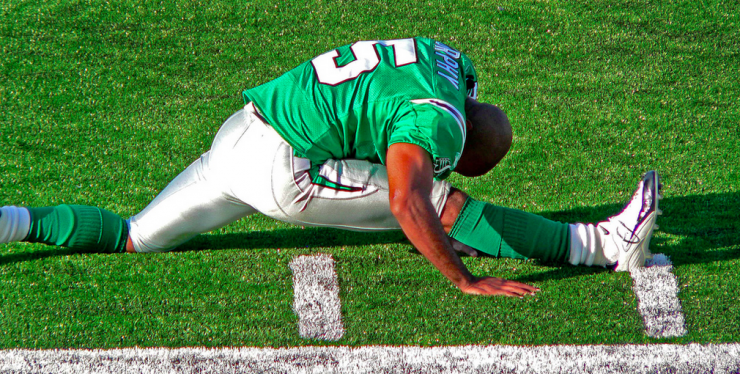 What’s it like to be a sports columnist when the home team is losing?

So far this season, Regina Leader-Post’s Rob Vanstone has spent at least twice as long answering emails from distraught Roughriders fans as he has writing columns.

So far this season, Rob Vanstone has collectively spent about 12 hours writing his post-game columns about the Saskatchewan Roughriders for the Regina Leader-Post. He’s spent at least twice as long answering emails from distraught fans.

The team’s defeat by the Edmonton Eskimos on July 31 means that of the six games they’ve played so far this season, they’ve won exactly none. It’s a losing streak not seen since 1979, and “Rider Nation” in CFL-mad Saskatchewan and beyond is having a tough time.

Vanstone, who has written about the team since 1996 and is also the paper’s sports co-ordinator, has seen lousy seasons before. “I was appointed a columnist in August of  ’96,” he said. “I walked right into a nightmare of a season.”

The losses this time around, however, feel different. “They’ve got things in their corner that nobody could have imagined twenty years ago,” he said. “I think the franchise is held to a different standard now because they’ve got resources that are the envy of other teams across the league.”

A few examples: two of the team’s four Grey Cup wins have happened since 2007. The team is third only to the Toronto Maple Leafs and the Montreal Canadiens when it comes to merchandise sales. A new stadium is under construction.  And financially, the team now pulls in million dollar profits annually. “They’re a powerhouse,” Vanstone said.

And they’ve been losing.

For Vanstone, whose days off, holidays and work hours are ruled by when the Roughriders practice or play, what’s this like?

Although his armchair-psychologist services are in high demand, he is staying steady. For almost 20 years now, Vanstone has spent the day after game-day fielding questions, opinions and angry rants from fans. In the early days, the phone would ring all day. “It used to feel like an open line show,” he said. Today, the feedback comes mostly through social media or email.

“A lot of times they just want to vent,” he said. They’re upset with Vanstone’s column or the team. But as he continues to be touched that they’re kind enough to reach out to him, so as long as they’re respectful, he always replies.

But whether the team is losing or winning, he says the way he does his job doesn’t change. The fans’ mood—which he describes as “shock and outrage” just now—doesn’t affect his.

Born and raised in Regina, Vanstone is used to way the Roughriders dominate community life. He understands fans’ passion personally: Rider fandom is in his DNA too. “I was born in 1964 and I went to my first Roughrider game in 1963,” he said. His mom attended a game when she was pregnant with him, even running out onto the field with the other fans to celebrate the win.

He’s also written two books about the Riders first two Grey-Cup winning teams: West Riders Best, about the 1966 team, and The Greatest Grey Cup Ever, about the 1989 one.

Thus, even if he can’t cheer up the fans who reach out to him, at least they know part of him gets their pain.

When the team is losing—just like when it’s winning—he keeps “fun” as his key word. Whether victory belongs to Saskatchewan or not, Vanstone never loses sight of the fact that he’s writing about a game. His approach only changes if someone is injured or there’s a tragic human element.

“One of my philosophies is that when people are up in arms, about the team or about me, that it’s about sports. It’s about entertainment and it’s still supposed to be fun,” he said. So he loves bad puns, jokes and reaching for laughs.

“That doesn’t mean you cant be critical or cutting, or complimentary, but one thing that I always try to do a lot is to be light-hearted without mocking the whole process,” he said. “Because I know people take it seriously. “

As always, his best source of questions: the fans. Given the passion of Rider fans—they care about all issues involving their team in February as much as they do in July—whatever they’re asking about, Vanstone knows he needs to be asking about it too. During the five- or six-minute walk down the ramps to the dressing room he’ll listen to what fans are saying. If his Twitter account is flaring up with the same repeating questions, he’ll know he needs to ask them in the press conference. During a losing streak, this is no different.

He never forgets: football is about humans and humans have feelings. Along with seeking to be as quick to praise as to criticize, one of Vanstone’s main goals with his column is to simply explain “the state of football in Saskatchewan” at any given time. So if they’re playing well, how? If they’re not playing well, why?

This trick while he does this, he says, is to at once remember that while he owes it readers to try to bring them some answers, what he writes about players, coaches and managers can have an effect on them.

The risk with this for a columnist—during rough stretches like this one or otherwise—is that it keeps you from doing your job. “You don’t want to be so cognizant of their feelings that everything is written gingerly.”

When you’re doing your dream job, it’s all good. When Vanstone was 18, his dad died. In the eulogy, it was predicted that someday he would do the job he’s doing right now.  Days later, he went off to Saskatoon to watch the Roughriders training camp. “Thanks goodness football season started then because he gave me something to take my mind off of it.”

The day he was set to go to propose to his now-wife, the Roughriders called a surprise press conference. His response? He pocketed the ring and postponed asking the question. Their eventual wedding date? May 15: the narrow window between the junior hockey and football seasons.

So while Vanstone-the-fan might be as bummed as everyone else, Vanstone-the-columnist continues to adore his job—even when he isn’t able to offer much cheer to those fans who reach out to him. In his Aug. 1 column, Vanstone closed off by calling it a “hopeless season.”

“I still can’t believe someone is going to send me an email asking me what I think about the Roughriders,” he said. “That’s so cool.”