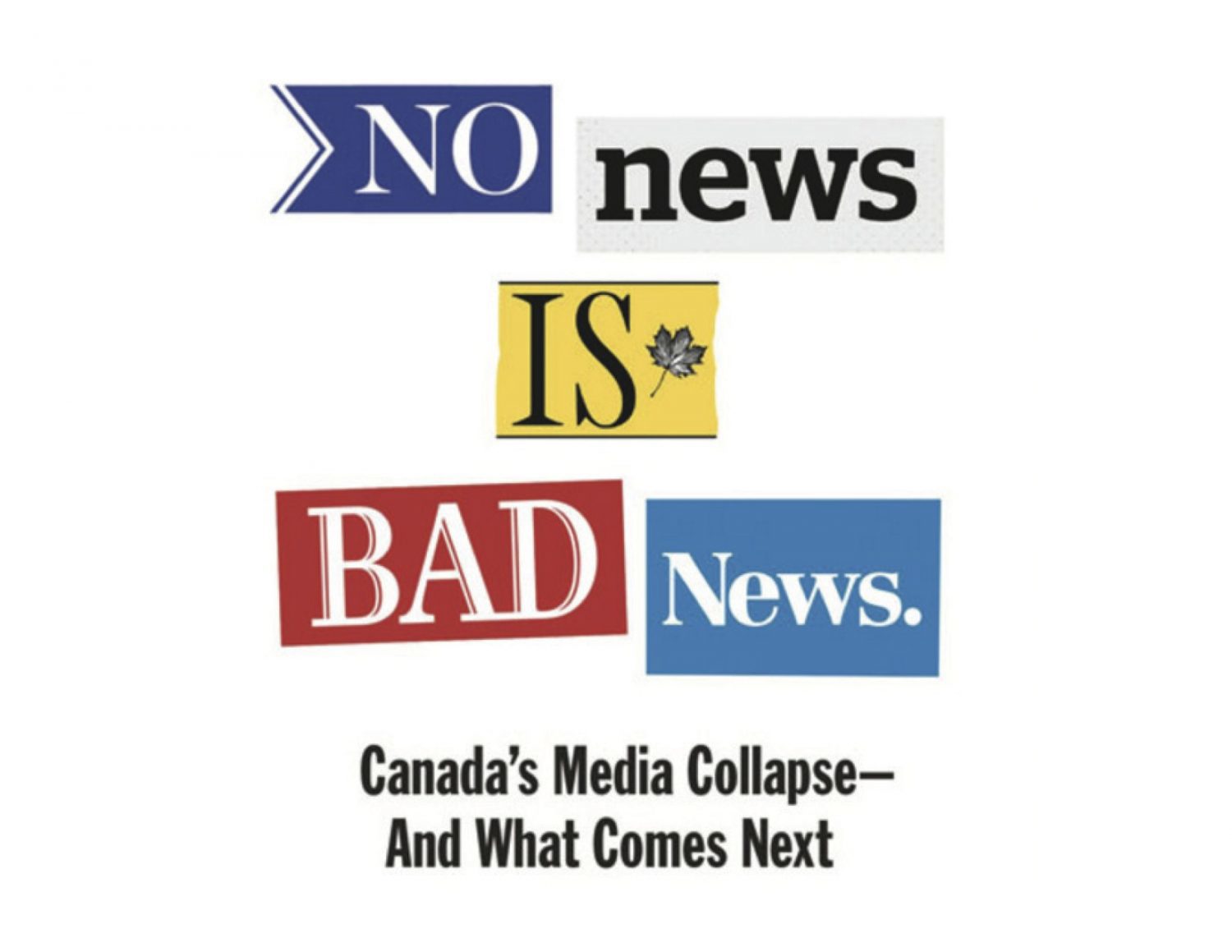 Why Ian Gill thinks No News is Bad News

Ian Gill had been out of the journalism game for almost 20 years. A former Vancouver Sun reporter who went on to make documentaries for CBC, Gill had become frustrated with the work he was doing.

“I just didn’t think that my journalism was really solving anything,” he told J-Source. In 1994, Gill became president and CEO of Ecotrust Canada, a charity that wants to build a “conservation economy,” according to the J.W. McConnell Family Foundation website.

But, to paraphrase Michael Corleone, just when Gill was out, he found he was pulled back in. Ecotrust was constantly using journalism skills to get its research out to wider audiences. “I found that the best way that we could do our work and get the resources we need to do it was in the frame of storytelling,” he said.

In 2015, Gill became a fellow at the J.W. McConnell Family Foundation. He proposed researching Canada’s media industry. The result is his book, No News is Bad News, a hard, 150-page look at the problems facing Canada’s media industry. Gill spoke with J-Source about his research and his new role at Discourse Media. This interview has been edited and condensed for clarity.

J-Source: I was at an American journalism conference in June, and I was really struck by a lot of the American reporters—they just really had this sense of, ‘Our job is to be holding people accountable, and to find solutions.’ Do you think that spirit still exists in Canada or has something changed or shifted here?

Ian Gill: I think the constant stream through journalism has been this notion that we need to hold people accountable. I think that a lot of journalists do feel that and haven’t ever really lost that instinct, but there’s a couple of things that have gone a bit soft or sour, if you will, in Canada.

The business model has been so under assault that the number of resources that are available to truly hold the holders of power accountable have diminished dreadfully. So it’s a nice idea to be speaking truth to power or holding power accountable, but it’s harder and harder to do when you have fewer and fewer resources. In the concentrated media landscape that I’ve described in my book, there are so many unspoken challenges to actually really doing that when your media businesses are beholden to investors and beholden to self interests to the extent that ours are.

I think there are a lot of reporters who go about their business everyday and think, ‘Look, solving world problems isn’t my job. My job is to go out there and point out that there are problems and then somebody else has to figure out what to do about that, if they care at all.’  I think that’s a slightly intellectually impoverished way of thinking of journalism.

Which is not to say I think we need a whole bunch of puff pieces and soft journalism about ‘wouldn’t it be nice if we could solve homelessness’ or whatever else. I think, frankly, solutions journalism is an often very tough, very hard-nosed traditional journalism that points out where problems are or where corruption is. The twist to that is it’s not enough to point out the problems.

It fills out, if you will, the suite of what’s available to journalists—not to just report on problems but report on solutions. And frankly it’s a lot more fun to do.

J-Source: In the book, it seems like you are very in favour of NGOs and charitable foundations getting more into the news game. You say they have this big opportunity to disrupt the current system. Why do you think it’s their time to do this?

IG: If you’re trying to mobilize information and mobilize knowledge, if you wait around for conventional media to do that for you, you are going to wait a long time in a lot of instances or you are going to be pushing up into a system that is almost preternaturally skeptical of any good in the world.

Or you’ll be a small non-profit or foundation that publishes stuff on website that nobody ever reads. I think the potential is to think about these massive distribution or syndication channels that currently exist, that are struggling to find content that’s affordable.

I actually do think that some audiences are so demoralized about what they read in traditional journalism that they just turn them off. So there are these big channels in which I think foundations and NGOs and solution-finders generate enormous amounts of research and actually spend a significant amount of public and private money on really interesting things that no one ever hears about. I think there is an opportunity in this kind of disruptive market to own some of that space in a way that this sector of society never has.

J-Source: How do you see that being different then public relations?

IG: I think there are a couple of hazards, one of which is of course is that people are divided on the notion of whether or not journalism should embrace advocacy in any way. Having been in the kind of advocacy building, I guess I’m more pro-advocacy than some died-in-the-wool traditional journalists.

There is the issue of how much of this is just advocating or promoting or doing public relations for a particular point of view and that’s an issue and its not one that one solves easily. But I personally believe there should be more advocacy in journalism, not less, because I think people are looking for opinion and they are looking for ways to make sense of their world that aren’t always by just completely straight-laced objective journalists.

Advocacy can be very tough-edged and tough-minded as well. It doesn’t have to be promotional and I don’t actually think that one needs to surrender reporting standards to advance some solutions in society.

J-Source: You went around the world and you talked to the Guardian and Neiman Lab and all those outlets. You mentioned at several points it’d be great if they could expand into Canada. Do you think that’s more realistic right now than doing something homegrown?

IG: I think that we could do something homegrown. I think there’s some potential to do some cross-border collaborations with some of the big American philanthropies with some of the smaller Canadian ones—to think about some investments in this whole area.

In terms of some of what I heard wandering around was, ‘Canada could never have a ProPublica.’ And I was kind of thinking, ‘Really? Why not?’ You know it’s not going to be ProPublica. We could design and build and deliver really, really good modern day journalistic product that isn’t built on the backs of failing legacy media—that is actually original and is robust enough to survive in a landscape that still wants good reporting and still wants media.

I don’t think we have to ask the Guardian to come and solve that problem for us or have the New York Times come and be the New York Times in Canada but I do think part of the way that these types of solution will get built is thought some really unusual collaborations and maybe the merging of some entities crossborder.

I don’t think there’s any reason why Canada couldn’t be a leader in this space.

J-Source: After I assume the book was put to bed, it was announced you are joining Discourse Media as the president. I was curious—did that decision come after writing this book and seeing all these ideas that were out there?

IG: I was looking at different media models and when I first had this inquiry about 18 months ago, people kept saying, ‘You got to go to talk to Discourse, you have to talk to Erin Millar.’ And so i did, and liked Erin enormously. I think she is brilliant and she comes from good journalistic stock.

So I kept coming back and talking to them and then as I transitioned out of my fellowship we sort of agreed that I would do a bit work with Discourse—one day a week on some strategic advice and then we realized that we were sort of had each other in our destinies. So Erin is still firmly the founder and editor-in-chief and my role is to sort of help build the business and make the case for Discourse.

To me the positive thing is nothing we are doing here at Discourse is in our minds a kind of a slap in the face of existing journalism, even existing business models, although we recognize some of those are failing fast. So we are not trying to build something on the ruins, if you will, of Canadian journalism. We are just thinking there’s the opportunity for a fresh approach here. We are not demonizing anybody who is remaining and continues to take an old approach. I mean maybe I do a little bit in my book, but in Discourse it’s forward thinking.

We are hoping that if we are smart enough to get something right here that Canadians will respond. They already are. It’s just remarkable how much appetite we see out there for something in the Discourse model. Our responsibility is to be careful about how we build this—so that we build something to last.

The future of newspapers captured in one photo?

Read More
The future of newspapers captured in one photo?